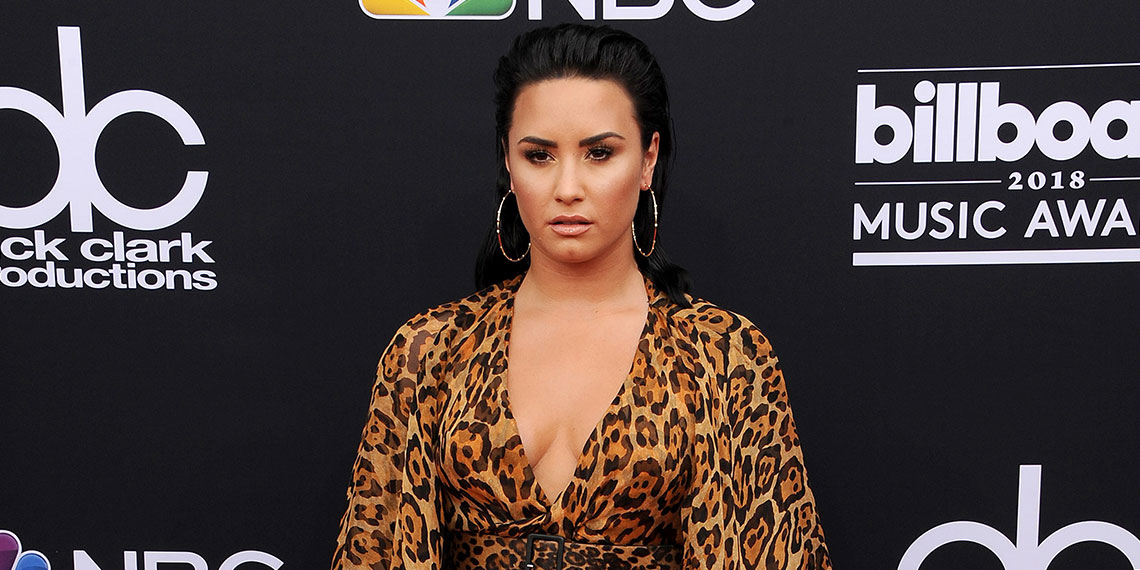 Demi Lovato Got Real About Recovery In Her ‘Ellen’ Interview

If there’s one person that literally everyone in the world is rooting for, it’s Demi Lovato. Currently, she’s making her music comeback a year and a half after an overdose that nearly killed her, and she’s finally opening up about some of the darkest times in her life. In a new interview from Thursday’s episode of The Ellen DeGeneres Show, she got real about her eating disorder recovery, and how toxic people around her put her on the dangerous path that led to her 2018 overdose.

The conversation started when Ellen asked Demi Lovato about her eating disorder, and how in the past six years when Demi came on her show, her team would go in the dressing room before Demi got there and hide anything with sugar in it. This was all happening after Demi had publicly struggled with an eating disorder. Demi said that she “didn’t know that until today,” and said that for the past several years with that team, she “lived a life…that I felt like wasn’t my own.”

Today I got to see my dear friend @theellenshow. I was lucky enough to sit with her and share my story from over the past year and a half. I was so emotional I cried when I walked off stage. Thank you Ellen for providing me a platform to speak my truth. Love you always and I’m so grateful for our chat today 💕 The journey continues Friday 💗

The controlling behavior of her team went way beyond the dressing room at Ellen. Demi continued “If I was in my hotel room at night, they would take the phone out of the hotel room so I couldn’t call room service, or if there was fruit in my room they took it out because that’s extra sugar. We’re not talking about brownies and cookies and candies and stuff like that, it was fruit.” Let me just say, if anyone ever tries to tell you that you shouldn’t be eating fruit because of the sugar, that person is an idiot. Even if you’re on a diet, a piece of fruit is not the problem.

Demi said that for the six years she was with this team, she wasn’t allowed to have a real birthday cake, only getting a cake made of watermelon (see—fruit!) with fat-free whipped cream. If you ask me, everyone involved with that “cake” should be arrested. Thankfully, she has a new team now, led by Scooter Braun, and she said that for her birthday this year, he gave her “the best birthday cake,” and she ate it with Ariana Grande. Speaking about this monumental change, Demi said “I just remember crying because I was finally eating cake with a manager that didn’t need anything from me and that loved me for who I am and supported my journey.” Wow. Taylor Swift might not have the nicest things to say about Scooter Braun, but thank god that Demi Lovato is finally with someone who lets her be a normal person for a change. Also, I would very much like to be invited to the next Demi/Ariana birthday celebration.

Going back to the problematic behaviors that messed her up in 2018, Demi said she feels it’s “dangerous to try to control someone’s food when they’re in recovery from an eating disorder,” which seems like a no-brainer. She says that relapsing into her disordered eating behaviors opened the floodgates for her to further relapse with her addiction. She told Ellen, “I was stuck in this unhappy position and here I am sober and I’m thinking to myself, ‘I’m six years sober but I’m miserable. I’m even more miserable than I was when I was drinking. Why am I sober?’”

When she reached out to her team with these fears, they told her she was being “very selfish,” and played into her fear of abandonment that stems from her relationship with her father. “I felt completely abandoned, so I drank. That night, I went to a party and there was other stuff there, and it was only three months before I ended up into the hospital with an OD.”

Coming out on the other side, Demi completely owns her actions, but it’s clear that she was put in a f*cked up situation by people who were supposed to have her best interests in mind. Still, it seems like she’s made peace with her own choices and is focusing on herself. Closing out her chat with Ellen, she said, “As long as you take the responsibility, you can move past it and learn to love yourself the way you deserve to be loved.” Damn, I am so proud of her.

Demi Lovato has been through an intense journey in the last couple of years, but she seems to be doing great, and she’s not just talking about her struggles. Also in her interview on Ellen, she said that she would love to make out with Rihanna, which like, same. If there’s anyone reading this who doesn’t want to make out with Rihanna, you can see yourself out. Demi also has more new music coming out soon, including a single tomorrow, so there’s a lot to look forward to this year from her. Whatever happens next, I hope she’s feeling happy and healthy, and eating all the damn fruit and cake she wants to.

Here’s the full clip from Demi Lovato’s Ellen interview, if you want to hear all her comments: