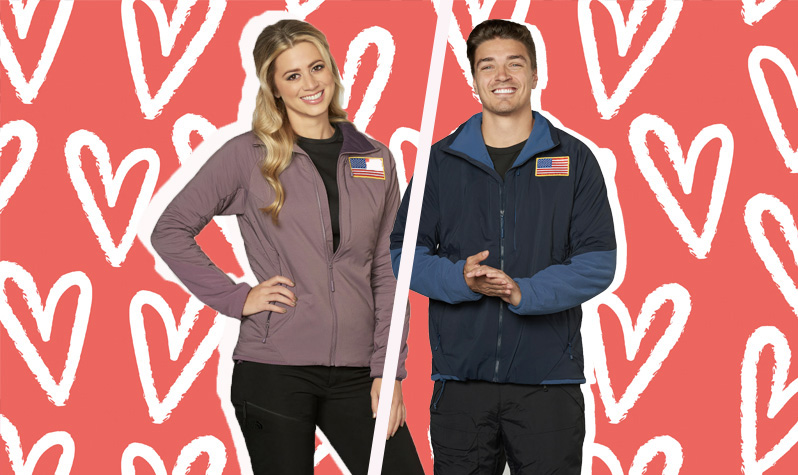 Lesley Murphy Won’t Be Having Any Deanie Babies After All

Well friends, that was fast. Here I am, cruising into the weekend, throwing side-eye and a little garbage at everyone that dares walk near my desk when I stumbled upon the most devastating news. We have not one but TWO Bachelor Winter Games breakups to drink to this weekend. I’m so shocked that these relationships did not work out. No one could have ever seen this coming.

Behind door number one, we have ultimate fuckboy Dean Unglert and his baby blues officially ending things with Lesley Murphy and her over-compensating social media posts, and behind door number two we have Clare Crawley and her French-Canadian fiancé Benoit Beauséjour-Savard. Let’s breakdown these breakups together, shall we?

I’m gonna be honest and say let’s talk about Dean first because he’s the hottest, amiright? E! News exclusively announced that Dean and Lesley broke up after four months together, and mentioned that things have been rocky for a while now. Are we sure D.Lo didn’t just show up in a bikini or something? Let’s be real. We all know that Dean needed a little image rehab after two-timing a Russian orphan on Paradise, and Lesley fit the bill perfectly. She was smart, pretty, and called him out on his bullshit. Of course she wouldn’t last. It’s okay Lesley, you can do better than this guy:

Just FYI, my favorite dinosaur is the pterodactyl, Dean. Call me! (What? He’s so pretty).

We understand A lot of you have been asking about our relationship since the show, and we wanted to thank you all for the love and respect as we navigated it in real life off camera. We do understand however, having a public engagement on TV kind of changes that. It’s with a heavy heart that we have mutually decided to end our relationship. We think the world of eachother, and we were both hoping we could make this work. I’m sorry that this may not be what you want to hear, but it’s our truth. Just know there are no negative feelings here, we are simply two people who believed in love, and were open enough to give it a chance. We still care for each other very deeply (That is why no hate or disrespectful comments will be tolerated about the other.) Please respect our privacy as well, as with the end of any relationship, it is never easy. Thank you for your understanding and love while we have shared our vulnerability with the world. ❤Clare & Benoît

First, what the fuck is this picture? I bet you a hundred buck those are not even Benoit’s feet. It’s a real hassle to get into America these days, especially just for a shitty breakup instagram post. Second, OF COURSE it didn’t work out. Clare wasn’t even into Benoit on Winter Games. If she can’t even fake it for the cameras, could she fake it in the bedroom? Doubtful. I also don’t understand why these Bachelor spin-off couples feel like they need to get engaged after meeting one time. A few sexts and one in-person meeting does not a relationship make. It’s like every time these people get on TV there is a Bachelor producer under an invisibility cloak with a gun to their head forcing them to propose. It’s the only explanation that makes sense. I guess we’ll be seeing Clare on a lot more spin-offs, but I think she should just be grateful she never has to change her last name to Beauséjour-Savard. That shit is hard to spell.

^Clare on Bachelor in Paradise season 95

One couple from The Bachelor Winter Games remains, and they are foreigners Courtney Dober and Lily McManus, a pairing literally no one cares about. Best of luck guys, may the odds be ever in your favor!