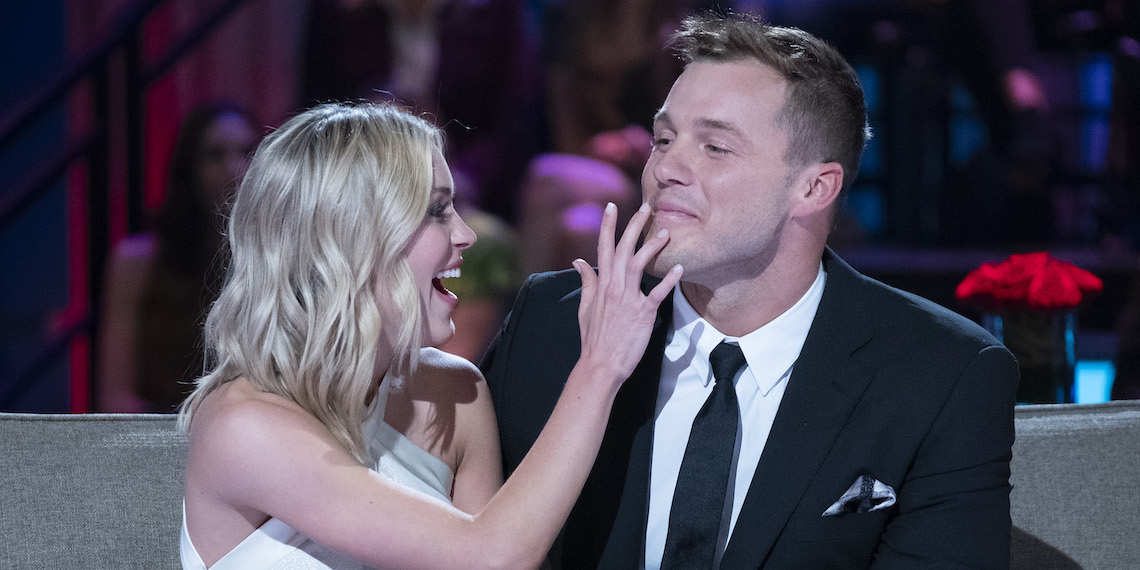 Colton And Cassie Are America’s Most Extra Instagram Couple

Last night, after weeks of complete uncertainty over who Colton would choose (I kid, we’ve all known for weeks), The Bachelor ended with Cassie as the winner. Unlike most seasons, there was no proposal at the end, but Colton and Cassie both took to Instagram to prove how in love they are. They’ve both posted twice since the finale aired, and all of the posts make me want to throw up in my mouth. What can I say, I’m cynical like that! And because I’ve had to suffer through reading these captions, so should you.

Before reading all of these sappy captions, it’s important to remember that this is a relationship from a TV show, so their entire relationship has to be taken with about a tablespoon of salt. I’m not saying that they’re definitely not into each other at all, but I have eyes and a TV and Cassie looked like she was uncomfortable around Colton for this entire season, including last night when they got back together. I guess things can change, but this is a pretty major 180 from when she literally dumped him in Portugal and he had to chase after her through the streets. (Reading that back, it sounds less like the beginning of a Nicholas Sparks-type love story and more like the intro to an episode of Criminal Minds.)

Whatever I write will never fully articulate the feelings I have for you. You are the most incredible person whom I have ever met, you have the kindest soul and the sweetest heart. You changed my life for the better and made this year the best year of my life. I can’t wait for our adventures ahead… I have my best friend. I have my girlfriend. I have my future fiancé. I have my future wife. But most importantly I have you. Let’s do this thing they call life… together… forever. I love you @cassierandolph

But back to these photos. Colton started things off with this picture of him and Cassie in bed, because being in bed together is a thing they do now. Don’t you guys know? He was a VIRGIN and now he is NOT! I really want to know who took this picture, because it’s either on a self-timer, which is the least sexy thing in the world, or there’s a third person in the room, which means the photo is 100% staged—and, I take it back, that’s the least sexy thing in the world. Either way, these two are already pros at taking staged candids that look good on Instagram. I see a bright future ahead of them!

In the caption, Colton calls Cassie his “future fiancé” and “future wife,” which would be sweet if we didn’t just watch him basically bribe her with a trip to Spain just so she wouldn’t block his number. That brings me to the end of the caption, which is by far the worst thing I’ve ever read:

Let’s do this thing they call life… together… forever.”

STOP. NO. I HATE IT SO MUCH. This is like Colton read a list of the worst couples Instagram captions and figured out a way to roll them all into one. I really can’t with this whole “doing life together” thing. Like, they’re not even engaged. Congrats Colton, you have a girlfriend, now please just leave us all in peace.

Sometimes it can be hard for me to find my words (as you all have seen haha)… it’s so easy for me to over-analyze and get in my own head, especially when my feelings are overwhelming or when big things are happening so quickly. So, here goes my attempt to put the past 6 months into words ? Stepping out of the limo on night one, I had no idea what was in store for me. The saying “God always has bigger plans in mind” has never felt more real to me than it does now. I’m honestly holding back tears as I write this, trying not to get too sentimental as all the memories and emotions flood over me while I reflect on this whole experience. I am unbelievably grateful for every single relationship that was formed with 29 amazing women, Colton and all the crew involved. It was a truly unique adventure that I got the extraordinary opportunity to experience. Everyone who has been beside me throughout these past 6 months (during filming and post), has helped me grow in ways that I couldn’t ever have imagined. I’ve learned things about myself, relationships, and life in general, that I would never have known otherwise. Thinking back to before I was cast on The Bachelor S23, I get chills realizing just how crazy it is that ONE THING has the potential to change life SO MUCH. ♥️ This past week, I took a much-needed break from my social media. I was allowing the opinions of others, and their sometimes cruel speculations, really get to me. That brings me to perhaps the truest, most impactful thing that this experience has taught me: to stay true to myself. Being real is something we ALL owe to ourselves. Regardless of the outcome, that is the one thing we can do to guarantee no regrets… to make the best decision we can in the moment. ?So cheers, my friends (and trolls) to The Bachelor S23 finale… may we all live and learn, be humble, and most of all, forever remain open to learning. Thank you for the opportunity to share with you all a glimpse into some of the most pivotal moments of my life. So far 🙂 #thebachelor

Cassie’s first post revealing her relationship with Colton features a caption that is almost 400 words long. If you’re wondering, so far this article is ~250 words, so congrats for reading 2/3rds of a Cassie Randolph Instagram caption. We’re so blessed. If you don’t feel like reading the caption (I support you), it’s basically a commercial for how going on The Bachelor can change your life. At the end, she talks about the pressures of social media, and how she’s trying not to let others get to her. Honestly, I’m just impressed she managed to type a short-form essay on a touchscreen keyboard.

I was going to wait until west coast aired to post this, but I am too impatient. So here it goes! The secret is finally out!!! Colton, you truly have my heart ♥️ Walking into this experience, I honestly wasn’t sure that true love could come from it. It hasn’t necessarily been the easiest road to get to where we are, but if that’s what it took to get here, then every single twist and turn has been undeniably WORTH IT. The last 4 months, just focusing on “us” have been amazing and you have become my best friend. You have shown me the purest, strongest love that any girl could ask for. You jumped a fence, took a risk, and challenged the “rules” to fight for us. I can’t even begin to describe how lucky I feel to have you by my side. I am so excited to see what is next for us in this new phase of our “journey”… I’d jump a thousand fences for you and “like, I know, I KNOW”? that I love you more than words, point blank♥️ ps. you still give me butterflies ?

One hour later, Cassie followed up her Insta manifesto with another post about her and Colton, this time with a mirror selfie of them kissing. Cool. After the first post, Cassie must have gotten a warning from Instagram about her caption length or something, because this time she kept it to one chunky paragraph. She talks about how things weren’t always easy with Colton, but they’ve built an amazing relationship in the last four months, and now they’re stronger than ever. (Said by every couple four months into a relationship because it’s the honeymoon phase.) Here’s the sentence I want printed on my tombstone:

You jumped a fence, took a risk, and challenged the “rules” to fight for us.

Damn girl. I don’t know if Taylor Swift is hiring any new songwriters right now, but Cassie should really hit her up. I’m happy that Colton and Cassie are happy, and I of course expected them to capitalize on the post-finale buzz, but these captions are kind of sending me over the edge. I really don’t want to know what their text conversations look like, but I’m imagining a lot of run-on sentences and butterfly emojis. Or more likely, they don’t speak to each other except for when Mike Fleiss texts them a reminder of the stipulations in their contracts. Ah, young love.

She doesn’t know this but I still have the butterfly from the first night. ?✌?

For his second post of the night, Colton went with a selfie in the car, holding the fake butterfly that Cassie gave him when she got out of the limo on the first night. He says in the caption that Cassie doesn’t know he kept it, but he tags her in the goddamn photo, so I think the secret is out.

Of course, all the faces of BachelorNation wanted to similarly capitalize on the finale, so there were dozens of Bachelor alums commenting on all their photos. I’ve done you all the service of condensing some of my (least) favorites:

First of all, 10,000 eye-rolls to Colton for still bringing up that stupid fence every chance he gets. We get it, you jumped over a thing once in Portugal, can we please move on with our lives? Jade chimes in to declare that “love wins,” which I’m pretty sure is a slogan that was initially meant to support actual issues like marriage equality, but sure, why not.

Caelynn is obviously sooooo happy for Colton and Cassie, especially because she was basically pimping Cassie out the second she got eliminated. Caelynn is probably still salty she didn’t get chosen to be The Bachelorette, but at least she can comment something nice on her friend’s Insta.

Aaaaand rounding things out, we have thirsty Ashley I. being thirsty, as per usual. “Giddy” seems like way too strong of a word for people she’s probably met like, one time.

Congratulations to Colton and Cassie, but you better believe they’re both getting muted on Instagram for the foreseeable future. We’ll see how many weeks these declarations of love last, before they revert to Flat Tummy Tea #spon and never mention one another again. I’m so sad this season is over, can you tell?