Cisgender Women: Removing ‘Feminine’ From Period Talk Does Not Diminish Your Experience

When you walk into your local drugstore and enter the aisle for period products, the words “feminine care” can be found everywhere — on the aisle signs, product labels, and packaging. This is incorrect and harmful because women aren’t the only ones who menstruate; nonbinary and transgender individuals can experience periods too. Yet over the last few years, as I’ve tried to use more terms like “menstruators” in my work — through my advocacy in the six years I spent leading PERIOD the nonprofit, in my book, PERIOD POWER, and now with the work we do at August — I often face backlash from cis women who are offended by the term, thinking it minimizes their worth to just being able to reproduce.

In 2017, activist and author Cass (@theperiodprince) posted a free-bleeding photo with a period stain on their pants, holding a sign that says “Periods are not just for women #bleedingwhiletrans.” In a Teen Vogue article, Cass shares, “I want cisgender people to understand that being trans while having your period can be absolutely terrifying. Aside from experiencing gender dysphoria and anxiety around the way my body changes during my cycle, I have to worry about which bathroom to use, whether or not me carrying a tampon or leaking could out me in an unsafe place, or being constantly misgendered because I couldn’t wear my tight binder that week.”

Kenny Ethan Jones is another trans activist who menstruates and was the first trans man to be the face of a period campaign. “Having a period already causes me a lot of dysphoria, but this dysphoria becomes heightened when I have to shop for a product that is labeled as ‘women’s health’ and in most cases, is pretty and pink,” Jones explained in an NBC article.

Schuyler Bailar (@pinkmantaray on Instagram), a DEI Educator and Consultant, Author, Speaker, and an Advisor to August, shared with me that, “‘feminine’ should not be used to refer to menstrual care not only because it is inaccurate but also because it reinforces harmful and limiting stereotypes about menstruation.”

Unfortunately, there is still a lot of learning that needs to happen for this understanding to become more mainstream. In the comment section of my TikToks talking about this, cis women have remarked that it would detract from their “sense of femininity” if the labels on period products were changed.

These responses are a reoccurring theme that I’ve heard from cis women for years, being upset and saying “I’m more than just my period, don’t minimize or simplify me.” Some cis women even find it dehumanizing, as written in numerous twitter threads saying things like, “it is dehumanising and epoliticising. As a menstruator, cervix-haver etc.” By calling for more inclusive wording instead of “feminine care,” some cis women think that the term is objectifying them and devaluing their other qualities and personality. I’ve heard from people that they feel it is like being called a “terminator,” like their period is a weapon — but that’s not the intention at all.

And of course, transphobia has existed at bigger, more mainstream levels — a prime example being JK Rowling. And this is just one example out of all the insensitive and hurtful comments that trans and non-binary folks face daily.

‘People who menstruate.’ I’m sure there used to be a word for those people. Someone help me out. Wumben? Wimpund? Woomud?

I don’t blame people that I meet who don’t know that not all menstruators are women, because I was also taught and grew up with this mentality. Since we were young, society has always told us that we magically “become a woman” when we start our periods. In fact, throughout history, there’s a repeated pattern amongst most societies that equates menstruation with women, gendered roles, fertilization, and giving birth.

“Due to the patriarchy, I think that the period industry has largely been used to exploit women, as most women-centric products unfortunately have,” Schuyler says. “It seems that the industry is slowly shifting to be made for women BY women – and there is great power in this; however, this can often exclude those who menstruate who are not women.”

Thankfully, that mentality is something we as a society are slowly realizing and progressing through. I believe that it’s vital that once someone is aware of this, they should seek the tools to be more inclusive in their language. Inclusivity is creating space for everyone and their diverse experiences —  it isn’t minimizing any community.

From one cis woman menstruating to another: creating space for inclusivity does not take away from the period experience! In fact, I think by contextualizing this more to our sex than to be a “woman,” it’s empowering. We are connecting it more to our actual bodies, and what is happening in our bodies, than to the gender binary and gender norms that society has imposed on us.

We have so much more work to do to make the period talk more inclusive. It’s on us as cis menstruators to seek out and actively learn from educators who have given time, effort, and space to talk about their experiences.

Schuyler says, “periods must be degendered because, put as simply as possible, they are not gendered. Biology does not have a gender…Degendering periods is not only scientifically accurate but also freeing of harmful exclusionary stereotypes that hurt trans and nonbinary people who menstruate.”

In a world in which menstruation is already so stigmatized, we must collectively do our own research to educate ourselves about inclusivity in the periods space. We must do our research, and start with a lot of listening, and acknowledging that uplifting trans and nonbinary folks do not take away from our personal experience. If anything, it empowers us to connect more with our bodies and build empathy for other communities. 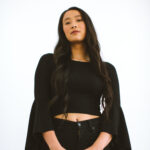 Nadya Okamoto is the co-Founder of August, a lifestyle period brand working to reimagine periods to be powerful. She is also the author of the book PERIOD POWER: a Manifesto for the Menstrual Movement, and founder and former Executive Director of the nonprofit organization, PERIOD. Nadya is also the former Chief Brand Officer and Board Member of JUV Consulting, a Generation Z marketing agency based in NYC, and has been recognized on the lists of Forbes 30 under 30, Bloomberg 50 “Ones to Watch” and People Magazine's Women Changing the World. She recently graduated from Harvard College.