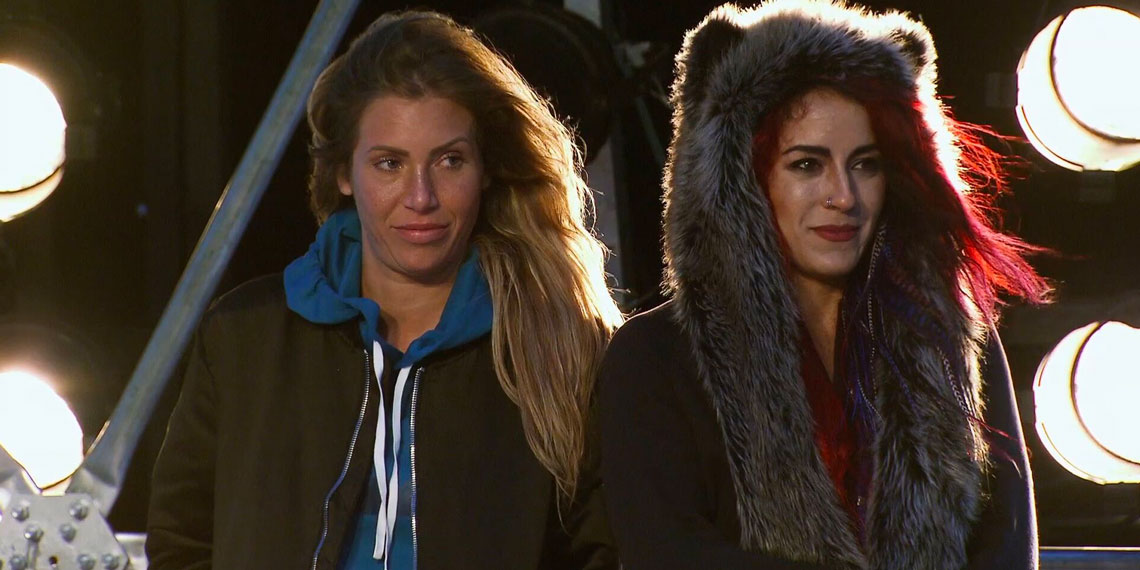 Before we jump into this week’s recap, there is something I’d like to address: After last week, I got into a war of words with Paulie via Twitter. I apologize to all the Twitter feeds I blew up that morning, as well as to Paulie. I’m sorry for saying you have a Napoleon complex. It’s not your fault that you’re short.

Now that I’ve cleared the air, last week Da’Vonne and Jozea were the stars of the show, losing in elimination and then pulling the double cross. This week’s MVP goes out to Natalie’s chest (if you remember anything from this episode other than how out and about her boobs were, I applaud you). If you got them, flaunt them, ladies!

We begin the episode poolside with Johnny making fun of a female player’s appearance. This is typical John behavior. My typical behavior: netting the pool so I can eavesdrop and get that good gossip. Amanda declares that if it wasn’t for this show, and Bananas being who he is on this show, Angela wouldn’t look twice. I agree with this. A short white guy is an off-brand choice for her.

Johnny retaliates by telling Amanda she would have no shot with Joss if it wasn’t for the show. A camera pans to my “oh no he didn’t” face, which sums up how I, and everyone watching, feel. Johnny also suggests that the female cast only hates Angela “cause they ain’t her.” The way he says this makes me cringe. I’m not Angela, but I don’t hate her for it. I totally blame my parents for my oily skin and resting bitch face.

I do blame Angela for this horrendous crime against blending, though.

At the redemption house, Angela informs some players that Nelson needs to control Shane. News flash, no one can control Shane. He’s “SHANELESS.” Jozea feels big and bad after pulling the double cross and warns that he’s on a kill mission. Whenever I watch Jozea interviews I always think of the donkey from Shrek. I mean that in the nicest way. He’s entertaining to watch.

Angela and Faith decide to place their bets on Da’Vonne and Jozea, saying their names at redemption elimination. Not to be whatever, but like, you all had no choice. Loyalty in the Challenge house can only go so far.

Faith says her nieces are more intimidating than Veronica, and I will forever decline any family gathering invites from Faith moving forward. Veronica scares the sh*t out of me.

Redemption players head out to the bar for what could be their last night out. After Tori flipped out on Jozea when they entered the house, Derrick knows the chances of his team getting picked are slim. In his last attempt, Derrick decides to turn up the charm with Da’Vonne. Before Da’Vonne even has to explain her extreme lack of interest in this situation, I start laughing at the idea that Derrick is really trying to go there. Da’Vonne is not the one, and neither are you, Derrick.

Natalie tells Paulie that she and Jozea have a million dollar friendship and trusts the fact that they will pick team PaNatalie as their opponents. I trust this too as. 1) They are all from Big Brother, and 2) Team Bad Girls are hella good.

At the main house, Kam is worried that one of the three teams she sent to Redemption may get back in the game. Meanwhile, Kyle’s still trying to figure out how the game works. Sylvia wonders if Paulie will freak out again. I wonder why someone told me that a pink turtleneck was a good idea.

Zach and Cara are having a one-on-one outside and Zach, AGAIN, speaks highly of Jenna. It’s really cute to see him finally treat her right. Cara appreciates that Zach has her back but acknowledges what I’ve been alluding to this whole time: Amanda, and the majority of the main house, dislike Cara.

Ashley has no problem getting rid of #TeamCaraMarie, and TBH I wanted to get rid of it too. The editing of the show is letting her get off easy this season. Cara is the worst.

Angela lets Faith know that she plans on reading everyone for filth at the elimination. Meanwhile, Natalie and Paulie are having a pow-wow in the kitchen. Here is the moment I stopped listening: I spent this entire scene fixated on Natalie’s breast and the high probability of a nip-slip. You’re lying if you weren’t staring too.

It’s time for elimination, but not before some players get their final word. Angela lets us know that she is our “Armageddon tonight.” It’s silent. Everyone is confused. Once Angela is done yelling, an eager Natalie speaks up to let Kam know she is disappointed in her.

Faith ends the “reading” by letting Kyle and the rest of the house know that she saw him sleep with Ashley. Just when we were about to finally say goodbye to the Kyle/Cara drama, a new flame ignites. Can we PLEASE for the love of God be done with it? The answer is no, BTW.

Both Ashley and Sylvia called out Natalie’s poor performance. How vigorously do we think Cara is hitting her keyboard to defend Natalie in her weekly recap? Get ready for the “empowering female” tweets that praise Natalie (while also shading other women on the show). You heard it here first.

Downstairs at the main house, Hunter lets Zach know that since Ashley lied to him about sleeping with Kyle, he can no longer trust her. Upstairs, Cara has similar sentiments to Hunter. She tells Nelson that Ashley has no concept of Girl Code. Sorry, back that up a sec. Am I hearing this right? Cara, honey, you do not get to call Girl Code on anyone. Not only did she aggressively pursue a taken man, but she betrayed my trust early on when she couldn’t keep my secrets. Cara is and always will be a hypocrite.

It’s challenge day and it’s time to eat sh*t. Throughout the elimination, people make note of how heavy their partners are. Cara was no exception. I was in the water before the whistle even blew. Later, she blames me for our lack of bags *pretends to be shocked*. I was most definitely not the problem on our team today, but I figured she’d say it was my fault.

Ashley and Hunter win the challenge with no problem; Hunter has perfected the art of eating absolutely anything. Since my team only had six bags, every other team only had to finish seven bags to stay safe from the purge. The eating challenge comes down to a battle between the girl/girl teams. Did I mention this season is extremely unfair?

We’re left off on a cliffhanger: Who will be purged? If Cara and I get eliminated today we join PaNatalie in redemption. Being stuck with the “Throuple” is at the top of my list of fears. Send me your prayers. I’m gonna need them.

Who do you think is joining PaNatalie in redemption?