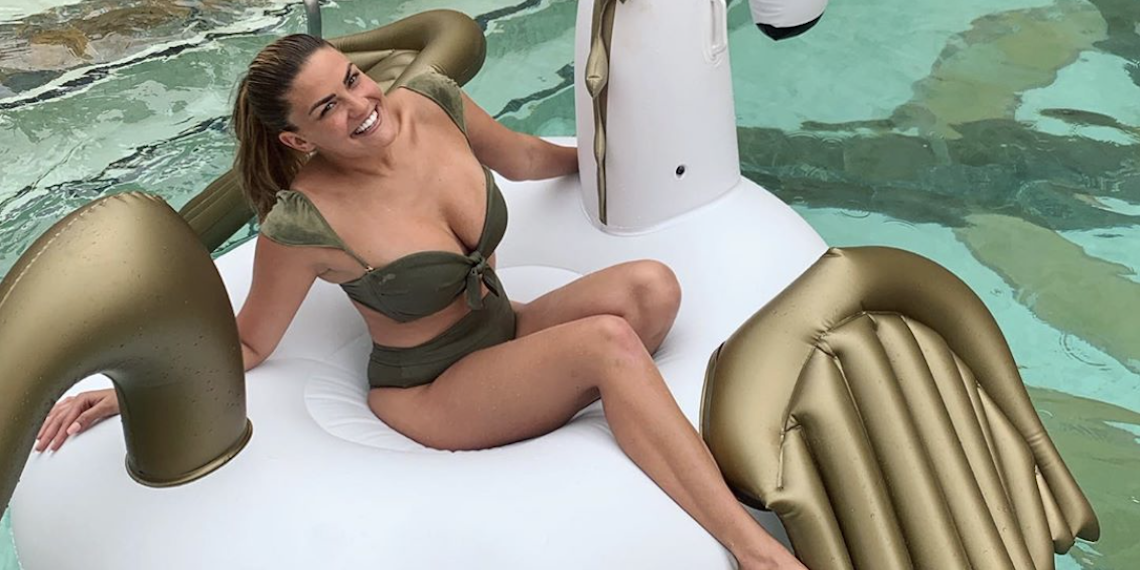 Celebrities Are Using This App To Make Their Legs Look Longer

If you read our weekly Photoshop Fail series, then you’re well aware by now that nothing on Instagram is as it seems. People are using half a dozen apps to edit their photos, and they’re not stopping at fixing the lighting and red eye. Because most people don’t have a solid understanding of how to use complex programs like Photoshop, everyone is always looking for the best, most simple app to look like an Instagram model. Enter Spring, which I found out about last week, and it’s already taken over my life. (I am not well.)

I first found out about Spring when my girl Bravo Historian posted about it on Instagram. She first noticed something was off when Brittany Cartwright from Vanderpump Rules posted a pic with some suspiciously long legs. The issue? These legs don’t look like normal person legs. And to top it off, Brittany has the classic Instagram influencer huge feet. Why does everyone on Instagram have huge feet??

For reference, here’s a photo Brittany posted a few weeks ago, when she was in Vegas with her VPR costars. Britt looks hot af, but her legs look…normal in length? Of course, it could all come down to a weird angle or something, but her legs are so prominently featured in the beach photo that I just feel like she did something to stretch them out and make them appear longer.

After she posted about Britt’s legs, one of Bravo Historian’s followers tipped her off about a photo editing app called Spring, and that was the moment my entire life changed. I need a calendar that just marks time by whether it happened Before Spring (BS) or After Spring (AS). Guys, this app is WILD.

The Spring app has been around for years, but for some reason, it’s not nearly as well known as some other photo editing apps. The app is almost too simple to use, and it has three features: slimming, height lengthening, and head resizing. I’m not really sure why you would need to resize your head, so I’m ignoring that for today, but the slimming and lengthening features are straight-up SORCERY.

Rather than some apps where you just pinch and pull wherever you want, Spring has you set lines for where your ankles, hips, and shoulders are, so it only stretches the photo in certain places. It’s some kind of dark magic, and it works. All of a sudden, anyone can be 5’10, and there’s basically no way to tell if your entire life has been a lie.

So, who’s been using Spring, or another app like it, to make themselves look nine feet tall? Bravo Historian pointed out this photo of Ciara, complete with the telltale big-ass feet, and I could see it tbh.

This photo is cute beyond words, but there was no need for Ciara to make herself into Elastigirl.

Kylie Jenner is no stranger to some janky photo editing, but this photo is still crazy to me. Look at her f*cking legs! And that big-ass foot! I feel like this picture was taken through a kaleidoscope with how confusing the angle is, but she looks way taller than 5’6. And with that being said, this is a great photo of Kylie, but this just isn’t how her legs look. Or really how anyone’s legs look, for that matter.

a ray of fucking sunshine

Could the epidemic of the big-ass feet be reaching all the way to Miley Cyrus’ hot girl summer trip to Lake Como? I don’t want to believe it, but come on, those legs look crazy! Maybe I’m just dumb and have been taking my photos incorrectly all this time, but I don’t believe that all of these women just look like this in real life.

Here’s mega influencer Chiara Ferragni chilling on a boat with some big-ass feet of her own. Her legs definitely look long here, along with the fact that her butt curves at basically a perfect 90º angle, which I’m not sure is a naturally-occurring thing.

Basically, either everyone with over a million followers on Instagram just happens to have big-ass feet, or there’s something a little more sneaky going on here.

While we don’t know if all of these famous people and influencers are actually using Spring, or another app like it, my curiosity was obviously running wild. Therefore, I had no choice but to download the app and try it out for myself. A few days ago I was hanging out at a guy’s apartment, and his lobby had a sick mirror, so I obviously had to take a selfie as I was leaving. Sue me, I’m vain. I popped the photo into the Spring app, lengthened and slimmed, et voila.

For reference, I’m six feet tall, so I don’t really need the help, but the angle of the mirror made my legs look a little stubby. I’m not Holly, so I won’t pick apart whether every line in the edited photo is straight as a ruler, but I’m pretty impressed with myself, if I may say so. If I were scrolling down Instagram and saw this photo, I wouldn’t automatically think that I literally rearranged my anatomy to look taller and thinner.

Okay, so my random lobby selfie was pretty good, but what really stopped me in my tracks was this annoying mirror selfie I took at the gym a few months ago. I was feeling pretty good when I took this photo, and I look skinny for me, but I put it in the Spring app and oh my GOD. Whose legs are those? Where did my stomach go?? Am I a Greek god???

Should I quit my job and become a model? You don’t have to answer, I already put in my two-weeks notice.

Honestly, I probably need to delete this app from my phone after I’m done with this article, because I can already feel it f*cking with my mind. I look at these edited photos of myself and I feel good, but that feeling completely disappears when I remember that it’s not how I actually look. Then I’m just left feeling worse about my actual body than I did before the editing. Brittany and everyone else can do whatever they want, but this is not the energy that I need in my life.