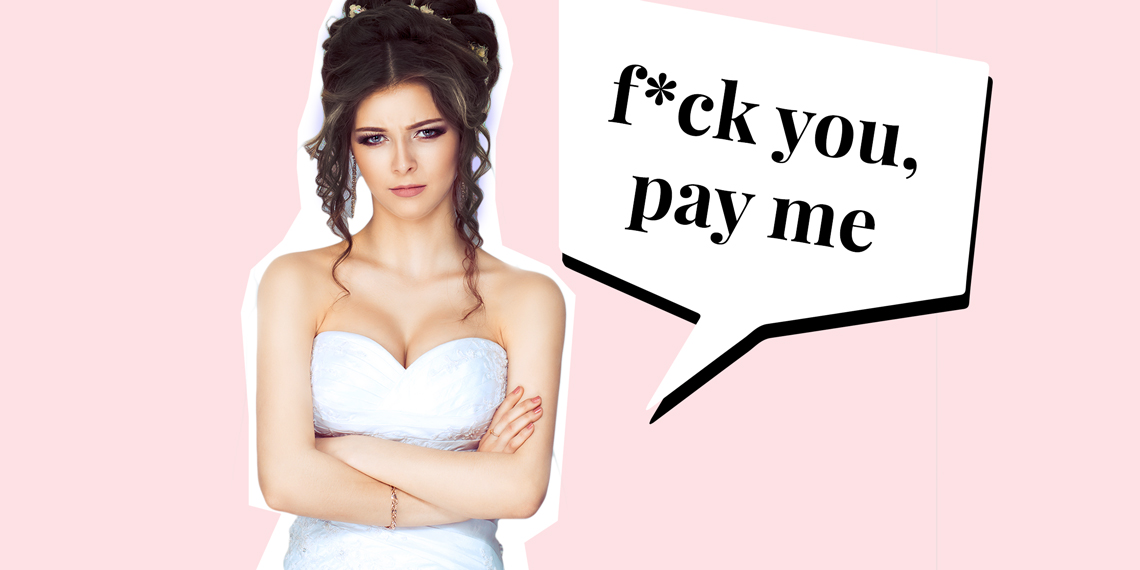 If you’re a bridesmaid who is one Etsy link away from dropping out of the wedding and changing your identity, let me tell you a story about a bridezilla that’s for sure crazier than anything your obnoxious college roommate has pulled. Only four days before her wedding, this insane bride allegedly called the whole thing off and broke up with her fiancé, who also happens to be her high school sweetheart, and the father of her son. I mean, people cancel weddings all of the time so that isn’t really that nuts. But, this betch called it all off because after asking each guest to contribute $1,500, basically nobody RSVP’d and she couldn’t pay for it. Yes, this bride asked her guests to contribute $1,500 EACH for HER wedding.

In a tweet that we should all thank the internet gods for making viral, Twitter user @0lspicykeychain (I’ll let the username slide because sharing this story is truly a public service) shared some screenshots from an insane post in a wedding shaming group. Sidenote: remind yourself to join a wedding shaming group later. Also, please remember that this is literally just a viral Twitter thread and if it’s all just a scam for favorites, none of us can be mad because this is the life we live in 2018.

If you have a solid 10 mins to absorb this, I present a very real status shared in a wedding shaming group I'm a part of

Honestly, this ex-bride must secretly be a YouTuber or something because the level of extra she develops just to begin the story is ridiculous. At the very least, she probably has the MTV Casting Calls page bookmarked.

“You’re all involved somehow, somehow everyone is wrapped into this mess. Even if you weren’t invited to my wedding, I don’t care,” the bridezilla wrote to a literal Facebook group. “You might hear of the drama and I’d rather you hear it from me. I’m not asking for sympathy. I just want to tell my story.”

The chick then goes on to explain that although she and her ex had saved up about $15,000, she requested $1,000 to $1,500 from each guest to fund her $60,000 wedding and also set up a Go Fund Me page. And no, scaling back wasn’t an option. Apparently, she visited a psychic who told her to throw a baller wedding and also thinks she has like, a god-given right to live like a Kardashian. Okay. The worst part is, she wasn’t even like, kind of remorseful about it. She literally wrote “Our request for $1,500 for all other guests was not f*cking out of the ordinary. Like, we made it CLEAR. If you couldn’t contribute, you weren’t invited to our exclusive wedding.”

Umm… I’m sorry, but half of the people you invited were probably pissed about the thought of having to buy you a KitchenAid mixer, let alone contribute to your wedding fund. Besides, it’s not like most of the money they’d be sending would actually go to them. According to The Knot, the average cost per plate is $268… and that’s when you factor in the states where you can pull off a decent wedding for 20 grand. I have no idea where this woman lives, but if she’s anywhere near the tristate area, $60,000 is not that far off for the average cost of a wedding. If she was actually looking to throw a Kardashian blowout, she was going to need way more cash than that.

Perhaps the worst part of this entire thing is that eight people actually sent back RSVPs with checks. These are probably the same people who are funding the lifestyle of the Nigerian prince who slides into old people’s emails and drains all their savings.

After homegirl realized she wasn’t going to be able to have her friends fund her “dream wedding,” she supposedly had a full-on panic attack when her ex-fiancé offered they get hitched in Vegas. Yikes.

Anyway, eventually the maid of honor and all of the bridesmaids dipped out, which led to everything else crumbling and the wedding being called off. This woman claims that she and her ex plan to remain civil, but she’s also planning a two month backpack across South America, so we’ll see how that goes.

So, yeah. There’s your daily dose of insanity. This b*tch literally wrote, “Just f*cking give me money for my wedding”—shocker that didn’t turn out well for her. If it turns out that this entire thing is a marketing ploy for some wedding reality show, I’ll be kind of annoyed, but I will absolutely watch it.