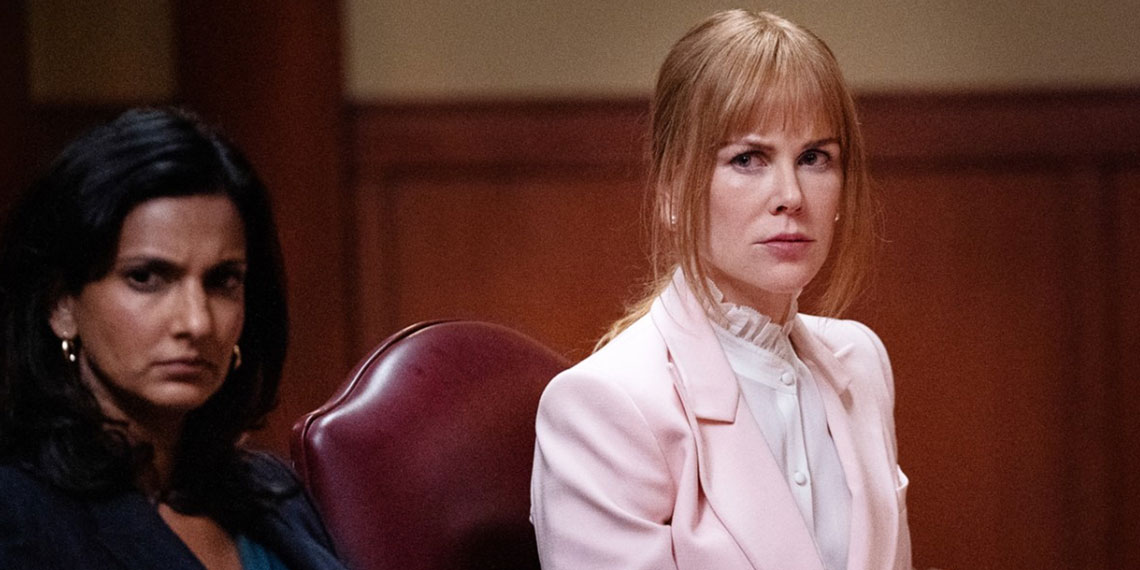 Well, we made it. It’s the series finale of Big Little Lies and I just woke up from a frosé- and heat stroke-incuded nap to watch how all of the insanity of this season plays out. Is Renata going to leave her piece of sh*t husband? Will Celeste go full Ted Bundy in court? WTF is happening to Bonnie? By the end of this recap, we’ll hopefully know all. Some of us have hated this season, but we can all come together and agree that we want Reese Witherspoon to adopt us and my skin will just never be clear, cleared up. Whatever, follow me on Instagram (@kashmeredanny) and let’s get into it.

I’m sorry, WHO was this season for? I feel like the majority of the actual fans were happy with it being a perfect and wrapped up mini series. We had ribbons on everything, justice was served, and everyone still had their gorgeous houses. It swept its limited series categories, our favorite gals got some Emmys to add to their mantles, and Reese had HBO wrapped around her fingers to produce hundreds more novels by female writers. Honey, that’s the dream! Well, if that was a dream, then season two, and this finale, was a nightmare.

Usually, when a show or movie gets a continuation it’s because there’s unfinished business or a great new story to tell. Welp, we truly had the opposite of unfinished business. There was no business to talk about. Other times, it’s because fans were BEGGING (Veronica Mars style), but nah, we were good. Maybe it’s because the stars were a little greedy and wanted more spotlight? None of these women needed Big Little Lies to pay for their SUGARFISH bills. So we ask why, and let me just tell you: much like this finale, you won’t get an answer as to why. What you will get? #BigLittleBlueBalls.

I’m watching this one with my mom, who hasn’t watched a single episode of the new season, which should be fun for me, and she asked: “I think you put on the first episode—they’re showing the murder scene and playing Janis Joplin” and I had to tell her no, that’s just kind of how every episode starts. Celeste is shocked at an iPad and Ed is trying to get ready for his workout class at Rumble, great.

Ziggy, adorable as ever, is basically being the muses to Jane’s Meg in Hercules. She won’t say she’s in love, but she should! This is about the time that, in hindsight, I should have just started watching that YouTube video. Mistakes were made.

Is this STARBUCKS PROMO? The actress that plays Chloe better get a cut of this ad money. Shout-out to Americanos. Also, when they went into this scene Meryl was 100% like, “Starbucks? Oh, it’s like a La Colombe?”

Oh, now Ms. Madewell Jacket is worried about her client. Katie, where was this strength two episodes ago? My mom also just said: “I completely forgot Celeste was a lawyer,” which we all did until this trial.

It’s showtime. I think I’m going to start shading people by just saying it’s my observation. THE JURIS DOCTOR IS JUMPING OUT WITH CELESTE. Oh, she got her with a K.O. and the car flashback of Mary Louise and Perry with her dead son is crazy. What’s crazier? How THIS WAS JUST BROUGHT UP NOW WHEN THIS COURT SESSION HAS BEEN GOING ON FOR WHAT FEELS LIKE DECADES. Literally, do lawyers know how to lawyer?

What’s even more insane? Celeste had video proof of Perry not only abusing her, but that her kids had knowledge of it. Girl, these are things that should have been brought up, I don’t know, any time earlier than 30 minutes before the show ends?

We all know a Madeline in the world who will take your trial and saying, “OMG I should have known!” Glad she was able to make the conversation about her for at least .8 seconds. Okay, I really can’t go from that intense court scene to the f*cking Fault In Our Aquarium. Jane’s bangs are splitting at the equator and her 19-year-old boyfriend has bags under his eyes, probably because he has an Intro to Communication final today that he’s been studying for all night. Glad they got to hug, though.

Mary Louise is now snooping around, but Celeste had the best come back of all time: you lost your boys, you don’t get to take mine. While it’s not a Renata flip-off, wow that stung.

Is it just me, or is it really hard to pay attention to any storyline besides Celeste’s? Followed by Renata’s. Bonnie’s storyline went from her jogging, to her doing yoga, to now her trying to kill her mom for the past three episodes? What kind of half-off pillow is she using? Meanwhile, Madeline’s storyline went back to feeling guilt about starting the lie, because even she lost interest in trying to see where she and Ed were going to go to brunch to talk over feelings. Also, glad we didn’t really wrap up Tori and Ed’s storyline. Everyone got mad at me because I didn’t remember her name, WELL THIS IS WHY. CAUSE MY SOUL KNEW BIG LITTLE LIES WAS GONNA DRIVE OFF THE PACIFIC COAST HIGHWAY.

Okay, we now know where Jane gets her bang goals from: Max and Josh. Hair is everything, Anthony. (If you don’t get that reference, watch Fleabag immediately. Talk about a satisfying finale). Oh, that was a quick blip because Ed is now trying to get his Barry’s on. Shocked Ed didn’t start singing ”We Are Never Getting Back Together,” since they love to end these seasons with him doing karaoke. JK, he wants to renew their vows? I will never understand rich people. A shot at a new beginning, The Hills: New Beginnings. Basically, Ed and Madeline are going to LA and helping Mischa Barton run lines.

While court starts, Bonnie has an issue of her own: her mom suffered another stroke. Honestly, this season (and maybe series in general) doesn’t know what to do with Bonnie. They just have her walk through Lululemon depressed. Justice for Zoë Kravitz.

Is this how courts work? Why do I feel like this is now becoming a spoken word battle, when in reality it should just be closing statements and a decision. CELESTE HAS THE KIDS. I literally started to cry? This is why you don’t drink frosé at 2pm.

Cut to the hospital again, and Bonnie’s mom passed away, and now B is wasting no time in bringing in the realness. Finally, Zoë gets a monologue that shows off her talent. Damn, justice is served in a sense for Madeline: she gets vow renewals, he gets hospital coffee and divorce papers.

Renata being told to calm down is probably the last thing she should ever be told. THIS MONTAGE IS WHAT WE NEED FOR HER. LET THE RAGE OUT. This episode really could have just been this scene and I would have been satisfied. Oh God, I really thought she killed him and that the series finale of this show would just be them doing “Cell Block Tango”.

This wedding is secret Pinterest sponcon and I won’t be told otherwise. And here is where the wheels really fall off. Mary Louise is going back home, like Swiper after Dora tells him to now swipe? Okay, drive safe. Jane is slow dancing again. Wow, I could not be more over a character in my entire life. Happy she can finally have sex with her secret life of an American Teenager boyfriend.

HIM SHIRTLESS DOESN’T MATTER because we have Bonnie’s final showcase, or WHAT WE THOUGHT was going to be her final showcase. She goes to the police department to confess, only for the Fab Five to arrive by her side. Honestly with the way this episode went, I’m f*cking shocked JVN didn’t just appear to glam them all up before confessing. Poor teenager got blue balls, prob. Wow this last scene is pretty gorgeous…until I REALIZED THAT WAS THE DAMN ENDING. No wonder this song is playing at the end because TAKE ANOTHER LITTLE PIECE OF MY HEART AND SEVEN MORE HOURS OF MY LIFE, BIG LITTLE LIES. WE DON’T EVEN GET TO SEE THEM ENTER THE DOOR?

In the words of Ally Maine: why did you do that, do that, do that, do that, do that to me? Is anyone satisfied with this ending? Or are you like me and Jane’s middle school boyfriend and suffering from major Big Little Blue Balls over that ending. Damn. Do we do a third season to find out what happened, or just blast thank u, next while obsessing over Euphoria?