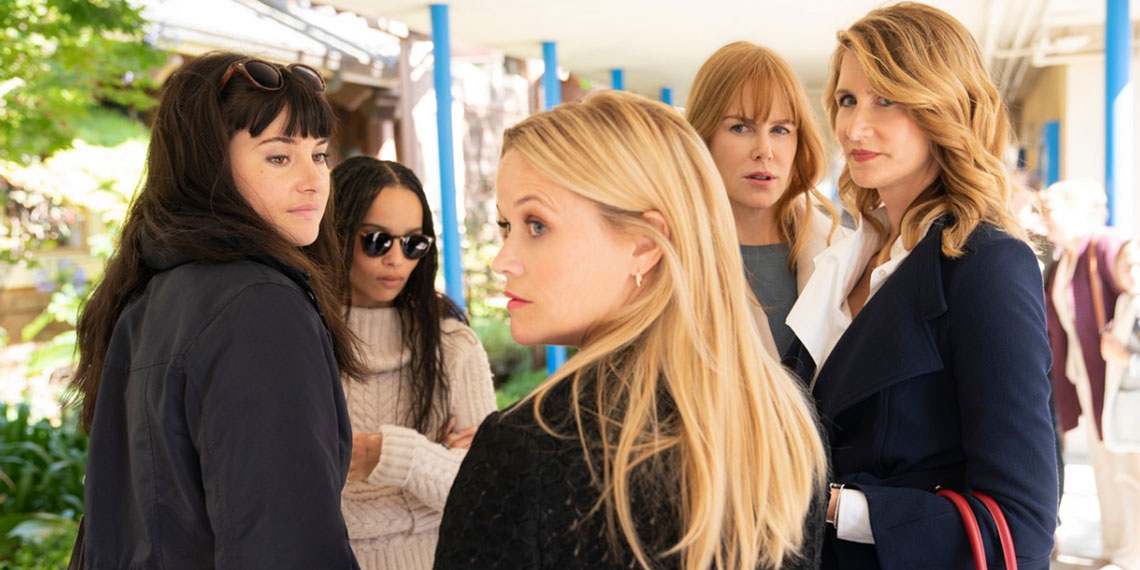 Going into this season of Big Little Lies kind of feels like going on a second date or grabbing the last slice of pizza: you’re excited, but also scared. What if it’s bad? What if it gives you a stomach ache? As a BLL purist, I personally thought that the first (and, at first, allegedly only) season was perfect and was initially against talk of making another season—but all someone has to do is say “Meryl Streep” and I appear on my couch at 9pm, pinot noir in hand, ready for whatever may happen next.

^Reese to me after reading this recap.

We’re back with the Monterey Five, and no, that’s not the name of a horse in the Kentucky Derby—it’s the unofficial nickname of all the main ladies after the scandal. In case you forgot, the first season was gorgeous and perfect and was all about these rich moms who ended up killing one of their husbands because he was an abusive piece of sh*t. And that’s what you missed on Glee.

Let’s go into this with a breakdown of what each character did—or more likely, what type of wine each character drank while staring into the beach. Andy Cohen, are you a secret producer on this? I’m pretty sure 45% of this script is “look longingly and think about how now you have to go against Game of Thrones in the Best Actress category now that you’re no longer a limited series.” The horror.

A more in-depth breakdown is below, but some general observations on this premiere that don’t really matter, but mattered to me:

A musical moment happened at an assembly (maybe this really is Glee) and some girl I 100% forgot about named Tori got a boob job. Happy for her. My favorite moment of this episode was her talking to Adam Scott’s character (Madeline’s husband whose name truly doesn’t matter) in the grocery story surrounded by melons. GET IT? I feel like the writers were like hmm, should we have his character cheat on Madeline as payback? But then realized that he’s just a quiet dork and moved on. Also, does anyone actually use the car speakerphone option besides these five women?

I decided to breakdown this premiere episode by character, because the last time this show was on the air, I could still fit into my skinny jeans (well, fit is a subjective word, but they got above my knees at least). Seriously, only HBO has the confidence to drop a new season of a show two years later and be like: wait, you don’t remember this side character who had one line in episode four? Weird. So let’s check in on the Real Fake Housewives of Monterey.

The queen bee is BACK and her daughter Chloe is still cool AF. Like, I can’t wait for her character to just pick up and move to Brooklyn for high school. It turns out me and Madeline have a lot in common because we both like to double fist cupcakes, get annoyed when someone expects us to do work at work, and are kind of a bitch.

I guess she’s traded in directing community plays for being a realtor—but I was kind of disappointed that the only major drama she deals with this episode is that her kid no longer wants to go to college. Girl, you’re ahead of the curve—all I gained from college was a slow metabolism and ten guys named Chad’s number who I’ll never text. What’s worse: your kid not going to college or your kid saying “I want to work at a start-up”? Sidenote: Reese Witherspoon needs to write the TV movie about the college admissions scandal cause she has the finger on this pulse. Felicity, you’re cool with that, right?

YES HER THERAPIST IS BACK but still only half-lit on a chair that looks like it was clearance at Pier One Imports. These were personally my favorite scenes of Celeste’s last season… well, besides that one where she was just sitting on a balcony drinking Smartwater. Her character is having nightmares and may be spiraling, which is fair since she’s trying to cope with the complexity of the loss of her abusive husband. I already can’t wait for her to cave and tell her therapist about what really happened just to watch Reese Witherspoon flip out and scream Withherglassofsauvblanc. Apparently she’s also giving Jane some checks that she’s not cashing from his estate. In case you forgot, Jane’s first season storyline was focused a lot on her trying to find the man who raped her (and try to maybe kill him), and that person turned out to be Celeste’s husband.

Bangs happened, and they happened hard. I guess since Shailene makes her own toothpaste, she also does her own haircuts. Uh-oh, she’s working at an aquarium now, which I’m certain was a demand from Shailene ’cause she loves the environment (I mean, same girl). Hats off to HBO for having her give us a fact about an octopus to serve as a metaphor for the show. Ladies kill. The prettier something is, the more dangerous—which is why no one ever crosses the street when they see me. I’m the definition of harmless. Watching her dance on the beach in a Patagonia made me very happy I’m not a beach person, and also very happy that I live in New York. I dare someone to dance while jogging down the street and not get spit on or have a pigeon poop on them.

Please PLEASE tell me her coworker isn’t 17 cause they’re 2000% going to f*ck. Or maybe not because he just went up to her and asked if she was on the spectrum? I’m going to say 33% of the scenes this first episode were as necessary as the 7th shot of tequila I had Friday night.

The weirdest thing is Jane now asking if Celeste hates her for sleeping with her husband (when he assaulted her) and also drawing Taylor Swift Reputation-era fan art about him, which looks like it will bode on an insane obsession to come. This just confirms my theory never to trust a girl with #BluntBangs. Prove me wrong.

Apparently a yoga retreat changed her, and potentially not for the better. This is why you don’t go to Tahoe—especially because you get bitter that the group chat carried on without you, and now has a new inside joke as the name. As Madeline says, there’s some sh*t that you can’t just put on Gmail. Like the details of your one night stand or thoughts about the murder you all committed. Her character is getting all the flashbacks from the murder, which makes sense because she’s the one who actually pushed him. Not much has happened with her this episode, besides Bonnie being elusive and apparently installing the most annoying doorbell ever. Literally, all she did was just walk around and sigh, which made me confused: is this HBO or an old episode of The Hills when Lauren Conrad had to work aka send one e-mail? Let’s see if she ends up confessing to the police, or maybe Madeline will just pull a You and lock her in a chamber in her basement before she has the chance.

Laura Dern is still a national treasure and being The Most kind of mom. Her new kids’ teacher is very hot, so I’m personally starting a prayer circle for them to have a hookup session. Wait, now they’re making her have a photoshoot and sing, WHAT IS HAPPENING. As much as I #FeelTheDern, her singing with a bright flashy blazer served me a mix of the Sex and the City 2 karaoke scene and a drag show I saw last week. Kind of into it, though. While she’s doing that, her husband apparently nursed a drinking problem and a toy train collection. Something tells me he’ll be the next husband all these women go after.

Wig. For being a gay icon, the wardrobe department really did her dirty. But moment of silence for having her on TV. Seriously, we all deserve some Streep on our TV screens after the awful mess that was the final season of Game of Thrones.

She’s serving Mrs. Doubtfire energy, but I do love how this character gives a nice breath of fresh air in this world. Bringing her into the mix gives the series more layers besides people just shouting their children’s IQ. And by layers, I mean insane layers of her character screaming and crying while at dinner and also the insane layers of her wig. Sorry, I’m still not over it.

Best quote? “I don’t mean that in a negative way, maybe I do.”  RIVALED ONLY BY “who are we planning to kill?” Wait, is my Summer 2019 energy Meryl Streep being a bitch? I don’t hate it for myself.

Overall, this first episode was kind of slow, but I am excited to see where this goes. I also am obsessed with the sparring match of Meryl vs. Reese. Honestly, with the talent of this cast they all could just be reading my past Seamless orders out loud and it would still be interesting (and not only because I can go off with my selection of side sauces).