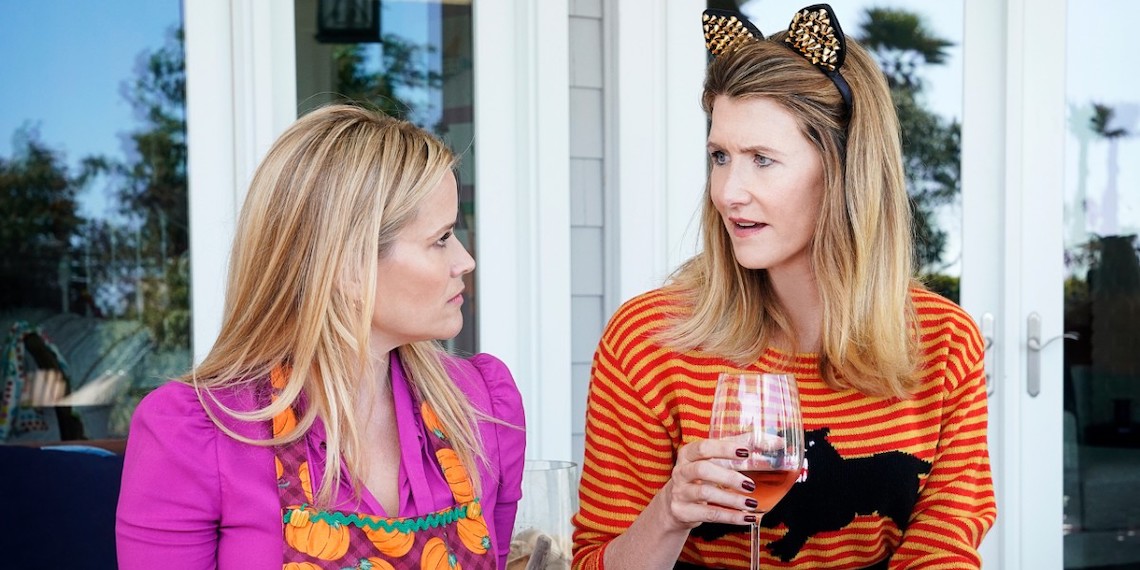 It’s Madeline’s turn to have a nightmare, which I guess makes sense cause a) murder and b) it’s apparently Halloween! I forgot that weather isn’t a thing in Monterey. She’s also now smoking, serving us big end of Grease Sandy Energy. On top of that, Renata is simultaneously planning her bankruptcy court hearing and also her daughter’s birthday. ¿Por qué no los dos?

Naturally, Mary Louise arrives with a cake and her chompers—in no way are those her real teeth, right? Uh oh, Mary Tyler Moore has a new Rhoda in town, and it’s M.L. who is moving into Jane’s building. Survey says she’s doing that to be closer to Ziggy and not cause it’s the only property in Monterey. Kind of like when Taylor Swift bought a house in Rhode Island to be closer to the Kennedys. Throwback!

Giving Madeline a break, Celeste is now verbally sparring with Mary Louse until IT BECOMES PHYSICAL SPARRING WHAT IS HAPPENING. Celeste hits with a slap heard ’round the world after Mary Louise says she feels Jane wasn’t raped and Perry just was looking for anyone outside of their marriage.

This scene of course ends with Madeline in her gorgeous kitchen, complaining to Ed about how people should be more considerate when planning parties (“we all have calendar apps on our f*cking phone”) and can I just say, preach?

Longing Looks At the Water: 2

In between scenes, we see Bonnie also staring at the water and Jane inviting her school yard crush to the disco party, an era he 1000% learned about during AP U.S. History last year.

Celeste, Bonnie, Madeline, and Renata all have the same calendar. pic.twitter.com/s4igIkd7Jm

All The Tense Coffee Dates

Mary Louise meets with Celeste and calls her unwell, expressing concerns about her grandchildren. I’m sorry, but is Celeste’s style inspiration Taylor Swift’s Red era with these whispy framed-bangs and coat? Mary Louise brings up that her husband left her and she had to learn how to cope—a fact that hmm…I’m not that sold on.

Over at Madeline’s, she tries to plan a couple’s workshop while Ed is still giving us Sulking Kid Who’s Grounded. Chloe, still being a 28-year-old social media manager in a child’s body, makes an ‘opposites’ project for school where she says her mom is the opposite of a door because she’s unhinged. Snaps for Chloe and her future career on Thought Catalog.

Bankruptcy Is So In Right Now

The assets are being drawn up to get put on the line. Renata is still giving us all the lines that would end up on T-Shirts for the Women’s March: “I’m self-made.” She then gets judged for getting botox, which, hey, not fair. On top of that, she needs to give up her Rolex and wedding ring right on the table — which I guess shows the practicality of belly rings in times like this. Impossible to see! And now their Tesla is traded for a taxi outside of the court house. Ouch.

Who Is This Theme Party For?

Amabella’s party is here and it’s disco themed, which I can’t imagine she picked. The moms have gone all out for this party, because when you’re 40 all you want to do is get ready for a theme party, apparently? While Renata is serving a disco bash, Mary Louise is planning on filing for guardianship of her grandkids—and making sure Celeste doesn’t have a lawyer to choose from to get her back. Back at Studio 54, Celeste and Bonnie are regretting the lie and saying Madeline is to blame for starting it. Very happy my major lies only including eating the rest of my roommate’s hummus and saying, “hmm no clue where it went.”

While they fight over gorgeous champagne flutes, we see Ammabella having a slow dance and her dress is… literally the same as Renata’s. This is truly some Gypsy Rose Lee sh*t up in here, but I guess the Roman Empire was having a BOGO deal. Ugh, it’s hard to see Renata addressing how all of this will affect her daughter—and can I just say F*CK GORDON.

Jane is dancing with her date, which is kind of weird because the dance floor is like, only the kids—but then again, he prob is in the same history class as most of them. She’s happy, but then the second they get a little closer, she gets a flashback to the night of her attack.

Bonnie gets #ConfrontedOnTheDanceFloor by her mom, with her mom saying she doesn’t like the energy around her. Raise your hand if you have gone up to one of your friends at 2:30 AM after a vodka Redbull and said the exact same thing.

Nathan and Ed then do what any man would, which is fight in ’70s costumes at a child’s birthday party. THIS IS ABOUT HAPPINESS!! Coincidentally, that’s exactly what I shout at my brunch waiter when they say the two hours of the unlimited option is over.

No eight-year-old’s birthday party is complete without a disco dance show by who I can only imagine is Boyz II Monterey. They’re setting the mood for Bonnie and Ed, though.

Jane opens up to her boy about her past trauma, and he is super supportive of her…which only makes me feel like he can’t be trusted, because this is Big Little Lies.

Bonnie’s mom has flashes of water visions and then faints. We’re at the hospital, and it turns out Elizabeth had a stroke, and we find out that the last thing she saw before were flashes of water.

Madeline and Ed are home, and he’s drinking the classic Sad Boi Night Cap: an IPA. Jane and Celeste are now out at a bar, and I do love how their bond has been strengthened. Celeste stays for another drink alone, cause she’s a girl after my own heart.

Back at the hospital, Bonnie is looking over her mother as her dad asks if she said anything to her mom to induce her stroke—nice dad!

Mary Louise is now eating stretchy cheese pizza that straight up looks like it’s from Chuck-E-Cheese—a place that Meryl Streep 200% doesn’t know exists. Honestly, she looks like a mess right now too. Why did the wardrobe department decide to give her a J.Jill cardigan, but then a men’s Old Navy top?

Jane goes to meet Bonnie at the hospital, which is perfect because she caught her just as she was about to rip into the detective on their case. Does this detective have anything else to do but walk around Monterey drinking coffee? Dream job TBH.

Ambien Cool, Not All Uncool

Mary Louise brings the kids home first thing in the AM and Celeste seems…off. At first you can’t tell if she’s high, drunk, or sick (I can relate to that every Sunday morning), until you realize that she definitely took another Ambien. She’s being very Countess LuAnn, owning it! I’m happy Heather Thomson wasn’t in their house because OH YEAH, CELESTE TOOK THE BARTENDER HOME. Wow that might have been one of the most awkward scenes in history, mixed in with a hot af flashbacks of them hooking up.

She confesses to Madeline that she did in fact take Ambien and didn’t remember he was in the house, which is so scary. Celeste, just try melatonin or chamomile tea, please. Madeline is the true MVP of friends because her first response was “she shouldn’t have dropped the kids off that early, you have your own life.” And just like clockwork, Mary Louise reappears.

She confronts Celeste about how she feels she is a mess and shouldn’t be watching over the kids. This is going to get messy. Yeah, they’re at risk with Celeste, but were totally just fine with their abusive father.

Renata’s Sweater Is Off The Deep End

What would happen if Ann Taylor had a one-night stand with Hot Topic and then found its way to California? The answer is Renata’s sweater. What is happening here? I guess when she tried to give this one to the bankruptcy court they were like… actually you can keep that. They’re sharing avocado toast (who shares toast?) and catching up about Celeste when, you guessed it! Our detective is back, drinking coffee, and just…theorizing! Nancy Drew could never be this caffeinated.

Jane then goes to see Mary Louise because she’s worried that she’s just being a Pokémon Grandma, catching them all. She calms her down by voicing concerns about Celeste, which Jane pauses to consider. Instead of borrowing sugar from your neighbor in Monterey, you borrow theories about your friends. Kinda into it.

THE THERAPIST IS HERE!! And she’s assuring Celeste that she has doctor-patient confidentiality. Of course the true star of this show would have her back.

Elizabeth finally wakes up and we see that she has a vision of Bonnie killing herself in the ocean, which, sadly,  could definitely be where this season is headed. Hopefully she’ll be able to help her and they can all go to another yoga retreat. Until next week!