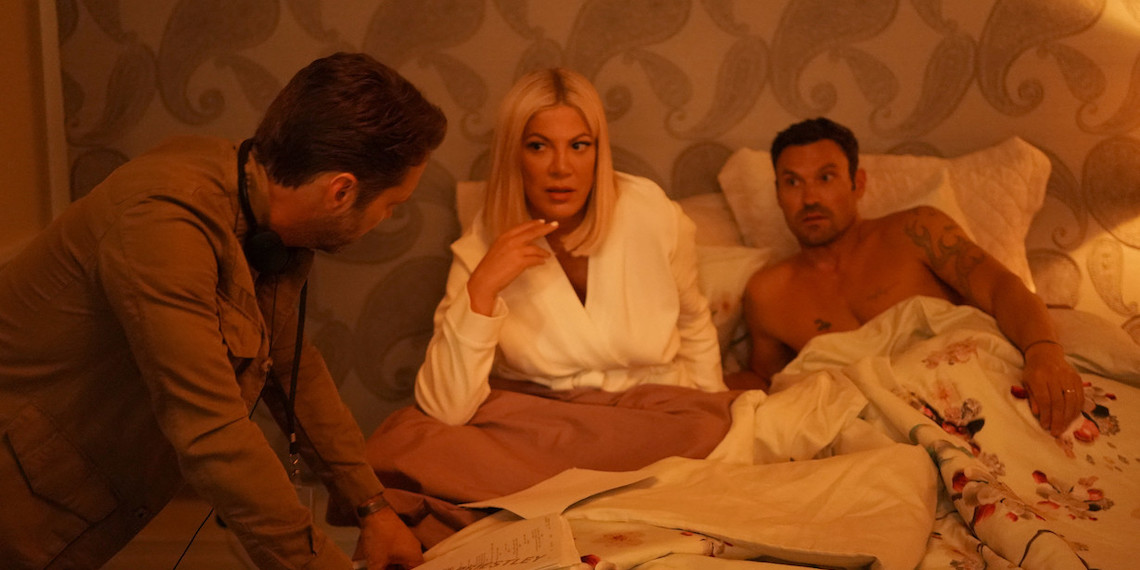 Aaaaannnndddd we’re five for five when it comes to dream sequence openings, but this time we get Brian Austin Green shirtless and putting out a fire with his t-shirt, so I really didn’t want anyone to wake up. Unfortunately, Brian does wake up, and we’re brought back to the harsh reality of this 90210 reboot.

If you’ll recall, the last episode ended with the entire set burning down, but we somehow still have The Peach Pit set, so filming must go on. Of course, the very first scene being shot is a love scene between Brian and Tori, leading me to believe that Tori is full-on still in love with Brian in real life and created this entire reboot to be able to kiss him again.

Brian tries to buddy up to his new-found stalker-turned-son, Zach, offering him a job on set as a production assistant, and then quickly telling him it would be okay if he wanted to call him Dad, which was so cringeworthy I wanted to throw my TV out the window. Zach tells him it’s weird…because like, duh, especially because Brian has yet to tell anyone about Zach, including his wife or other children. Brian acts all embarrassed, but he’s so cute it doesn’t matter and I immediately forget about how awkward it was. Frankly, if Brian Austin Green asked me to call him Daddy I would jump at the opportunity.

Before they begin filming the Tori/Brian sex scene, Emily Valentine reappears like the loch ness monster rising from the sea, and announces that the production has been shut down, yet again. They can’t film because they’re uninsured, and nobody will insure them until they find the stalker, so naturally the cast decides to take things into their own hands and go find the stalker themselves. Emily Valentine tells them if they don’t find him by the end of the day, they’ll all need to clean out their trailers—that they’ve all fully moved into. Tori Spelling has all six of her children, a big screen TV, a dog, and a literal f*cking live chicken in her trailer when she’s supposed to live a fifteen-minute drive away, but it’s better than the weird mountain-yurt-esque trailer Shannen has put together.

Gabrielle is still confused, receiving flowers from her poor, sweet husband while also navigating a sexual relationship with snake-woman Emily Valentine, who demands she sign a release saying she won’t sue over anything to do with their relationship. Gabrielle doesn’t want to sign it because she’s not out to anyone, and doesn’t want her coming out party to be signing a piece of paper, which like, calm down Andrea, it’s not that big of a deal.

Jennie has started dating her bodyguard who, despite being super hot, is boring AF. She starts pretending to like whatever he likes and we’re quickly given insight to her three failed marriages. She then debates whether she and hot bodyguard should sign a sex contract like Gabrielle and Emily Valentine, and there’s an uncomfortable joke about #MeToo and how they all miss the 90s.

As they’re all heading out of a meeting discussing the hundreds of people that hate them and could be their stalker, Tori falls down the stairs and is suddenly reminded of Ray Pruit, who in season six pushed her down the stairs, and in doing so accidentally destroyed his whole career. Fans literally ruined his career and sent him tons of hate mail as though he had pushed real-life Tori down the stairs, and this, the whole gang decides, is why he’s now going after them. They find him singing in a dive bar and he tells them he’s now a passionate fire fighter who would never set a fire! He fights them! Ah, yes! Logic! Also, depressing! As they’re apologizing for accusing the failed actor of being obsessed with them, they get a call from Jason saying they caught the real stalker: a bizarre-o super fan who owned the dress they stole in the pilot episode.

Now that we’re all safe and insured, the pilot can finally start shooting again, and Tori explains to the girls how she’s super nervous about the sex scene and doesn’t know if it’ll be better if Brian gets a boner or if he doesn’t…what’s a girl to do!? Tori spots David walking to the craft services table and follows him quicker than I follow any dog account anyone sends me. “SO, DEEP THOUGHTS, DONNA AND DAVID, HOW HAVE THEY MAINTAINED THEIR RELATIONSHIP THROUGH THE YEARS!?” She screeches at a quiet, forlorn David, who’s simply trying to learn his lines. “Well, their relationship is imaginary…” he answers, ignoring her while also being crazy hot.

They try filming the scene, but Jason won’t shoot her from the right side, so she refuses to continue and runs off set using a comforter as a towel. She tries again the next day but freaks out when Brian, who’s preoccupied with the fact that he has a new child, is acting distant. She decides to hire an “intimacy coach,” who comes on set to make sure everyone’s comfortable and happy. When they start getting into the scene and Brian brushes up against Tori’s boobs, the intimacy coach calls a cut, activating Tori screaming “THIS IS LIKE THE HANDMAID’S TALE!!!” She has literally been waiting twenty years for Brian to brush up against her boobs again, and the disdain and disappointment in her eyes is the best “acting” she’s delivered so far.

Jason decides he can’t raise someone else’s baby and wants to leave Vanessa Lachey, but Jennie tries convincing him not to, because now that she’s in a committed relationship with her bodyguard she believes in love again…oh, and she’s also become completely insufferable. Gabrielle announces to the cast that she’s not straight and doesn’t know exactly how she identifies, Shannen calls her gay, and Tori wonders out loud if Brian is gay too, and that’s why he’s not into their sex scene. Ah, Tor…so sad, so delusional. Brian, inspired by Gabrielle’s announcement and desperate for attention, takes the moment to introduce Zach to the rest of the cast as his son. Shannen eats a sandwich, and through her lackluster attitude and subtle bitchiness, she has quickly become my favorite character.

Tori and Brian finally get through their “sex” scene, which is literally just a soft makeout where we don’t even get any tongue, and Tori is very pleased when Brian pops an accidental stiffy. Jason calls cut for the day and announces they’ve finally shot one scene, only 46 remain before the pilot is done! As they leave for the day to their apparent live-in trailers, Gabrielle meets the detective who’s investigating the case they allegedly solved, and we watch him pick up a water bottle that had been tossed in the recycling by none other than….Brian’s stalker-turned-son Zach!

The episode ends with Shannen kidnapping Tori’s chicken in her brand new car, and I’m left wondering how they’re going to wrap this whole thing up in only one more episode. Next week is the season finale, so I’m going to re-up my Xanax prescription and snuggle in for what is sure to be an episode even more confusing than the pilot.