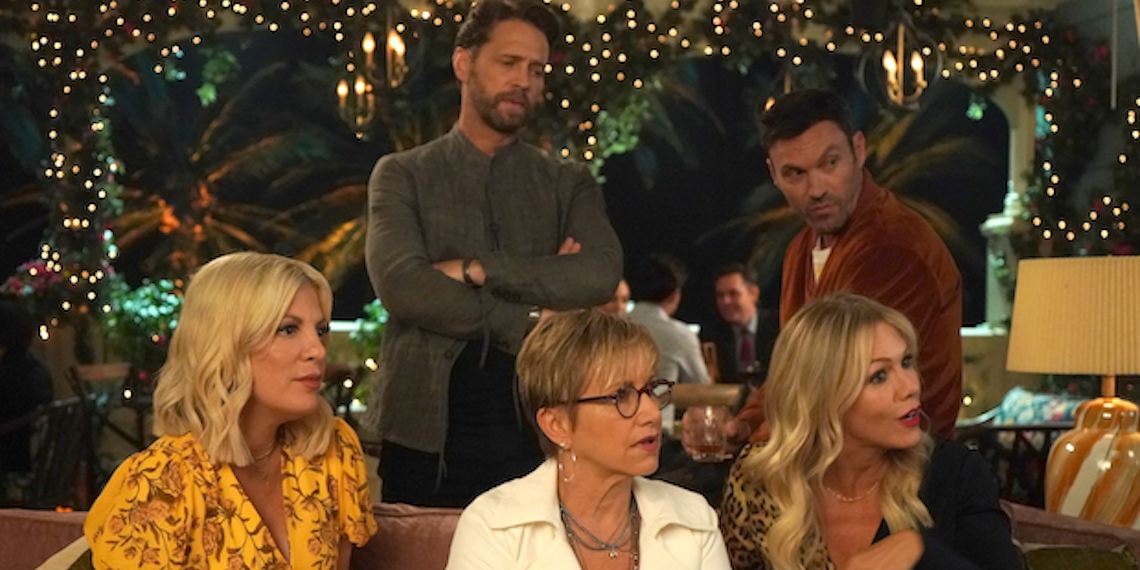 The new BH90210 is really taking off, and as a dramatic bitch who loves complicated story lines and plastic surgery, I’m living for it. Episode four begins with yet another dream sequence—that’s four episodes and four dream sequences, so I guess that’s just like… going to be a thing. This is a good one, though, with Gabby in her pink prom dress and terrible hair yelling “You said you liked me!” while wielding a chainsaw on the counter of The Peach Pit. I was really connecting to her sentiment, but unfortunately her alarm goes off before she can do any damage, which is too bad because Andrea finally getting her revenge could be a very watchable plot point.

Later that morning, a flustered Gabby and Emily Valentine, who’s playing a fake version of herself in this reboot but will forever be Emily Valentine to the world, are out for daytime drinks discussing Gabby’s newfound sexual fluidity. Gabby awkwardly knocks over her martini while trying to be sexy, and then Emily is all like, “Oh no! did you think this was a date!? Sorry I messaged you on a dating app and asked you to drinks and am constantly flirting with you at work, I guess this one’s on me!” Like yeah, Emily Valentine, you heartless monster, of course she thought it was a date! Why do you always have to f*cking ruin everything!?

Meanwhile, Brian Austin Green’s wife, Lala, loses it when her no-autotune song leaks and is convinced it was Brian’s freaky little new assistant, Zack. While Brian insists it couldn’t possibly have been the teenager whom he’s known for all of 10 days, the little twerp pops in like a snitch and says he saw Lala’s stylist of five years lurking around in her private at-home studio. Lala, who’s supposed to be a Beyoncé-esque superstar, ends the conversation with an eye-roll and hires a private investigator behind his back. We never really found out how Jay-Z got caught, did we?

Ian’s bizarre feud with the new head writer comes to a head when it turns out she like…totally sucks at writing. The whole cast sits in silence after the table read and has no problem telling the overzealous, inexperienced writer that she doesn’t know what she’s talking about. She insists that she doesn’t even need this incredibly high-paying gig (she most definitely needs it) while refusing to write down any of their ideas or complaints.

With their first shoot day the next morning, the cast, and now-top-Fox-executive Emily Valentine, head to what is quickly becoming The Peach Pit of the reboot, a Soho House-esque private club, to guzzle $18 cocktails and write an entire new pilot for the next morning. Ian, who is crushing on the terrible writer, insists she find a private place to go and be with her thoughts before attempting her own rewrite, and inexplicably gives her the keys to his car. He starts secretly filming the cast with his phone as they argue and make up over and over, and sends the writer the videos. Suddenly she completely understands every single thing about the cast and writes a brand new, 60-page pilot in the matter of a few hours from the passenger seat of Ian’s parked car. Naturally, the entire cast gushes over it and praises the inexplicably-angry writer’s new work.

Jennie’s daughter Kyler, to whom Jennie promised a role in the reboot, is forced to fake audition for the role so as not to be too obvious with overwhelming nepotism: “I get nepotism, I’ve been dealing with it for 30 years!” Tori jokes about herself. LOL Tor, if you can’t laugh at yourself who can you laugh at? I guess all those hard-working actors who didn’t stand a chance because your Dad was rich! As it turns out, Kyler totally sucks at acting, and the poor actress they brought in so it seemed real turns out to be a young Meryl Streep, so Jennie and Tori decide Kyler will play Tori’s daughter instead of Jennie’s. Kyler is thrilled about working closer with “Aunt Tori,” until she gets the script and realizes she’s essentially a featured extra and whines about it for the rest of the episode, all without looking up from texting. My advice: start a Bling Ring situation for the excitement and continue spending your mother’s money.

Kyler then reveals that she slashed her mother’s tires in an effort to keep her new bodyguard Wyatt around, which is like, really sweet I think. Oh yeah—in case you forgot, they’re all being stalked and harassed by someone who randomly pops in with little bloody dolls and chilling camera lens zooms.

Jennie tells Wyatt that Kyler was to blame for the tire incident, not the psycho killer, and they almost share a romantic parking lot kiss before Wyatt explains he needs to prioritize his career as a bodyguard over his romantic connections. If I had dollar for every time a guy used that excuse with me I would have enough money to pay off one of my credit cards!

Shannen finally makes her way to LA in her sherpa-inspired garb, then immediately leaves again because she doesn’t like the energy in the room. She goes to meditate cross-legged in the lobby while mulling over her decision to return. After Emily Valentine is done guiding Gabby into dating women (while still being married to the sweetest old man alive) she announces that Shannen is making double what everyone else is making. With almost no conversation at all, they all have a come-to-Jesus moment, and Shannen agrees to do the show for double the money. All is fair in love and desperation to be relevant again!

Lala calls hot-ass-daddy Brian and tells him that the private investigator discovered that yerppp, turns out it was her faithful stylist that leaked her song…but also that his new assistant Zack is a psycho who’s been stalking him for years. Win/lose for Lala! Brian is appalled that the stranger he barely knows, yet trusts to be with his children alone, would lie to him! After getting yelled at for being the psychotic stalker that keeps following them all around, Zack confesses he’s not a stalker, he’s Brian’s—wait for it—son. Before we get to delve into that mess, we cut to Gabby and Emily Valentine making out over freshly printed scripts, and Tori bashfully telling Jennie she still has feelings for Brian, who she dated fully 30 years ago. Like, get a grip bitch, we all want to f*ck him…he’s literally married to Megan Fox. None of us stand a chance.

The next day, they joyously arrive to the set, and they’re greeted by a red spray-painted door reading “STOP ACTING LIKE I’M NOT EVEN HERE.” The creepy, Halloween-themed door opens while the cast waits, smiling and ready for this crazy reboot to kick off. But instead of revealing a new Peach Pit or West Beverly High, literal flames pour out of the door and the credits roll. Looks like assistant Zack wasn’t the psycho after all!

I’m excited to see what next week has to bring, whether it’s more cast members sh*tting on the sanctity of marriage or a psycho serial killer trying to wear Tori Spelling’s skin!