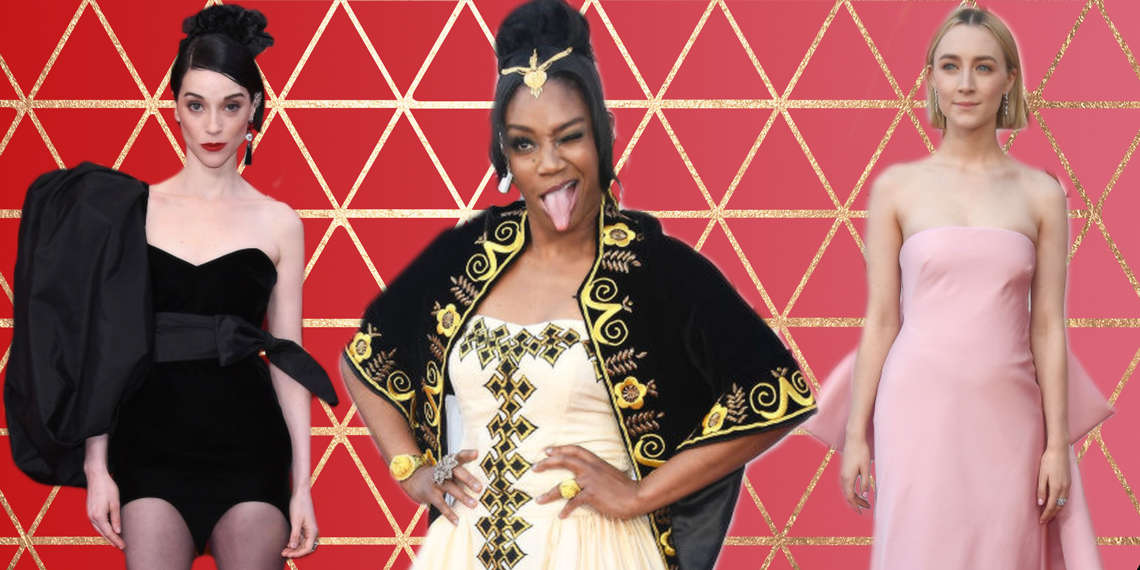 The Best And Worst Dressed Celebrities At The 2018 Oscars

Listen, I’m pretty disappointed with this year’s Oscars red carpet. Normally, the E! preshow is decent enough to make up for having to watch three hours of producers and directors get passive-aggressively rushed off stage with that annoying music while they desperately try to thank their moms, but this year was a shit show of epic proportions. If you’re out of the loop, you basically just need to know that nobody wanted to stop to talk to Ryan Seacrest because of the sexual assault allegations against him. At the culmination of an award show season that’s been all about holding shitty dudes accountable, I don’t really understand why E! couldn’t just like… let a woman do it. We all know chicks on their payroll don’t make as much as men so they probably could have saved a few dollars, but hey what do I know? I’m just here to talk shit about celebrity style, so let’s get to that. Here’s the best and worst dressed 2018 Oscars edition.

Tiffany Haddish is hands down the best dressed at the Oscars this year because she’s openly like, “fuck it, this dress was expensive and I’m going to Febreeze it and wear it again.” This is the positive Hollywood influence I’m looking for. Except, when I do it, it’s less like a $4,000 Alexander McQueen gown and more like, a $60 pleather Topshop miniskirt. Whatever, the sentiment still stands. I’m also very down with Tiffany’s UGG slippers. I’m so glad we finally have a celebrity who’s actually relatable, and not just pretending to love pizza and fall down a lot because her publicist told her it could be a good gag. Her red carpet look was not the same dress, but it was equally memorable, and I hope served as her audition for Black Panther 2 because she looks regal. I’d give her the role, I’m just saying.

I’m usually not one for random off-the-shoulder embellishments, but Margot Robbie’s white Chanel gown is actually changing my mind. I’m pretty sure she’d still look perfect in this even if she styled it with a fried, frizzy Tonya Harding ponytail and a Marlboro Light. Every wedding gown on the next season of Say Yes to the Dress will be a knock-off of this, I’m calling it now.

Lupita absolutely stunned in this Versace gown that would probably look a little bit like most of the dresses worn to a Staten Island prom in the 1980s if she wasn’t like, the most flawless person in Hollywood right now. The asymmetrical neckline, the slit—it all works.

Taraji P. Henson is one of the few celebrities left in this godforsaken world who still knows how to look classy with a super high leg slit and a shit ton of cleavage. Oscar looks can get boring easily because it’s kind of the stuffiest award show, but Taraji’s Vera Wang look is perfect, and it looked even better paired with the shade she threw at Ryan Seacrest.

I really hope Jennifer Garner’s former nanny who fucked Ben Affleck is crying into a tub of ice cream right now. I mean, I’m doing it, and I didn’t even break up a marriage.

I kind of feel like I’ve seen Salma Hayek’s dress before, but that might just be due to the fact that I spent my last hangover watching JonBenet Ramsey documentaries for seven hours, and this blinged-out Gucci gown looks like it previously belonged to a child pageant star. I may or may not be temporarily blind now.

Emma Stone decided to completely ignore the “it’s the Oscars, wear a gown” memo, I guess because she won last year so she doesn’t need to try this time around. It’s kind of like when you get a boyfriend and you start going out to the bar in flats because you “don’t have anyone to impress.” How come when I showed up to work in this exact outfit it was “you can’t come to work in your pajamas” and when Emma Stone did it, it was fashion?

Saoirse usually totally slays, but this Calvin Klein gown is giving me a dull headache. It’s what I would imagine Regina George would have worn to the spring fling if she had a regular mom who was like, “aw honey, don’t try Sears, let’s have my tailor let this out so it fits you better.”

Listen, mad respect to Andra Day for saying fuck it and literally just laying down on the red carpet, but this Zac Posen gown is bad news. Every award show red carpet has at least one woman who is the butt of the guaranteed “this is made out of a fugly tablecloth from my grandma’s house” joke (we will have two), and not only does this look like an elderly woman’s tapestry, it also looks like its original purpose was for a Renaissance Fair.

It physically pains me to put Zendaya on any kind of worst dressed list, but this flappy brown chiffon Giambattista Valli gown does not make her exempt from a good shit-talking. This list isn’t personal, it’s just that I hate your fashion choices and am now questioning your judgment and taste. Sure, I might just be biased on this dress because I spent 2005 wearing a lot of brown gauchos and Limited Too graphic tees with slogans like, “I’m adorable, DEAL WITH IT,” but chocolate brown is a color that will never work unless you are a hot UPS delivery guy who’s very receptive to the Bend and Snap.

I just have two quick questions for Kelly Ripa. The first is, what are you on that made you think wearing a massive pink and neon green bow on your butt would be a good idea? This dress is the definition of a mullet. The second question is, can you hook me up with your plug?

Whoopi’s dress was made for her by Project Runway winner Christian Siriano—apparently this week’s challenge was to make a dress out of your grandmother’s shower curtains.

Adam Rippon is 28, but he looks like a high schooler who found his parents’ stash of bondage gear. He definitely still gets carded at the leather bar. This is why they need to stop making 50 Shades movies.

Can’t get enough of our shit-talking? Read the full 2018 Oscars recap. We promise it’s wayyyy more entertaining (and shorter) than the actual show.