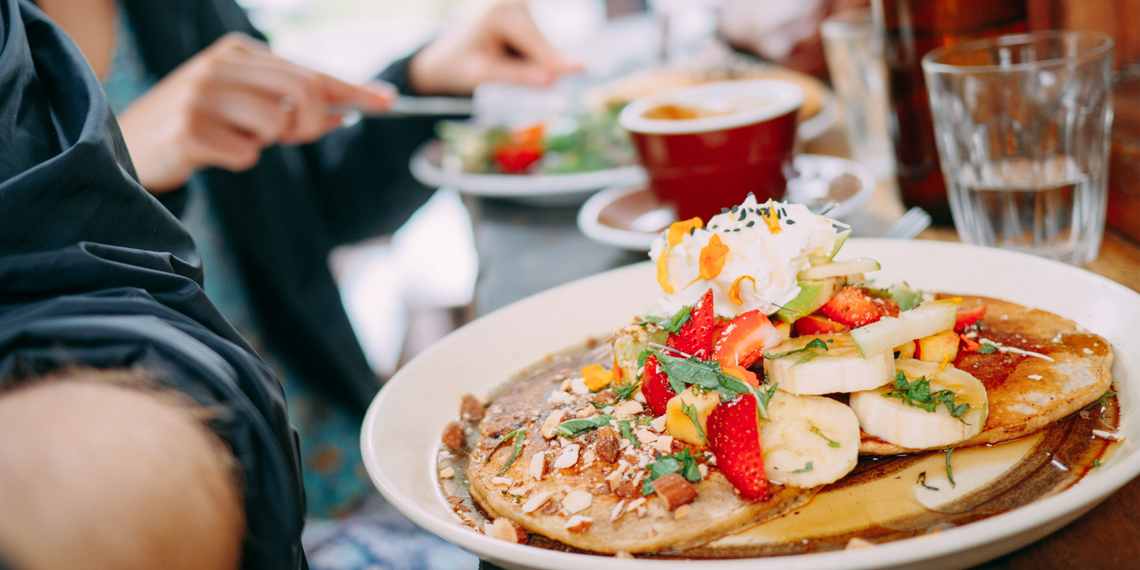 Brunch is obviously a worthwhile occasion any time of year—if just for the mimosas. But there’s something about digging into a towering stack of pancakes on an outdoor patio that makes us smile with satisfaction—vitamin D and all that. In fact, having an alfresco brunch attitude in the summer is the way to go for three reasons: you maximize your chance of seeing a Corgi waddle down the sidewalk, ensure sun exposure so you can get your glow on, and get tons of natural light for your Instagram food porn. (We all know how important that last one is.) Our recommendation? Make like the Europeans and relinquish yourself to the sun at our pick of the best outdoor brunches in NYC. Cheers to an endless summer…

Sometimes you need to get the F out of dodge but don’t have any funds to travel. Head to Williamsburg to the Llama Inn for some urban oasis vibes courtesy of its rooftop patio that’s overflowing with plants, decorated with Peruvian décor, and just generally gorgeous. It doesn’t hurt that the food is inventive and delicious. Don’t sleep on the spicy pork shoulder sandwich; it’s one of our favorites. 50 Withers Street, Williamsburg.

Into soccer on the big screen? Into large outdoor patios with picnic tables and umbrellas and pitchers of craft beer? Into being within walking distance of Central Park and Columbia? Yes, yes, yes! Great, head to Harlem Tavern, a restaurant and beer garden at 116 and Frederick Douglass Boulevard that will make you wonder why you don’t go uptown more often. During the live jazz brunch on the weekend, all brunch entrees include a free a drink, so you can buy three more and not feel guilty about spending money. 2153 Frederick Douglass Blvd, Harlem.

So someone told you you’re In need of some Omega-3s, and now you’re freaking out. Head to brunch at the Mermaid Inn on the Upper West Side for a seafood-filled occasion that will drown out your worries in no time. This neighborhood staple just launched a new brunch menu that includes one of the best smoked fish boards we’ve come across in the city, which makes heading up there worth having to weave in and out of families with strollers and octogenarians with grocery carts. Sit outside on the sidewalk patio right on bustling Amsterdam Avenue and see how many oysters you can slurp down before the waitstaff starts to look at you funny. It’s fun, we promise. 570 Amsterdam Ave., Upper West Side.

You can’t talk about New York and not mention this iconic West Village institution with walls that open up to allow fresh air from the Hudson (it’s a stone’s throw away) to filter through the restaurant on warm summer days. You’re basically eating elevated Italian food in a garage, but it will be the best garage brunch you’ve ever had in your life—guaranteed. Start with a breakfast pizza, and don’t you dare skip dessert. 775 Washington St., West Village.

Head to Gilligan’s in the summer to get shipwrecked on their delish frozen watermelon margaritas. This seasonal outdoor pop-up at the SoHo Grand Hotel will have you feeling so tiki chic, you’ll forget we all actually are all stranded on a tiny island we can’t afford to leave, just like the folks in this spot’s namesake TV show. Our favorite part of this brunch locale? Getting dusted by misting fans while stuffing our face with lobster rolls. 310 W Broadway, SoHo.

Pretend you’ve been whisked away into a French Riviera daydream while brunching on board Grand Banks. You’ll be surrounded by finance bros and attractive wannabe finance wives within the confines of a thoughtfully decorated sailboat—and to us, there’s nothing better. Sip on a heavy pour of rosé and shoot some of the freshest oysters in the city with an impeccable view and aspirations of one day getting to brunch without 50 random strangers on your schooner. Hudson River Park Pier 25, Tribeca.

Magic Hour is this cheeky rooftop at the Moxy Hotel that is guaranteed to make you oddly uncomfortable and incredibly intrigued with its urban amusement park theme and a provocative putt-putt course cleverly named Foreplay. They recently launched brunch (look out for our review in July) with over-the-top versions of classic brunch dishes like a stack of 20 pancakes, Jenga-style stacked French toast, and a 200 oz. spritz—FYI, that’s gigantic. So whether you want to drink away your summertime sadness alone under the Empire State building or bring your lame friends from your hometown to an unforgettable rooftop brunch, we suggest Magic Hour. Oh and if you get too tipsy, you can literally order a mini hotel room labeled “crashpad” on the bar menu. 485 7th Ave 18th floor, Times Square.

Live your best garden party life with your ladies at Gallow Green’s brunch. You’ll feel as if you’ve been dropped into a theatre production as you’re escorted up a silent elevator to a dark train station and finally emerge into a lush, secret garden-esque rooftop. Best part? This brunch comes with unlimited coffee, cocktails, and farm-to-table food in an elevated, non-germy buffet way. You’ll enjoy carbs on carbs and Southern fried chicken all with 360-degree views of the city and the Hudson river. Feeling posh under the sun and avoiding the summer stench of the NYC streets, the joy rooftops bring us is truly unbelievable. 542 W 27th St., Chelsea.