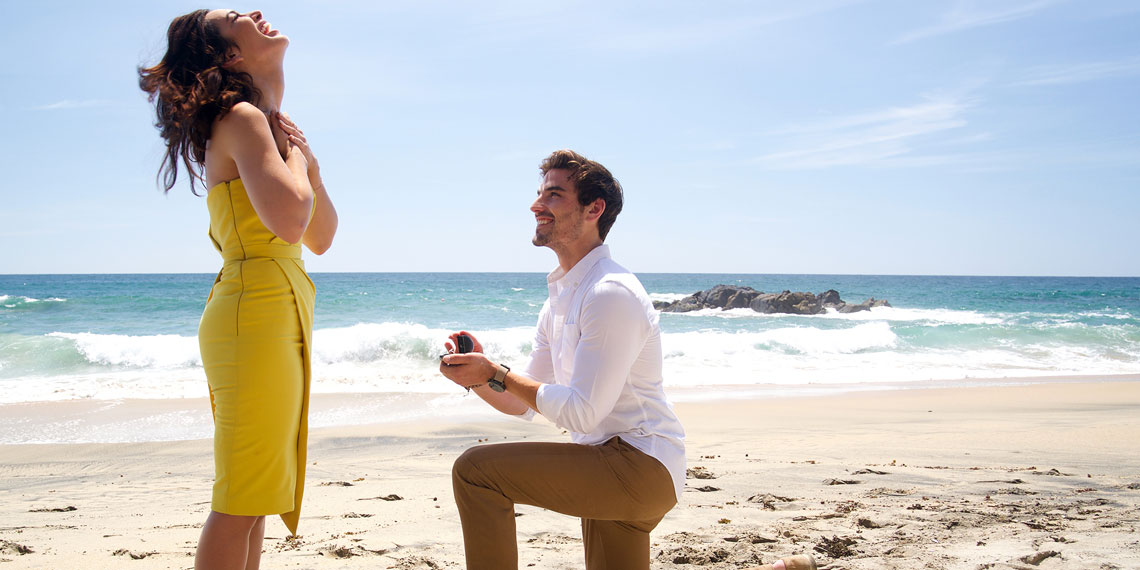 I wanted to extend a warm, fuzzy, heartfelt cyber hug to ABC, the third person in my marriage. Thanks to you, I subjected myself to three hours of lonely singles hunting for love on a Mexican beach while navigating crabs and food poisoning. Sounds like spring break!

We open on Angela flipping out over Eric going on a date with Cassandra, which, to be fair, looks like it’s going to be a lot of Eric licking his lips and not a lot of action. The highlight of this whole exchange is Angela insisting they had a solid and stable relationship based on about 10 days, which is like me saying I have a solid, steady understanding of IT after the computer guy asks if I turned my computer off and then back on again. The beach is buzzing with the news of Angela crying and Eric being a d*ck. Meanwhile, Cassandra and Eric have become queen and king of Mexico during some kind of parade. Will there be a blood sacrifice? Stay tuned.

Somewhere, during all of this (my money is on when Tia starting telling Colton they were the strongest, bravest, most #blessed couple on the beach), Colton decides that he’s had enough and needs to concentrate on becoming the virgin Bachelor  find himself outside of Paradise—without Little Miss Weiner.

After a chat with the boys, Colton heads to the beach to find Tia and stomp on her heart.

Colton sadly lisps his way through an explanation to Tia about how he’s tried, he isn’t that into her, she deserves better, and every other excuse I’ve personally heard while being dumped. He even likens the whole struggle to football, playing football, watching football, loving football, etc.

Colton: I can’t sit around on a beach anymore
Tia: But can you like say you TRIED
Colton: Totes
Tia: Idk what to say
Colton: Catch me on ABC Monday nights at 8pm

They both pack their bags through tears. Tia, honey, girl—you bullied him into being your boyf like I bullied my parents into letting us get a puppy. You’re no Ashley I. You’ve known him for six months and dated him for about 10 days. You’re gonna pull through.

The breakup rocks the Bachelor in Paradise world and now everyone is crying.

Jordan: Bro they just like left
John: I was asleep
Jordan: Tia and Colton are gone
John: Can they do that?
Producers:  STFU JOHN AND GO FIND SOMETHING TO DRY HUMP

Jenna is taking Colton and Tia’s breakup especially hard and throws herself face down princess style into an oversized pillow. Jordan comes over to suffocate comfort her with his love. “I’m not a Colton and you’re not a Tia.” Jazz snaps for Jordan, ever the beachy gentleman.

The Angela, Cassandra, And Eric Show

Cass and Eric return from their coronation at a Mexican high school, and Angela is immediately trying to stare through Eric. They head to the beach for a chat, in which Eric explains that after a peaceful nap he woke to discover that omg, I like you but don’t LIKE LIKE you anymore. This, by Eric’s logic, makes it totes cool to explore other options i.e. Cassandra.

Angela: Are you all in
Eric: I was all in but like you’re not all in and I wanted us to be all in together
Angela: That’s your opinion
Eric: I wanna do some splorin’
Angela: K.

It’s around this precise moment that Angela decides to set fire to all of Paradise by pulling Cassandra aside and laying out what a skeeze Eric is. Cassandra, now shooketh, heads back to confront Eric. Eric tells Cassandra that Angela “maybe took it outta context” that they were exclusive. Eric becomes a champion for f*ckboys across our great nation, which is especially clear when he PUTS HIS HAND ON CASSANDRA’S LEG WHILE HE’S EXPLAINING THAT SHE DOESN’T NEED TO WORRY ABOUT ALL THIS OH MY GOD MAKE IT STOP.

An Armenian And Scallops Walk On To A Beach…

Another day, another chance for someone to drown. We listen to Kevin and Astrid talk about love and also using ice cream as code for boning. Are these couples all boning already? Can someone let me know?

We see Jordan cutting Chris’ baby hairs and not thinking about stabbing him in the throat. Jordan, your restraint is the stuff of legends.

Two new arrivals come traipsing in—it’s Shushanna from Ben Higgins’ season and Christen aka Scallop Fingers from Paradise, The Bachelor, one episode of The Proposal, and probably several other ABC shows.

They quickly break off the weakest in the pack—60:40 Kamil and Venmo John—and drag them away for a double date. Can someone explain to me the appeal of John? Is it that he’s probably loaded after inventing Venmo? Is there anyone he hasn’t kissed left on this beach?

Annaliese says she feels confident (her ability to throw back several margaritas says otherwise) despite going through no less than six dudes already, all of whom have fled in terror in the face of dating her. Same.

Meanwhile, Jorges Tour-hays (a probably unlicensed but super fun boating excursion) is providing all the fun you could possibly have while straddling a banana and getting pulled through the water during an awkward double date. Armenian Shu and Polish Kamil start bonding over Europe and Angela Merkel’s pantsuits, I assume. Kamil also tells Shu that he’s totally in the friend zone with Annaliese, which is probably news to Annaliese who has already started their family album and picked out several kids’ names. After this shocking exchange and subsequent face sucking, it’s kind of unexpected that Kamil goes BACK TO ANNALIESE and tells her he’s v into her and their relationship is special. I’m sorry, what?

Did Shu have bad breath? Did Annaliese threaten Kamil’s life if he left her? OH, wait, there it is—she’s dangling “spending the night” in front of him. Ah, Kamil—you’re a slave to the poontang.

Meanwhile, John again is putting himself out there to date any living thing that walks on to the beach, including Christen. Tune in next week when John tries to go on a candlelit dinner date with a beach crab and hilarity ensues.

Chris comes in screaming HOLA; is me after two drinks. Here come the Bachelor in Paradise poster kids, Jared and Ashley, ready to hand out a date card on the very beach where Ashley was rejected by Jared during every previous BiP season. Saying things were a little complicated for Ashley and Jared is like saying Trump is just a bit too vocal on Twitter.

Of course, the real reason Ashley and Jared are here is to get engaged in front of a bunch of sad singles to solidify the idea that bikinis plus alcohol equals great relationships. We then take a journey in time through Ashley’s snot and tears while Jared tells her he isn’t interested. Emmy nom for the producers who put together this gem of a footage reel, please. Jared gets down on one knee with a Neil Lane ring and Ashley snots herself for maybe the last time. Break out the champagne and—oh, wait—sorry Kevin.

So how long are we giving Ashley and Jared till this goes down in flames? I got till February 2020. Astrid tries to comfort Kevin after they had to “watch them get proposed.” You’re doing great, sweetie.

MVP comment goes to Kevin for stating “you know, I’m a monumental part of her life. Of her dating life. I’m a BIG PART. YOU KNOW.” We get it Kevin. You snatched the v card. You are our champion.

The Bachelor in Paradise gods bestow a Mexican dinner date complete with surprise mariachi band and pool floaties on Astrid and Kevin, who then continue to profess their love. Sweet, guys.

Alright 45 mins left and half my life is gone.

Time for the rose ceremony, where everything’s made up and nothing matters. On the chopping block are Chelsea, Cassandra, Angela, Christen, Shushanna, and Annalies—unless the sex with Kamil was like, okay, and she gets to live another day.

Apparently, Cassandra has forgotten all about Eric’s stupidity and is going to Namaste-away all the bad juju with a lil yoga.

Christen is vying for her rose by showing everyone how ill-fitting her jumpsuit is and how great of a dancer she can be when margaritas are around. Fugly slut John is whoring his rose out to whoever tells him he’s the most awesome. Remember that time Chelsea saved him? Me either.

Annaliese continues to dangle sex in front of Kamil and Shu is refusing to call her anything except “The blonde girl.” Shu is all of us.

Suddenly, Chris Harrison drops a bomb. Not a real one, unfortunately. Jordan, of Bibi and Jordan on Winter Games fame, is here to give out a rose and, like, find love, too. Jordan makes it abundantly clear that he is here for business and “not here to f*ck spiders.” New Zealand, I don’t get you, but you’re the gift that keeps on giving.

Chelsea immediately sidles up to Jordan and explains that while she “has a few responsibilities back home” she’s totally open to love. I’m sorry, did you just straight-up call your kid one of your “few responsibilities”? Mother of the year.

When things don’t seem to be playing out with Jordan, Chelsea goes in for the kill and heads straight for Kamil in an effort to seize on the clearly unstable relationship Annaliese thinks they have. American Jordan nearly sh*ts himself from all the drama and isn’t sure which look to use.

Annaliese, shooketh, discusses this backstabbery with Chelsea while Kamil flosses, sadly with Scallops in the background.

Despite her best, b*tchiest efforts, Chelsea loses out on Kamil’s rose to Annaliese. The roses go out as follows:

Chelsea, Angela, and Scallops Christen head back from whence they came… OR SO WE THINK.  Christen starts claiming she’s dizzy and lightheaded while Chelsea has a nervous breakdown in the jungle complete with panic attack. We listen to Chelsea hyperventilate while we simultaneously die of happiness for the fact that this three hours has come to an end. Will Chelsea and Christen pity party their way to a new ABC show? Will Annaliese handcuff herself to Kamil? Will John pick a new victim? Tune in for part two tonight and we’ll all struggle through this together.