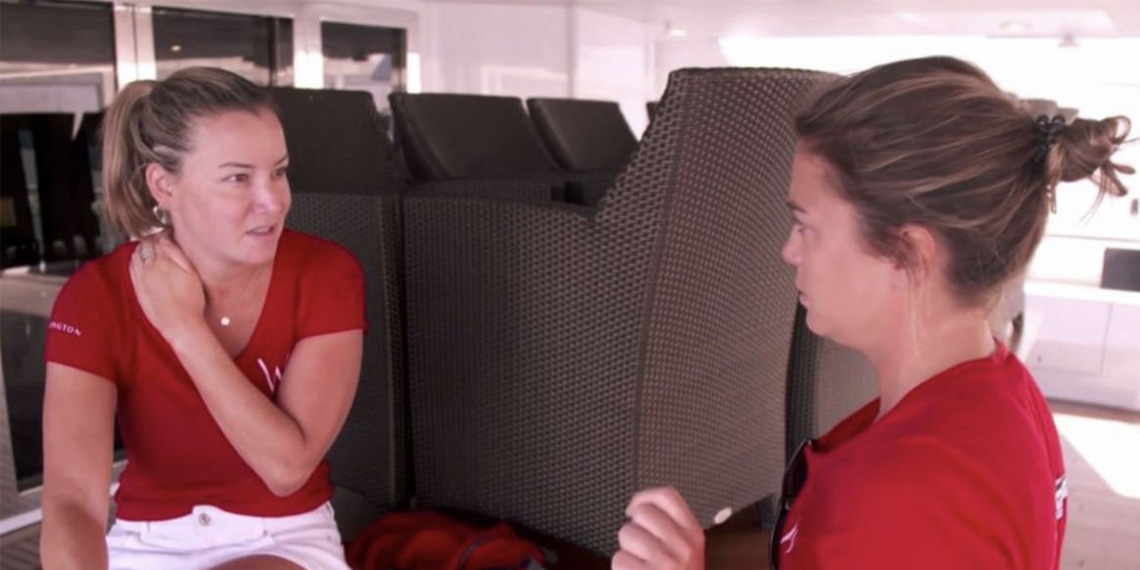 WTF Is Happening On ‘Below Deck Med’?

If you’re a long-time viewer of Below Deck Med, then you’re no stranger to drama going down on a yacht. Over the past five seasons, we’ve seen firings, demotions, blowout fights, and too many crew hookups to count. But in the most recent episodes of season five, some particularly troubling events have transpired, and we need to talk about what the f*ck is happening on this boat.

On last Monday’s episode, we saw chef Kiko get fired after serving the grossest looking nachos I’ve ever seen to the charter guests. We all loved Kiko, but ultimately, he just wasn’t really up to the job. Unfortunately for chief stew Hannah, Kiko was her only true ally on the boat, and in the aftermath of his firing, she experienced a panic attack in the middle of the night. We saw her tell Malia that she needed a Valium, to which Malia responded, “isn’t that a prescription?” Malia also downplayed the attack, calling it a “freak out”, but the show moved right past this, Hannah started feeling better, and it seemed like the worst was over.

But in this week’s episode, the Valium resurfaced in a way that left the viewers with way more questions than answers. After Kiko’s departure, Malia’s boyfriend Tom came in at the last minute as the new chef. Because of this, Malia asked the rest of the crew to change cabins so that couples could be together: her and Tom, and Jess and Rob (not even gonna get into that bizarre relationship). These room switches left Hannah and Bugsy to room together, and neither was too keen on the idea. Hannah and Bugsy are known enemies from a few seasons ago, because Bugsy routinely outperforms Hannah even though she is a second stew and Hannah is Chief Stew. I mean, what’s she supposed to do, Bugsy just has such a knack for table decor!

Hannah and Bugsy discussed the possibility of rooming together, decided it’s a bad idea for them professionally, and Hannah was left to tell Malia. Malia responded by telling Hannah that it is boat protocol for couples to room together, and that it’s perfectly reasonable for everyone to switch rooms so that she can be with her BF.  (It should be said that in the post-episode Watch What Happens Live!, Malia admitted that this is more of an unwritten rule.) Hannah promptly turned off her radio and took a smoke break. After going to Captain Sandy about the disagreement, Malia got her way, and Sandy announced on the radio that Tom and Malia would be rooming together. Not great the captain had to get involved, but it seemed like this drama was over.

Or so we thought! At the end of the episode, an unnamed crewmember sent a photo of Hannah’s Valium pills, a CBD pen, and a lighter to Captain Sandy, with the shady text attached: “I’m sorry, but I have to report this.” It didn’t take a rocket scientist to guess that Malia was the one who reported Hannah, and this has been confirmed through many social media posts.

I like Malia’s arranging skills. So that’s prescribed Valium, CBD (which is legal in Spain), a lighter (not sure what this has to do with anything) and my passport holder… And for anyone who’s interested the prescription is on the other side of the box as shown… #belowdeckmed pic.twitter.com/9ZpMjVUWVu

Hannah has made it clear that she had a valid prescription for the Valium, but apparently that’s not the issue here. I’m no expert on maritime law, but according to Malia’s Instagram post attempting to explain the situation, the issue is that Hannah didn’t inform the captain and/or the charter company about her medication and its potential side-effects. Malia even posted a picture of the charter contract that the whole crew signs, highlighting the rules about medication.

If you want to hate me- hate me, but know the FACTS. Here’s the policy straight from the contract. I never said you CANT have medications – you just have to follow proper procedures that are in place to protect ALL crew members. The Captain of the vessel has the right to know who might be taking what & when! They are operating a vessel at sea with everyone’s lives in their hands! You’ve already heard four crew members working on the same boat come forward about their struggles & need for medication- it is ESSENTIAL that as crew we are responsible in how we go about medicating. It’s a pretty straightforward policy set in place to protect us NOT to exclude anyone. As for illegal drugs- it doesn’t matter if they might be legal in whatever country we are in… we operate under the Flag State the boat is registered to which is zero tolerance. I apologize if I didn’t go about reporting or handling the situation to the best of my ability but it was also a HUGE learning curve for me. Please understand this is my career and I take the rules very seriously. If a crew member has an issue with their contract or the laws put into place to protect them- then they should address that before signing onboard. Also consider the sequence of events you witness on tv is the condensed version so the timeline might seem a bit dramatic! I’m not out to get anyone— I’m here to do my job. To all my crew- I’m happy everyone is sharing their stories and I hope this information helps you understand your contract as crew- you aren’t alone in your struggles which is precisely why we have these policies in place! ❤️⚓️ @bravotv @belowdeckbravo @captainsandrayawn #belowdeckmed #belowdeck #safetyfirst #responsibility

The thing is, I don’t think anyone thinks Malia is lying about maritime law or the rules of yachting. But if Hannah taking Valium was such a grievous breach of protocol, why did Malia wait two full days after Hannah’s panic attack before bringing it up? Especially given their issues in the meantime, it’s hard not to see it as a petty move to get Hannah fired. If Malia truly felt like she needed to say something about Hannah’s medication, she could’ve brought it up directly to Hannah. Obviously Malia doesn’t love Hannah, but it would have been way more considerate to give Hannah the opportunity to handle the situation herself, rather than running to Captain Sandy and blindsiding her.

Additionally, the discussion of Hannah’s prescription anxiety medication as if she’s doing molly on board is really gross. It would literally never occur to me to refer to Valium as “drugs” or “narcotics,” and the use of this terminology by Malia and Sandy feels calculated to minimize Hannah’s mental health struggles and maximize reality TV drama. Anxiety is a serious and legitimate health concern, and regardless of what rules were broken, saying that “Hannah has drugs on board” is a flippant way of addressing the situation.

Judging from the preview for next week’s episode, it looks like Hannah’s firing is imminent, and maybe Captain Sandy had no choice. But the way the situation was handled has been beyond frustrating to watch, and it’s angering that, in 2020, we still can’t deal with mental health in a constructive way. I love Below Deck Med, but I can’t wait for this bullsh*t to be over.