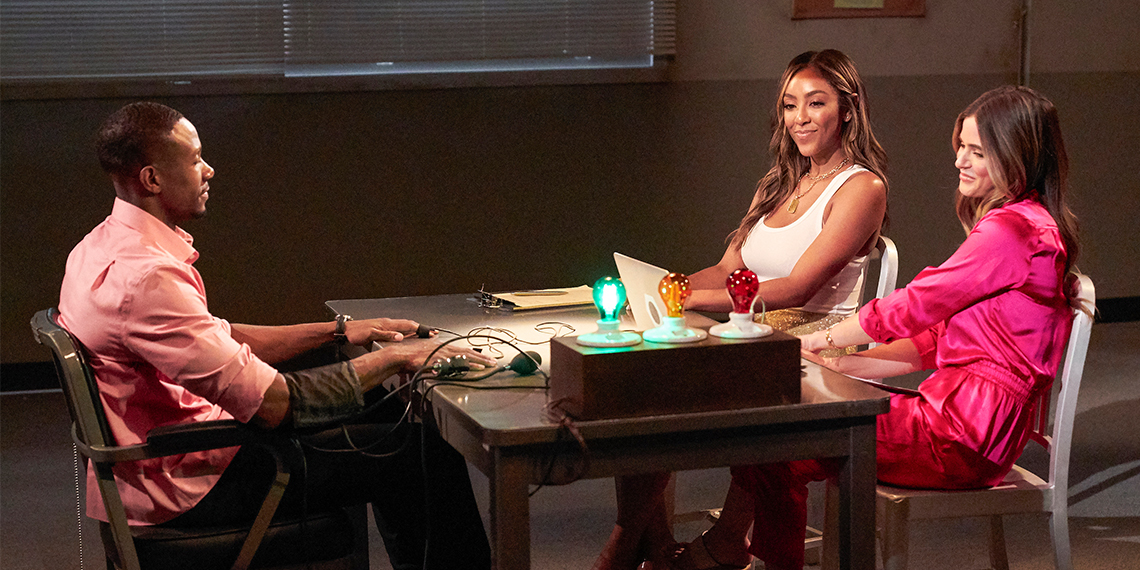 Welcome back, Bachelor fans, to another Tuesday where we get to watch men who have at one point in their lives most definitely measured their penises with a ruler argue about who has more emotional maturity. I’m going to skip all the bullsh*t and just jump right into this week’s recap because, and I say this begrudgingly, this week was actually pretty dramatic. I’ll give you this one, JoJo Fletcher! Just the one!

When we last left off, Bennett and Noah were facing off on the two-on-one date. Bennett had just gifted Noah with the equivalent of a humble pie straight out of The Help and was in the process of explaining to Tayshia how this elaborate insult wrapped in Anthropologie wrapping paper was actually a sign of his emotional maturity. *turns up volume*

Look, all I’m going to say is this: If Tayshia sends Noah home I will riot. Then again, I would like for her to send SOMEONE home at this point since that rose ceremony looks more crowded than an American Idol audition auditorium.

BENNETT: I’m not a mean guy, it’s so easy to be misunderstood in this house.
TAYSHIA: So, what’s in the box?
BENNETT: Um

HAHA. Yes, Bennett, I would love to hear you explain how just because you were the mastermind behind this grand gesture of pettiness, it doesn’t actually make you petty. Tayshia asks Bennett if he’s ever questioned her integrity on this show and he says he hasn’t, he just doesn’t trust Tayshia’s judgment when it comes to Noah. Ummm, that’s kind of the same thing, bro!

Throughout this whole conversation I can’t stop staring at Bennett’s shoes. He’s wearing white sneaks with this suit. Is that emotionally mature? Because it sure ain’t age mature. Once you hit 35, the milky white skin of your ankles is officially something I never want to see on my television screen again.

Noah is up next. If Bennett took the offensive route, Noah takes the defensive. He launches into an attack on Bennett’s character, which will probably be the kiss of death for him. She just said she didn’t want her time dominated by sh*t talking and drama. He says that Bennett is condescending and speaks to people like they’re less than him. All valid points, and something I think they all should have foreseen after the 10th time Bennett name-dropped Harvard into casual conversation.

Honestly, send them both home. I do not care about this fight. Send them both home and take me to some footage of Chris Harrison dropping his son off at college. Did he get the right Twin XL sheets at Bed Bath & Beyond? Tell me!!

It’s time for Tayshia to make her choice, and she’s still torn. On the one hand, she’s really falling for Bennett and the bougie aesthetic he’ll bring to her Instagram feed. On the other hand, she did already force Noah to shave his mustache and can that really be for naught?

WHAT. SHE SENDS BENNETT HOME?! I was hoping for that, but still. Wow wow wow. I can’t wait to hear how he spins this at the next alumni Zoom happy hour.

Even though Bennett is sent home, she still won’t give Noah a rose. He’ll have to wait for his dumping at the next rose ceremony just like everyone else. Well, I think she said something like, “I guess I’ll see you later” which is the equivalent of “if you f*ck up this rose ceremony for me, you’ll wish your mustache was the only thing I took from you.” Good luck with that, Noah!

Noah explains to the men that, like my sanity this season, he is hanging on to Tayshia’s good graces by a thread. You can tell the guys are suppressing their disgust with Tayshia’s decision one passive-aggressive sip of their whiskey at a time.

Tayshia tells us that Hometowns are around the corner and that’s why she’s done with all of this drama. Hold up, what? HOMETOWNS ARE AROUND THE CORNER?! She has 30 men left!! Is she massacring 15 of them tonight at the rose ceremony or something? Is this going to turn into The Purge?

Okay, wow. The men are pulling out ALL the stops tonight. They’re lavishing Tayshia with straight-up bribes to up their chances for Hometowns: Riley bakes her a cake, Zac hands her a framed picture, Ben gives her a tour of the back of his throat. It’s really sweet.

Wait, there are only five roses up for grabs?! Damn, I was joking before but this really is turning into The Purge now.

Here’s who goes home: Ed, Damar, and Spencer, which means Noah somehow survived another rose ceremony by the budding hairs on his chinny chin chin. I swear this guy is like a cockroach. I wouldn’t be surprised if at the final rose ceremony he walks out from stage left to propose and Tayshia is like “damn, I knew I meant to send him home before this.”

Tayshia chooses Ben for the first one-on-one date of the week, and in theory I have nothing against this choice. He does touch his hair far too much for my liking, but fine.

Okay, I would be pissed if JoJo was hosting my date. Chris Harrison is like the botoxed drunk uncle at Christmas who eviscerates your outfit and your life choices in between bottles of wine, but ultimately means well. JoJo is the competition. You don’t see Chris Harrison running around in hot little crop tops with perfectly curled hair. What’s your angle, JoJo??

JoJo sends them on an elaborate scavenger hunt that’s not so elaborate because they’re confined to the square footage of the La Quinta Inn. There are a confusing amount of piñatas that hold a singular clue and that concludes the date “activity.” I think Ed might have searched harder to find Tayshia’s rooms than the production team did in making this date.

TAYSHIA: You seem too perfect
BEN:

During the cocktail portion of the evening, Ben elaborates more on his past. He gives a harrowing account of failed suicide attempts in the past few years and his emotional struggles after leaving the military. I’m glad he’s still here and is willing to tell his story on national television. That takes guts, and I know the audience back home appreciated his candidness. Tayshia seems to agree and gives Ben the date rose.

Sidenote: I think it’s interesting that ABC keeps giving us these “real” moments from the contestants. ABC came under fire in recent years for being tone-deaf and glossing over traumatic backstories in favor of meaningless drama that upped ratings. I was actually one of those critics, but now I’m not sure I like this new format.

For a while now I’ve wanted to see more realness in my reality TV: more diverse cast members, more bodies that aren’t size two, more people with Instagram followings below 1k. And ABC has made great steps, don’t get me wrong, but the heaviness of these contestants’ stories feels strange and a little unsettling when juxtaposed with dates that involve the men fake orgasming over a microphone. I think for me it takes away from the authenticity of these guys and their stories. I know you can be both silly and have had traumatic things happen to you in your life, people are multifaceted after all, but the way ABC flip-flops between the two makes their pain seem gimmicky when I know it’s not. If ABC is going to shake the show’s foundation by bringing in more diverse contestants, then they need to change up the formatting too to match this new tone. IDK, maybe this is just a transition season and Matt James’ season will feel more ironed out, but right now it’s not working for me.

This week, the guys are going to participate in a fun game of truth or dare, but minus the dare and with a lie detector test where their answers may or may not be presented in a court of law. See? Fun!!

Okay, they definitely got this lie detector at the clown store. Like, someone is for sure behind a curtain pressing red or green. Maybe not even a person, just ABC’s least favorite intern. Or a monkey throwing feces at a color. Who can say!!

We learn some valuable intel from the Costco brand lie detector test. Things like Noah really misses his mustache and Brendan doesn’t want to be within 10 feet of Tayshia’s family and—this is just so casual—Riley’s name isn’t actually his name! I’m loving how shocked and upset Tayshia looks over what is obviously a fake lie detector test. Anyone who has listened to, like, one episode of any true crime podcast can tell you that lie detectors mean nothing. Especially not ones that ABC bought at the mall.

Dear god, what is Tayshia wearing? Whatever it is, I think they sell it as a duvet cover at Anthropologie.

If there’s one thing this fake lie detector test has done, it’s forced the men into being honest about their pasts with Tayshia. Ladies, take note. This is the dating version of Scared Straight. All of the men seem to be opening up about their past relationships. Zac talks about his promiscuous days at the Bowl-A-Rama, Riley admits that he changed his name because of its ties to some painful family history, and Noah gets to the bottom of his facial hair issues. Yeah, that seems like an even playing field for sure.

Like the ulcer I’ve been living with since the start of this pandemic, who should pop up when you least expect it but Bennett!! He’s like “wow… that dress” and I can already tell he’s regretting coming here.

Bennett tells Tayshia he loves her and it’s like, ooooh, buddy, this was a bad idea. Whichever producer convinced you to do this is a sadist. I love it. And on that note, I’m outtie! We’ll have to wait until next week to see if Bennett can con his way back into Tayshia’s heart the same way his parents conned his spot onto Harvard’s “rowing team.” Until then!

If you’re someone who gets emotionally invested in the journey of The Bachelorette, you may also be sensitive to all the #hairbreak moments happening this season. We get it, it’s stressful watching the lead get more split ends each week. But it’s not as painful as your own hair suffering from heat damage, stress, and other causes of #hairbreak. Pantene’s Daily Moisture, Repair & Protect, and Sheer Volume Collections will bring softness, hydration, body, strength, and overall health to your hair. So even though you can’t keep Tayshia from giving the Final Rose to the wrong guy, you can stop #hairbreak. Click here to get the Pantene core collection and prevent up to 90% of future damage.