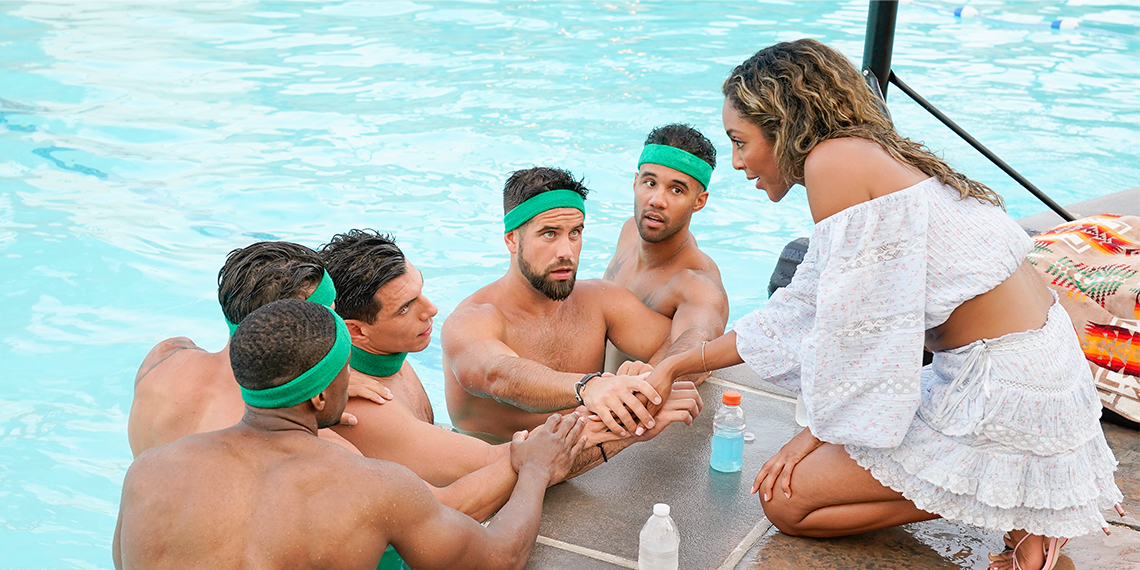 Hello, friends! And welcome to the first recap of Tayshia’s season of The Bachelorette. We’ve ditched Clare and now we finally have a lead who’s willing to lead on 25 men for our entertainment and their humiliation. You love to see it. You may notice I’m not your regularly scheduled recapper, but Ryanne has a rich and busy personal life with things to do and people to see, and I have a full wine glass and a blank Google doc. But don’t worry! We have but one mind when it comes to The Bachelor franchise. Well, except for her opinion about Clare which I thought was absolute, well-articulated trash. It’s okay to disagree, I still love you, Ry! Anyway, shall we dive right in?

We begin with the men continuing to be sore losers while they wait for “the new girl” to show up. Blake looks like he’s wondering if he can get all $5.95 back for the Alzheimer’s book he bought.

Tayshia walks in with some fresh new highlights and the guys seem excited that she’s the new Bachelorette. They don’t immediately jump up and ask to steal her for a sec and she doesn’t immediately bite their heads off for no reason, so I’m already feeling like this is an improvement. Tayshia gives a breathy speech, talking about how she just wants to have a “bomb-ass summer.” Tayshia! This is not Paradise, you’re here to find love. Also, I hope that by “bomb-ass summer” you mean enjoying a generic brand popsicle on a partially deflated unicorn float, because otherwise I thinkkkkkk you’re going to be a bit disappointed in the service La Quinta has been providing.

The men finally begin to pull her aside so they can get to know each other. How embarrassing for Tayshia that Riley tells her he has a real job as an attorney after she just used every euphemism she could come up with to tell him that she gets paid to post about tea that makes you sh*t your pants.

Kick the stink💃🏾 I’ve been on the hunt for the perfect deodorant that protects against sweat AND uses scents that I already love. @secretdeodorant with Essential Oils does the job! that’s my secret 😉 #allstrengthnosweat #secretdeopartner

Tayshia also talks to a guy that refers to himself as “the weirdo in the turtleneck” which makes my job easier because he just came up with his nickname for me. Just as they’re starting to chat, Chris Harrison shows up and says, “I know you’re having a great time, but I have to tell you everything is about to change.”

And just like that, I bet the men who were so happy to talk about how amazing Tayshia is 10 minutes ago are now whispering to themselves “that b*tch thinks she’s too good for us.”

The weirdo in the turtleneck runs in to report that there’s a “big-ass limo looking like it’s full of men.” How does a limo look like it’s full of men? Is it waving a flag covered in dicks? There is no way to actually tell that this limo is full of dudes. For all Turtleneck knows, it could be filled with puppies wearing berets.

Okay fine, it was men. The first guy that steps out is Spencer, who walks right into the group of guys and says, “Which one of you scared away Clare?” Wow, shots fired. Blake looks like he wants to throw his Alzheimer’s book at Spencer’s head.

Another guy named Noah brings a stethoscope and makes Tayshia listen to his heart. “It’s beating!!” Yes, Tayshia if it wasn’t beating this would be Weekend at Bernie’s, not The Bachelorette. I’m actually wondering where this guy got the stethoscope. That mustache makes me think he’s not really a doctor, so did he rip it off the producer who did his COVID test or steal it from his niece’s doctor kit before he left home?

After meeting all the new guys, Tayshia comes back into the house and Spencer immediately steals her away. The guys look like they are ready for their second mutiny in as many weeks.

Kenny, the boy band manager, pulls her aside to chat and tells her that he books bands at a music venue. Ohhhhh okay. So the producers were just trying to humiliate him with that job title then. That tracks.

The guy in sneakers tells Tayshia, “You had me at bomb-ass summer.” Have you ever heard anything so romantic in your whole life?! I think he stole that line from the first draft of Jerry Maguire. They were thisssss close to making it that instead of “You had me at hello.”

I can’t stop staring at Tayshia’s teeth. They are SO white. I wonder if she got them as a part of her job in “the lifestyle space.”

The night is coming to a close and the producers Tayshia decides to give her first impression rose to Spencer. Tayshia then tells the men that she knows the love of her life is in the room, and instead of having a rose ceremony she would like to “continue all their journeys.”

My dog and I looking at Chris Harrison when she says this:

And CHRIS SAYS NOTHING. The inmates are officially running the asylum.

Interview With Clare And Dale

Friends, if you thought you were going to get through tonight without hearing about the low standards Clare has in a mate, you were dead wrong.

Clare sits down and flashes that giant CZ ring at us (what? You thought it was real? Like Neil Lane is just lying in a bathtub of diamonds to FedEx at Clare’s every whim?). Chris tells us that Clare’s engagement is “all everyone is talking about” during the most dramatic election of all time.

Chris says “we’re going to get answers tonight.” Chris! You are not an investigative journalist and this is not Spotlight. Stop acting like you’re not going to just lob them a softball question with absolutely no follow-up or even a quick Google search that I’m sure would expose their lies. It’s fine. We all know you sold your soul to Mike Fleiss and we’ve accepted it. No need to pretend any longer.

We have to listen to Clare continue to tell us that she never had a man show up.

She says that Dale has continued to show up for her every single day since they got engaged. Of course he has, Clare! It’s only been 60 days! I once showed up for my coffee cart guy 60 days in a row. It’s not that hard. But then you know what happened? They opened up a Starbucks and I ditched him. For your sake I pray they don’t open up a Starbucks near Dale!

Clare and Dale swear they did not talk before the show (sure, Jan) and then she says that she knows her dad would be proud of this relationship. Oh, RIGHT. Where’s that DVD he left you, Clare Bear?! I would bet all my leftover Halloween candy on the fact that The Bachelorette is not above exploiting a dead man’s last words. You heard it here first—we WILL see this tape before the season ends.

Before we leave this all-too-awkward interview, Clare just has to tell Chris that babies are next! I think we can all assume that Clare takes her “birth control” out of a Tic Tac box every single night, no?

can we please save dale

Tayshia actually shows up to her group date, which is already an immediate improvement over Clare’s group dates. She tells the men to strip because they are going to be playing a fun little game of water basketball.

What I imagined Kenny taking off his shirt would look like:

Tayshia makes the men get into Speedos and somewhere at home Yosef is composing a note to the network where he calls Tayshia a tramp and an unfit mother. I will say, there’s something about the milky white upper thigh of a grown man that I find very unsettling. I’m not quite sure why we need to keep seeing them, but if that’s what does it for these women, then who am I to judge?

At some point during this sad display of athletic prowess Spencer takes an elbow to the mouth. Tayshia goes over to take a look and exclaims, “that’s a lot of blood!” about an injury that produced less blood than a pimple I popped last week. Maskne is real, people.

Back at the house, Jason is a mess. When the very thoughtful anesthesiologist asks him how he’s doing, he tells him he’s hanging on by a piece of floss. Wow. Profound. That’s going right into tonight’s diary entry.

On the night portion of the group date the men sit around a giant trophy, and I feel sad for whatever low-level producer had to risk catching COVID to go to the Dollar General and pick that up for it to go immediately in the trash in 30 minutes.

Spencer takes Tayshia aside and shows her his lip again, as if it’s a serious injury. And this right here, friends, is why women are the ones who have to give birth.

Jason decides he has to leave because he still has feelings for Clare. He goes to Tayshia’s door and tells her that she deserves someone amazing but he’s gotta skedaddle. Man, for someone who just two weeks ago said his exes would describe him as cruel and unfeeling, he really comes out of this smelling like roses, am I right?

Tayshia picked the weird guy in the turtleneck for her first one-on-one date of the season, and this is when I learned his name was Brendan. Tayshia shows up with two horses and looking like she wants to cosplay that scene in The Parent Trap where Dennis Quaid tries to tell Lindsay Lohan that he’s going to marry a 26-year-old. I’m into it, honestly.

They start trotting their horses around the little resort pool and then they roll up on Chris Harrison making some margs. He offers them some and then full-on sprints to the next location. It looks like someone at ABC finally realized that Chris gets paid way too much for 30 seconds of airtime a season and is making him earn his paycheck. I fully support this.

It’s cute, but Brendan would really just like Chris to f*ck off.

At the night portion of the date Brendan tells Tayshia that he’s been divorced. She tells him that she has also been divorced and they feel connected. Well, I guess it’s a less tenuous connection than “both our parents hitchhiked!” so maybe they’ll at least make it longer than Dale and Clare.

Tayshia is clearly very into Brendan and gives him the rose. They go outside for fireworks which, on the scale of Bachelor dates, I would say falls above “performance by the winners of Listen to Your Heart” but below “line dancing at a bar”.

And that’s all for this week. Ryanne’s back with the recap next week so if you hated me, no need to say so in the comments. My mental health is already hanging on by a piece of floss, thanks!!