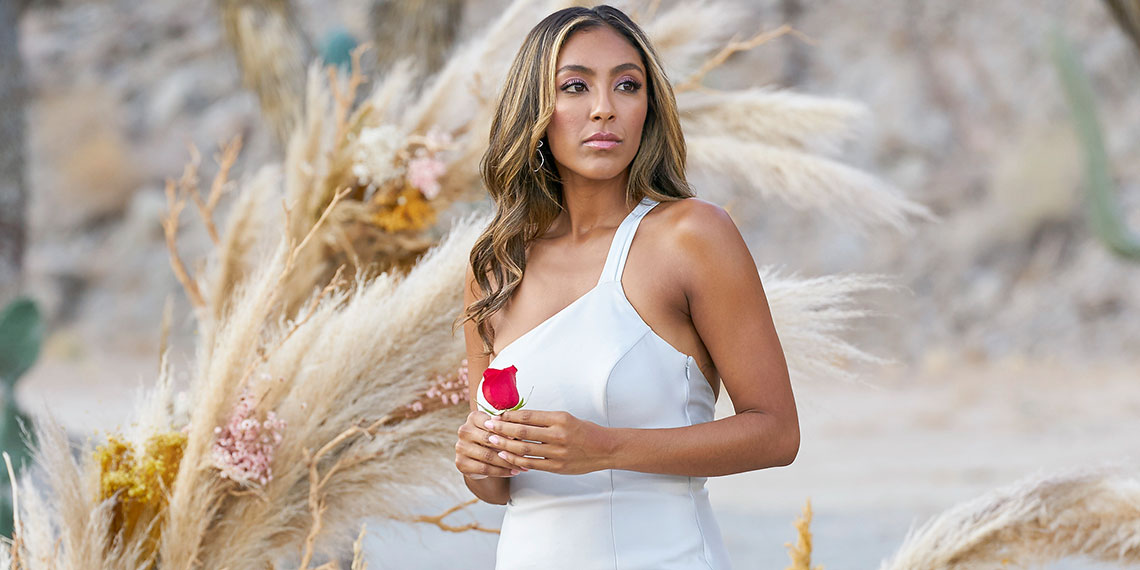 The Best ‘Bachelorette’ Recap You’ll Ever Read: Be Still, My Cold, Dead Heart

Well, friends, we did the impossible. After 11 weeks, two Bachelorettes, and one global pandemic, we’ve made it to the finale! Tayshia is down to her final three men. As per usual, Chris Harrison is doing the most in his intro voice-over:

Chris Harrison: Will she get engaged to her soulmate, or will she DIE A LONELY OLD SPINSTER?!

Damn, Chris. I know we’re living in the time of COVID, but there are other men on this planet if she decides she’s not into these guys!

We pick up where we left off, with Tayshia having a sidebar with a producer. She’s being filmed behind some blinds after being blindsided by Ben. You gotta love the producers’ commitment to imagery and metaphors on this show. They had to get them where they could, because lord knows Ivan wasn’t going to liken love to his testicles morphing into icicles on his fantasy suite date. Ben is sitting awkwardly on Tayshia’s couch. He says that by looking at Tayshia’s eyes, he sees there’s more under there. Kind of a strange way to point out under-eye bags, but Ben’s never really had a way with words. I guess it beats the alternative I’m used to getting:

Ben’s talking a lot about his “love” for Tayshia, but isn’t really saying much. When Tayshia pushes back and asks him if he’s always going to run when things get hard, his response is, “I blew it”. Accurate, but not promising! Instead of sticking with her gut and sending him home for a second time, SHE INVITES HIM TO THE ROSE CEREMONY! They then walk out together, hug, and Tayshia initiates a very passionate kiss. Who knew she was a sucker for a moose knuckle?! While I definitely don’t agree with her decision, I can’t wait to see Zac and Ivan’s reactions when Ben rolls up to the rose ceremony.

Ivan walks into the rose ceremony with the pre-elimination confidence that has become a hallmark of this show. Feeling the pressure from the producers for not delivering the required love similes on the ice bucket date, he offers the consolation prize of saying it feels awesome to be “open” and “vulnerable” (or “vonurble”, as Tayshia would say). Not for long, buddy. Zac says he’s ready for a proposal. Ben walks in with a goofy grin on his face, as if he expects Ivan and Zac will be happy to see him. I think Bennett gave the book about emotional intelligence to the wrong guy.

Like many people who’ve gotten dumped, Tayshia proceeds to explain Brendan’s absence by saying “it just didn’t work out.” Control that narrative, girl! She’s about to start handing out roses but then stops and asks Ivan if they can go talk. Ivan’s face says he knows what’s coming next. They then have a cryptic talk about religious differences, but give no specifics about said differences. Is Ivan a Scientologist? That’s the only legitimate theory I can come up with for this abrupt dismissal.

All kidding aside, it may be that Ivan is atheist or agnostic. Tayshia has always been open about her devout Christian beliefs, so it’s possible this is the reason she sent Ivan home. It’d be a shame if that were the only reason she eliminated him, but, let’s face it, she’s been favoring Brendan and Zac for weeks. Given the honest conversations Tayshia and Ivan had about race, it seems strange, and frankly frustrating, that ABC isn’t allowing an unfiltered exchange about religion. Then again, this is ABC we’re talking about, so maybe that’s asking for too much. Ivan takes the elimination in stride like the angel he is. Love you, Ivan! See you in Paradise.

The next day we catch up with Tayshia writing in her journal. She meets up with her family and I remember how much I enjoyed Tayshia’s dad, Desmond, eviscerating Colton when Tayshia was competing on his season. Like most viewers, Desmond doesn’t have time for BS. Tayshia tells her family that they’ll be meeting Ben, whom she had previously sent home. Desmond is understandably skeptical and wants some answers. This is gonna be good.

Ben meets with Tayshia’s mom, Rosario, first and keeps talking about how he’s never felt this way before, and the way Tayshia makes him feel, yet he can’t seem to identify the feeling(s) in question. Everything he says is surface-level and there’s no real substance to any of it. It seems like Ben is in love with the idea of love, more so than Tayshia specifically. It doesn’t go much better with Desmond.

Desmond: What do you see in Tayshia?
Ben:

Ben also tells Desmond about how he and Tayshia talked about “showing up” for Tayshia. Does he think that physically coming back after being sent home is what showing up means? She meant showing up for her emotionally, Ben!

The tone of Zac’s meeting with the family is completely different. Instead of making his answers all about him and his feelings, he expresses his love for Tayshia by showing love to her family. He even seems to win over Desmond, who says he’s going to be tough on Zac. Instead of saying the things he thinks Desmond wants to hear, Zac is honest about his failed marriage and is able to reflect on his past mistakes, even weaving in a reference to the standards Desmond has set and how Zac wants to live up to them.

I gotta give it to Zac; he is incredibly authentic and eloquent. He talks about marriage with Tayshia like it’s a real thing that’s going to happen, not some abstract idea like Ben does when he broaches the subject. Zac is making my job as snarky recapper very difficult, but he totally won me over — until he started pretending he was an authentic New Yorker with that whole pizza charade. Zac, you’re from South Jersey! Rep some hoagies like the Philly boy you are and cool it with the tired NYC cliches.

The next day Tayshia hears a knock at her door. Fearing that Bennett has gone full American Psycho, she reluctantly answers. It turns out to be her dad, which isn’t a much better sign. He tells her that the family doesn’t want her to make the biggest mistake of her life by rushing into another marriage. Tayshia starts to break down recounting how her dad was there for her in the throes of her divorce. It was raw and one of her realest moments thus far. She’s starting to have doubts.

On their date, Zac reassures Tayshia that he’s ready to take the next step, but Tayshia seems skeptical. Damn, Desmond really got to her! They find out that their date is to learn a wedding dance routine and Tayshia looks about as excited as Brendan did when he met Neil Lane to try on wedding jewelry. Gotta love karma. She keeps getting in her own head and is struggling to relax into the dance moves. Zac is patient with her and they actually pull off a sweet little routine. I’m honestly impressed they learned that in one lesson. It took me and my husband about two months to put together a solid first dance. Respect.

Later that evening they have a casual night in, and Tayshia is honest about her fears that Zac’s feelings will change. He tells her that he is nine years sober today and that his sobriety allows him to not run away and that he’ll love her no matter what she decides to do with her life. Ok, why am I crying in the club right now? And by “in the club” I mean “on my couch”.

Tayshia seems convinced, and frankly, so am I. It’s one of the most authentic exchanges we’ve ever seen on this show and it’s nice to see a couple talk about real-life issues for a change. “I think she believes in me,” Zac says, and I start to tear up. WTF is happening? Is this show…actually making me feel genuine human emotion?

Me watching this season of The Bachelorette:

When Ben meets up with Tayshia “the next day”, she is wearing the same tragic denim number she was wearing when her dad came to talk to her. So she’s either running out of wardrobe options in quarantine or there’s a bit of a continuity issue here and she went to dump Ben after talking to Desmond. She tells Ben that her heart is with Zac and, as usual, Ben looks like a deer in headlights. He takes it pretty well, albeit with way too many “umm”s, and says he’s happy for her. I do feel bad for Ben. He’s a sweet guy and he deserves to find love, but he needs to work through some of his issues with self-worth before jumping into a serious relationship, let alone a marriage. We’re rooting for you, Ben!

It’s engagement day! Tayshia and Zac are getting ready and Neil Lane is back to shill his gaudy rings. Zac looks handsome in his blue suit. Tayshia meets up with Chris Harrison and the exchange is kind of odd. She says she questions if she’s ever been in love until now and then bursts into tears that don’t really look happy. Even Chris seems confused.

Chris: What is going on?
Tayshia:

The proposal set-up is kind of a hot mess. The area rug from the Airstream trailer fantasy suite isn’t helping. Tayshia tells us she feels stressed, overwhelmed, and scared. So basically all of the things one should be feeling right before getting engaged after knowing someone for 30 seconds. She says she doesn’t know if she’s doing the right thing. I’m a little concerned. Is she feeling the pressure of not wanting to disappoint ABC and the fans given the whole Clare debacle?

Things improve when Zac arrives. His engagement speech is really personal and from the heart. It’s undoubtedly the best one I’ve ever heard on this show or The Bachelor. Tayshia starts her speech and after telling Zac that she knows she told him she loved him, takes an extremely long, producer-suggested pause. I admit they got me for a second and I was scared she was bolting. But she continues and tells Zac she wants to jump in fountains all over the world with him . He gets down on one knee and she says yes! Like the true New Yawkah he is, he yells “TAXI!” and the two ride off Flintstone-style into the desert sunset in a cardboard cab the way god and Chris Harrison intended.

And there we have it! Unfortunately (or fortunately, given the endless hours of our lives ABC takes each year) we have no After the Final Rose to catch up with Tayshia and Zac, but it looks like they’re still going strong. This was an excellent season with some of the most mature and authentic men we’ve ever had. Keep it up, ABC! Thanks for joining me this week, guys, and congratulations to the happy couple!