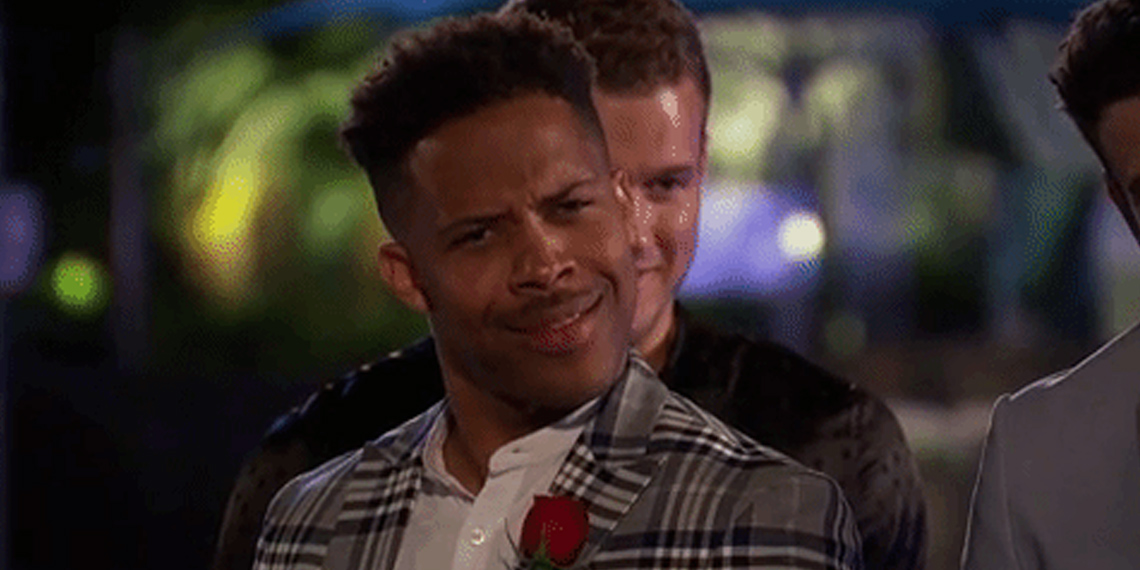 Well, people, we made it to the best Bachelorette recap you’ll ever read: week 5. So far only one of Becca’s 10 remaining suitors has proven to be a convicted felon. Tbh I expected that number to be higher with this crowd. Anyway. This week Becca and the men are off to Las Vegas! Because nothing says true love like 24 hour wedding chapels and gambling addiction.

Also, how many times do we think we’ll hear the phrase “roll the dice on love” tonight? It’s 8:02 and they’ve already said it twice… I’m scared.

JASON: She had Vegas going on from head-to-toe.

That’s not Vegas, Jason, that’s an internalized cry for help! Like, WHY ARE THERE SO MANY GODDAMN SEQUINS?? I am glad, though, that the men are starting to become aware of the visual assault happening before our eyes every damn week. They need to go into this with both eyes open.

Colton gets the first one-on-one date this week. I guess Becca is really feeling the connection between them.

Okay, but what in the actual fuck is this date, though? The entire thing could have literally been filmed in front of a green screen. It doesn’t make sense. There’s some sort of camel tour happening, except instead of following beautiful Vegas sights and landmarks they’re following a chain link fence. Is that a hot tub at the end of this tour? Of fucking course. Because who wouldn’t want to have a nice romantic soak in the middle of a parking lot?

HAHA I love that these camels are trying to save Becca from herself rn. They’re walking at least 20 paces away from each other, which is good because now Becca can really think about if she likes Colton or if she just likes that another girl wants to bang him.

These camels out here doing the lord’s work

Cut to the cocktail portion of the date. Do we think Colton is referring to Olympic gymnast Aly Raisman when he starts talking about his ex who didn’t love him? Because if he is, that’s blasphemous and I won’t hear it. So sorry Aly was too busy winning multiple gold medals and crusading for women and sexual assault victims to tell your thirsty ass that you’re pretty, Colton. SO SORRY.

Okay, Colton is less hot the more they zoom in on him and Becca making out. Why does he keep grabbing her hands and making air circles with them?

Colton gets the rose, but are we really surprised here? The only thing that could have stopped him from getting that rose was if he said he murdered his grandma or is a registered sex offender. Oh wait. That actually does get you a rose on this show these days.

For the group date Becca brings out Wayne Newton to spice things up, and I have a lot of questions here. One, what are the numbers for the celebrity guest budget this season? ‘Cause right now it looks like all ABC can afford are third-tier celebs blackmailed into being there. Also, why are Wayne Newton’s eyes so fucking terrifying? They look like they’re trying to pop out of their tightly pulled prison. It’s so alarming.

NOOOOO. Why is there another episode that involves singing? What did I do to deserve this?

ME FINDING OUT WHAT THE GROUP DATE IS THIS WEEK:

Honestly, I can’t stop thinking about Wayne Newton singing to his wife. I’m going to see it in my nightmares.

Once again, Becca forces the men to write a song about her. I feel like Becca listed her hobbies as “sports and music” and they just ran with that for all of her dates.

Chris is feeling cocky AF because he got one half-hearted clap from Richard Marx two episodes ago. YOU’RE NOT BETTER THAN ME, CHRIS.

The guys have to sing their songs in front of a live Vegas audience. How pissed do you think these people are at Groupon for misleading them about the talent this evening? Because this feels like cruel and unusual punishment tbh.

The men start performing, and I can’t decide what’s more painful: the sounds coming out of their mouths or the sequined atrocity on Becca’s body.

After the glee club concert from hell, Becca takes the guys to the location of part two of the date: an abandoned ice rink! Seriously WHO is planning these dates?? Why does every date locale look like it was filmed outside the Las Vegas city limits? Are these guys not allowed in certain parts of Vegas? With their criminal records, this seems likely.

CHRIS: If you want something you’ll make time for it.

Spoken like me justifying my decision to go completely scorched Earth on a guy I was seeing for three months because he wouldn’t come meet me at a bar one night. FUCK YOU, JAKE.

Blake aka the poor man’s Miles Teller gets the group date rose, and somewhere Chris is plotting how to murder him and shove the pieces of his body down a trash chute. His abandonment issues don’t at all feel like a red flag in this moment.

Finally, we get to the two-on-one date with Jordan and David that ABC has been teasing all goddamn night. Vegas odds that Becca leaves both of them in the desert to die together?

Okay, but WTF is this date? They’re just stranded in a canyon somewhere? No food? No Champagne? This is like that scene in Rat Race where Cuba Gooding Jr. has to make shoes out of his own shirt and trek through the desert. Actually, I’d pay to see Jordan try to do that.

Becca’s like “it’s so peaceful and quiet out here!” Meanwhile, David feels like this is his cue to describe, in minute detail, the sediment on the ground. He should be eliminated for not knowing the important life skill of when to shut the fuck up.

Becca realizes she’s not going to get any peace and fucking quiet with David here practicing his monologue so she pulls David aside to talk to first and he immediately starts shitting on Jordan.

DAVID: Jordan said he was SETTLING with you and that you’re his SECOND choice.
ALSO DAVID: I reminded Becca of her ex and most traumatic experience to date, so yeah, couldn’t feel better right now. I’m so happy for me.

Okay, Jordan’s sad electricity story makes me feel feelings but also reminds me of when Derek Zoolander went back to work in the coal mines, which was such a moving part of that film and possibly where Jordan got the idea for his sob story. Just saying.

Is it just me or does it seem like Becca is leading the kindergarten class trip from hell? Becca’s like “you guys are really ruining my date of sitting in the desert in silence so could you cut it the fuck out.” PREACH, girl!

OH SHIT. THE CHICKEN GOES HOME. Honestly, about fucking time. Once again we learn that starting shit in the Bachelor mansion gets you nowhere. I mean, I get the impulse because that’s kinda my current career philosophy and personal brand, but still.

Back to Becca’s date with Jordan. We enter the dinner and drinks portion of the evening, and I have a feeling Jordan is still going home. He’s only in competition with himself, and that can’t end well for him. I mean, he’s funny, but he has about as much depth to him as a toaster.

JORDAN: I really want to get to know the real you.
ALSO JORDAN: Do you like to go out on Fridays?

HAHA did he really just ask her about her weekend habits? I’m pretty sure that when Becca said she was “an open book, ask me anything” she didn’t mean ask her how frequently she brunches.

Jordan gets sent home too, and honestly I can’t say I’m surprised. I knew it was over for him when he started going into an in-depth discussion about how the rules of hair care are simple and finite and any Cosmo girl would know.

JORDAN: How did I get sent home? I can speak, I can walk.

Yes, Jordan, it seems those are the only qualifications one needs for this show these days. RIP, friend. You and your gold booty shorts will be missed. Can’t wait to see you on Paradise!

Becca grabs Chris right off the bat and Chris is like “you’re lucky I’m willing to breathe near your direction after yesterday.” Okay, Chris you can go shave your back now.

Is it just me or is Becca wayyy too sensitive to be the Bachelorette? I know she got dumped on national television, but it feels like every other word that comes out of these guys’ mouths is triggering for her.

Chris tries to steal Becca away from Wills and even though Wills is dressed like my grandpa’s sofa he’s acting cool AF in this situation. It’s so fucking hot.

Chris: Can I steal you for a sec?
Becca: No
Me: #thebachelorette pic.twitter.com/Tz197Raevs

THIS IS SO UNCOMFORTABLE. I want to crawl into my wallpaper rn. I can’t.

Chris keeps asking for two more minutes and Wills, whom I was always sure was a Hufflepuff but am now CONVINCED is a Gryffindor, is like “nah, step off.”

WILLS: I’m gonna ask you to respect me and please GTFO
ME:

I’ve said it once, I’ll say it again, but WILLS YOU CAN CALL ME. This feels like an appropriate time to put it into the universe that if Wills is not the next Bachelor, I will personally burn ABC studios to the ground.

Sidenote: If Colton ignored Becca all night you know she would still give him a rose. I feel like this attention thing is a flimsy excuse at best to send Chris home.

Chris is like “you make me a better man because normally when a chick pisses me off I bail and I’m not doing this here.” Becca, honey, I say this with love, but this guy is a bigger red flag than that dress you have on rn. SEND HIM HOME.

John ends up getting sent home because ABC doesn’t want us to have nice things. How the floor shitter/CONVICTED SEX OFFENDER lasted longer than the guy who created fucking Venmo is beyond me.

ME WATCHING BECCA RUIN HER LIFE ONE ROSE CEREMONY AT A TIME:

Well, fam, that’s it for this week. Next week it looks like the Bach crew is going to the exotic destination of Richmond, Virginia. I’M FUCKING DEAD. At this rate they should take a “magical journey” to the parking lot outside the Roosevelt Field Mall by the end of the season. Kisses!