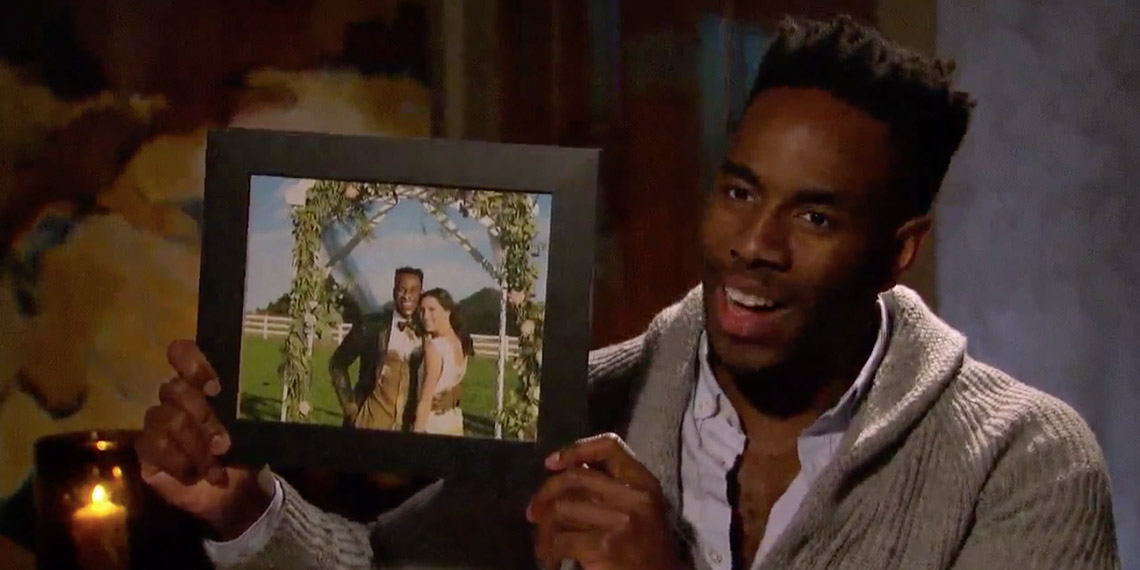 Hello friends! We’ve made it to week two of Becca’s quest to find love, and I’m not sure what I find more alarming about this season: that she’s already gotten rid of the most promising contestant (#JusticeforJoe) or that I’m actively rooting for Jordan to take over as her stylist. Anyway, shall we dive right in with this week’s Bachelorette recap?

The episode begins with Becca impractically riding a bike around LA and looking far too happy about dating. She does realize what’s out there in the world, right?

BECCA: I’ve been through a lot this year and I need to chill for a little bit.
ALSO BECCA: I’m going on 20 first dates tonight!!
ME:

And here we are. The very first group date of the season and Becca shows up in yet another white dress. Subtle, Becca. V v subtle. As far as I can ascertain, the purpose of this date is for Becca to watch 12 grown men strip while drinking Champagne? I support this.

Yesssss. Rachel is back! And she brought her fiancé with her. How sweet. All I know is she better rein in some of that personality of hers because these guys might get confused and start imprinting on the first woman to stop speaking in catchphrases.

Ah, yes, the true meaning of this date comes out. The boys have to crawl through mud and compete in some sort of demented obstacle course for Becca’s enjoyment, all while wearing formal wear. I think the real obstacle here will be watching Jordan break down at the thought of ruining the delicate fabric of his jacket and still being forced by an ABC producer to consider him sexy. Bring it on, ABC. Bring. It. On.

Watching Rachel break down this obstacle course just makes me remember what having a Bachelorette with a personality was like. Sighs. Take me back?

Jordan takes it upon himself to describe this obstacle course just in case we didn’t understand Rachel’s clear, definitive directions from five fucking seconds ago. He’s  like “basically we have to drag a ball and chain, get cold feet, go up a slippery slope, and buy a ring, and that’s what love is.” Did you hear that, Becca? AND THAT’S WHAT LOVE IS. Jesus. She’s going to die alone.

Lincoln wins the obstacle course and people are PISSED. Connor is like “he’s a cheater and he can’t be trusted,” but, like, I feel like that’s the least of the red flags in a group full of adult men with carefully applied spray tans, ya know?

Okay, I can’t take Lincoln seriously ever since I found out he is a floor shitter. Like, he thinks toilets are unsanitary so he makes a SHIT CIRCLE out of paper and SHITS ON THE FLOOR IN PUBLIC and picks it up like he’s picking up after a dog. He is revolting.

LINCOLN: Kissing Becca is like flying to the moon on a Pegasus.

I rest my fucking case.

Cut to Becca talking about being hopeful for “real connections tonight” and Lincoln all but making out with her photo after one glass of Pinot Grigio. Should she pack up her bags now or…?

Connor is like, “Lincoln is a giant douchebag who can’t be trusted.” Meanwhile Connor’s shirt is nearly fully unbuttoned. The irony in this room rn is next fucking level.

LINCOLN: That picture was like my medal of honor, you know?

NO, LINCOLN, THEY GIVE THOSE OUT FOR WAR. THIS IS NOT THAT.

Oh my fucking god, is Lincoln TATTLING on Connor? He pulls Becca aside and literally bursts into tears about his picture getting smashed. Like, is Becca babysitting rn? I didn’t realize she was running kindergarten politics over here.

Jean Blanc gets the group date rose, proving that disgusting comments about a woman’s lips only work if the rest of the men in the room are literally flaming piles of garbage. Congrats.

Okay, I was unsure if Lincoln was actually crying at the cocktail party earlier (I’m blaming the garbled consonants he’s trying to pass off as language) but now he’s actually sobbing. Like, openly weeping. In front of his competition. In broad daylight.

LINCOLN: I feel like I’m being tested here.
RANDOM GUY WHOSE NAME I CAN’T REMEMBER: We’ve all been tested here one way or another.

Do we think he’s referring to the emotional journey they’re going on or the mandated STD screening they all barely passed? It’s a toss-up for sure.

Moving on. Blake gets the first one-on-one date, and I’m having a hard time recalling who tf this guy even is? Is this the horse guy from After The Final Rose? Has he always looked this way?

The date starts off strong with the couple driving out into the slums of California. Tbh it looks a little like my neighborhood in Bushwick but, like, nicer. Meanwhile, Blake is quietly panicking. He’s like “is that graffiti on the walls??” The panic in his voice rn is a clear indicator of how white this date is about to be. Carry on.

Oh good fucking god. Someone gave Becca a garage jumpsuit and and she is jazzing it up by promoting her latest Charming Charlie purchases. BECCA, THAT BELT SHOULD BE BURNED AND SO SHOULD YOUR STYLIST. Seriously, she doesn’t want you to be happy.

Wait. This date is actually amazing. They want Becca to go full-on Taylor Swift and smash the shit out of all of her ex-boyfriend’s stuff. I mean, this is common practice on all of my first dates too, but let’s hope the response will be better for Becca. And by “better response” I mean hopefully the cops won’t be called.

^^actual footage of what’s happening on this date rn

Cut to the cocktail portion of this evening. Ugh are they going to spend this entire fake dinner talking about their pain and heartbreak? Because if so, I’m going to have to entertain myself with the bottom of this wine bottle. Brb. I’ll be back when they stop pretending like being dumped is a strong foundation for building a relationship.

The second group date is going to involve something athletic and I know this because Becca shows up to the date wearing METALLIC GYM SHORTS. I think I finally know what Lincoln meant about being tested, because I’m starting to feel like her stylist wants to fight me.

Apparently this date is going to be a game of dodgeball and the guys have to train with small children before the big tournement. Why is there always at least one date where they exploit random children?

RANDOM CHILDREN: DO YOU THINK BECCA WANTS TRASH? NO? THEN RUN FASTER!!
ME:

After a full 20 minutes of being emotionally abused by children, the guys have to participate in a dodgeball tournament. I’m giddy at the prospect of this bloodshed.

“That’s a bold strategy, Colton. Let’s see how it plays out for him” —All of America watching the dodgeball date

Hmm. I wonder if they will rebroadcast this episode on ESPN8 The Ocho…

Moving on to the cocktail party. My retinas are slowly imploding at the sight of Becca’s outfit. I just don’t even know where to look. Why are there so many sparkles? There are sparkles on her dress, her eyeshadow, and those godforsaken chokers. Is her aesthetic the floor of a Forever 21? I’m confused.

Okay, what do we think Colton is going to confess here? I feel like now would be a good time to announce the whole v-card thing, especially with the state of undress he’s currently in. His shirt is literally unbuttoned to his navel. I can only assume he’s trying to go for the “I’m not a regular virgin, I’m a cool virgin” vibe. That, or he’s going to spill the beans about Tia and wants to distract Becca with his cleavage.

COLTON: I had a relationship with Tia, and once I realized she wasn’t going to be The Bachelorette, I bailed.

^This shot of Colton reevaluating his life and his choices is eerily similar to me when I look at my bank statement on Sunday and realize that I was not the victim of fraud and those “suspicious” credit card charges are all me.

Becca starts getting ready for the rose ceremony and she’s acting shocked that men are selfish scumbags. She’s like “there’s been so much drama and they keep making it all about them!” WELCOME TO THE YEAR 2018, BECCA.

Okay, that speech was a low-key cry for help. Did anyone else notice that? Becca’s like “this week has made me realize that I should have checked into a convent instead. Anyway, let’s do the damn thing.”

ME AND ALL OF AMERICA: But are you, like, okay?

I guess that speech must have put the fear of Chris Harrison in them. They’re tip-toeing around Becca like she might just say “fuck it” and get rid of them all. They’re even starting to treat her like she’s a human being and not just a means to their Instagram endorsement deal ends.

Jordan starts taking off his clothes and it’s like, fucking finally someone gets drunk and attempts to ruin their life by the pool. I’ve been waiting for this for two goddamn episodes. God bless Jordan for taking one for the team and actually making this cocktail hour bearable.

David, the man who showed up dressed in a full-on chicken suit night one, is like, “Jordan is such a clown.” POT, MEET CHICKEN.

DAVID: Do you think it’s respectful to take off your clothes like that?
JORDAN: I’m rubber, you’re glue.
ALSO JORDAN: If we were to take an IQ test I’m certain I’d pass higher than you’d think a male model would.

Becca pulls Colton aside, and it’s clear she’s pissed that he betrayed her trust and played a game of “just the tip” with one of her closest ABC-approved friends. She keeps talking about how “angry” and “hurt” she is but TBH she’s just jealous that Tia banged one of the hottest guys in the house before she could. Colton will most certainly be staying. At least until she can revenge make out with him in front of Tia.

Moving on to the rose ceremony. I can’t decide what’s more iconic in Bachelor/ette rose ceremony history: Corinne showing up after a nap or Jordan showing up in his underwear and a fuzzy, pink towel.

Ricky, Trent (who the fuck was Trent?), and Alex all get sent home. What I wouldn’t give to be a fly on the wall when they have to explain to their bosses why they took an extended leave of absence only to get sent home before the guy who said “I’ve shown my fashion, I’ve shown my skin, what more can I do?” Also, Alex, save those tears for someone who gives a shit. Please. You are a tall, semi-attractive white man. You’ll be fine in this life.

Next week’s episode looks like it should be a dumpster fire for Becca. Here’s hoping I’m not just talking about her outfits. See you betches next week!