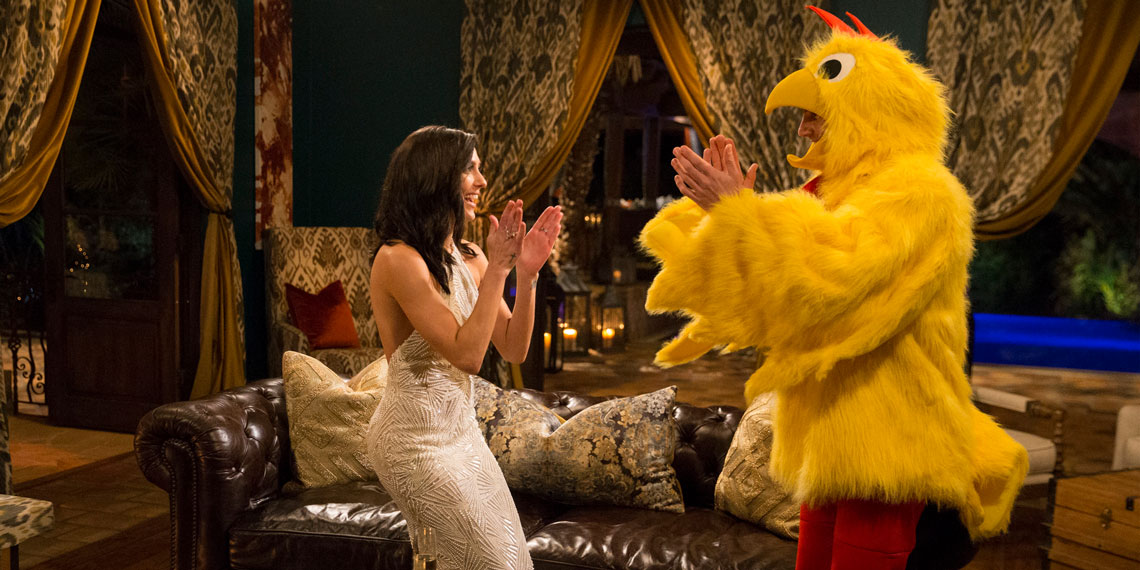 The season premiere of The Bachelorette finally arrived and it was…underwhelming, to say the least. Seriously, the most exciting part of that entire episode was seeing how far Jordan would go to extort himself for more Instagram followers. But we’ll get to that in this Bachelorette recap. First, let’s start at the beginning. And by “beginning” I mean the designated 10-15 minutes ABC will need to replay Becca’s utter humiliation and devastation for the sake of last season’s ratings. Obviously.

The episode opens to the tune of Becca sniffling, so it’s off to a strong start already.

MY ROOMMATE AFTER 2.5 SECONDS OF WATCHING BECCA IN HYSTERICS OVER THE POLAROIDS: I’m out, I can’t do this.

Take me with you?

The camera keeps panning to different shots of the scenic landscape of Minnesota. I literally can’t tell if I’m watching Becca’s season or some hybrid version of Bachelorette/Winter Games.

BECCA: This is my time, my moment, my choice

Lol I especially love that she keeps emphasizing the word “choice” here. As if she would ever choose Arie had she not been held captive by ABC for six weeks. Thanks for the clarification, Becs!

Becca meets up with a few of the former Bachelorettes, otherwise known as their Victor’s Tour. They’re supposed to drink wine and give advice as to what Becca can expect from the men this season but, like, she’s dated a living, breathing human man before so I’m sure this won’t be much different.

ME: Isn’t this where you dry-humped Jordan in the middle of a cocktail party?

Tbh the only advice I’m coming away with from here is that I never want to sit next to Jojo on a couch, heinous jumpsuit or no. That bitch is beautiful.

We now cut to Becca picking out her dress for night one. I’ve already discussed AT LENGTH my feelings about Becca’s stylist (she’s a life ruiner, Becca!), and while I don’t love this dress, she does look great this season. She’s looking like she might actually find that former athlete of her dreams.

The men are starting to arrive, but first, we get to see what a few of these garbage people are like in the comforts of production’s pre-approved location where they can play out the desired storyline. Here’s what we’ve got:

Garrett is from Reno. BYE. Hard pass. Becca, send him home for that alone.

Jordan, the self-proclaimed “model,” proudly states that he can see himself on the couch with Becca. What an amazing future you’ve laid out for her!! How’s a girl supposed to turn down an amazing offer like that?!

JORDAN: I can see us on the couch, in sweats, with the chocolates.

As if I am to believe that a single glass of Champagne at the cocktail party won’t be Jordan’s cheat day for the month. K. Jordan is like that skinny girl who thinks tweeting about how much pizza she eats makes her sound cool.

Moving on to the limo introductions. Okay, so I know Colton is trash because of his v sketchy past prior to filming, but he’s so beautiful I might forgive him. Like, what a cute intro he had! Good work, Colton. Next.

Grant’s next out of the limo and he starts off his relationship with Becca by bringing up her ex. Thanks for never letting the girl forget she’s a pity Bachelorette!

Jean Blanc makes Becca say “let’s do the damn thing” in french. My Do The Damn Thing official count is at 6 and we’re only two minutes into the limo intros. Someone fucking kill me please.

GOOD GOD. That hair. If Leo walked out of the limo for me I would call Chris Harrison over, slap him, and say “fuck you.”

Jordan comes out of the limo and visibly has to turn his personality on before he can tell Becca hello. Didn’t anyone else see that stumble??

Oh! I stand corrected. Apparently Jordan is the creative genius behind his very own personal brand: the pensive gentlemen. Lolololol. Please tell me he has that printed on a business card. Like, did he steal that brand name from one of Derek Zoolander’s looks? Or from a shitty whiskey subscription box service?

Okay, but why are these guys fucking bewildered that there are more than five people competing for Becca’s attention? They have watched the show, yes?

JEAN BLANC: There’s a lot more guys than I anticipated.

THIS ISN’T HINGE, JEAN. You’re gonna have to do a little more than mumble some French and rely on your bio line to get you laid.

Kamil is the reason I question if men should be allowed to walk freely in this world. Right off the bat he’s like, “relationships work 60/40 so you better come to me, Becca.” Did he just BECKON her like she’s a dog or something? Did he??

If you’ll recall, Kamil was the guy who wrote “social media participant” as his job description, which felt honest at the time but now feels a little too spot-on. Why do I get the feeling that he’s about to comment on Becca’s Instagram from last night and say something like “whatever, you’re fat and I didn’t want you anyway”?

Okay, I retract my previous statements about Jordan. He needs to stay on this show forever. While the rest of the guys are feeling a single moment of insecurity for the first time in their entire damn lives, he’s acting like he’s Tyra Banks when one of the models from middle America shows up in a Juicy Couture tracksuit to judging.

JORDAN: First off, put some goddamn socks on. At least wear a pocket square.

Goddd fucking damnit. There’s a grown-ass man dressed in a chicken suit. I thought this was The Bachelorette, not my suggested matches on Hinge.

Wait. Was that it? That’s all the men? I genuinely do not remember one single guy. How am I supposed to guess which guy will get the First Impression Rose if there was no lasting first impression to speak of??

BECCA: As you guys know, I went through a very public breakup, so please stop fucking bringing it up.

Little does she know that two minutes prior to this cheers-ing a group of them were in the kitchen commenting on how courageous Becca is for even finding the will to get out of bed each morning. So sweet.

So far none of these guys are really impressing me. There’s more personality in the cardboard cutout of Arie than in this entire mansion full of men.

Speaking of which, Jean Blanc decides that his second impression will be to gift Becca with an engraved candle in which he’s inscribed a poem. Just when I thought the “colonoisseur” couldn’t out-douche himself, there he goes exceeding my expectations. Congrats.

God, how many of these men are going to incorporate the phrase “let’s do the damn thing” into their conversations with her?

BECCA AFTER HEARING “LET’S DO THE DAMN THING” FOR THE 20TH TIME THIS EVENING: Omg I said that one time!

Becca is actually giving the chicken man the time of day and it’s making me question her already shitty taste in men. This is going to be like the Tickle Monster all over again, isn’t it? Ladies, we have to set the bar higher than men that are hiding their fetishes behind weird costumes!

Becca’s like “Garrett likes to fish and hunt and reminds me of home so I’m into him.” What a strong foundation on which to build a lasting relationship. *sips wine*

Is it just me or is this cocktail party especially boring? Like why hasn’t anyone gotten wasted and tried to jump into the pool? Or at least accidentally spilled red wine on Jordan’s pocket square for funsies?

Chris, whom I actually liked for three seconds, tries to start some shit with Chase because that strategy worked so well for Blake and Whaboom last season. He’s like “some girl texted me and said you’re a douche and I’m telling everyone!!”

Okay, this conversation is just painful to watch. Like, what did Chase even do? Did he ghost this girl or something? Cause that’s kind of what it sounds like, but also so has every other pocket square-wearing asshole in that room. Whatever. I’m bored now.

Aaand the truth comes out about Jake From Minnesota! If you’ll recall, Becca casually whispered “what did I do to deserve this” under her breath when he exited the limo, so it’s clear she’s known him for longer than this cocktail party. Why do I feel like he’s the guy she friend zoned back home who’s now followed her onto The Bachelorette?

JAKE: I’ve had a very transformative year. Now that all of America wants you, I want you too.

First of all, I’m really curious what Jake means by “a very transformative year.” My two immediate thoughts: he either like, went to rehab or studied abroad in Europe. There is no in-between.

Oh shit, she just sent him home! In the middle of the cocktail party! I mean, I wasn’t expecting this guy to last but I certainly wasn’t expecting Becca to be so cold when she let him go. I knew you had it in you, girl!

Wills tries to explain his Harry Potter tattoo and it’s eerily similar to the way my sorority sister tried to explained the hidden meaning behind her “live, laugh, love” tattoo. Just quit while you’re ahead, kid. Also, people who think liking Harry Potter makes them quirky and interesting are among my least favorite people. Like, let me guess, do you also enjoy wine nights?

Becca’s about to hand out the First Impression Rose and I genuinely have no idea who she’ll pick. The only connection I’ve witnessed this entire fucking episode is between the chicken guy and his chicken puns. At least he’s consistent.

Anddd Garrett gets the rose. I’d say I’m shocked, but he does seem like her type. After Arie, I doubt this girl will ever date outside her comfort zone again.

We’re finally at the rose ceremony, and there’s so much fake tension in the room I can’t. Though by far the most interesting part of this entire episode is watching the guys slowly start to unravel when Becca picks the chicken guy. It’s fun to watch guys question their self-worth for once in their goddamn lives.

LEO: I’m a different kind of guy, the best kind of guy. There’s no way she won’t pick me.

BECCA: *chooses a grown man in a chicken suit over him*

Final rose cut: Jake, Kamil, Joe the Grocer, Darius (*weeps*), Chase, Grant, and Christian all get sent home. All I have to say about this is, Joe, you deserved better. #JusticeForJoe

KAMIL: I’ve never been dumped this hard on a first date.

Kamil, please learn from this experience. That’s all.

Well, that was thoroughly disappointing. I think filing my taxes may have been more entertaining than those two hours of my life that I will never get back again. The most shocking revelation of this entire episode, I think, was that Christon’s name is pronounced “Christ-ahn” and not “Kristen”. ABC, you better step the fuck up with the drama! I came here to drink wine and talk shit, not drink wine and pass out on my couch before 10pm. BYE.