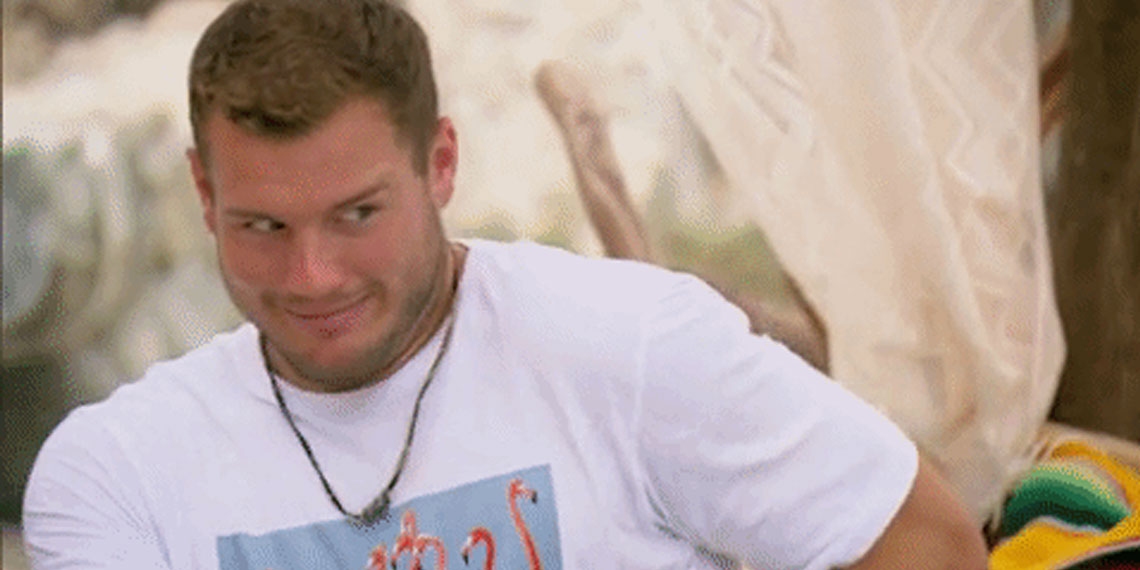 Your boy Diggy is back with his lukewarm takes about your favorite summer show, Bachelor in Paradise. If you prefer hot takes, just put this article in the microwave for 30-35 seconds. Let’s recap the Monday and Tuesday that was BIP.

Monday’s episode kicks off with our favorite couple, Tia and Colton, but now Chris hopped in the bed and said, “Scoot over, I want in!” Tia calls Chris out for kissing Krystal last night, and Chris doesn’t deny it. But he pretty much tells Tia:,“Yea, but let’s not let my other girlfriend mess up what WE have, baby.” (*other girlfriend, Krystal, enters stage left*) Krystal proceeds to sit Indian style in front of Chris and Tia like this is Woodstock 1968 as they hash it out. (I’d like to point out that Krystal is drinking a margarita while eating a breakfast burrito.) Chris continues to try to backpedal, while Tia proves that she’s good at math and subtracts herself from the equation. Krystal is sad and broken (and I’d like to point out that she’s now on voice #7 of Paradise) but counselor Bibiana puts her back together again.

We get our first arrival of the day, Jacqueline. I know what you’re thinking, WHO DAT? She’s from Arie’s season and pretty much looks like Daria from MTV if she was actually cool. She comes in, and surprise surprise, she wants Colton. (Are virgins the new thing now?? What am I doing wrong??) Jacqueline asks Colton on a date and he says, “I think you’re great and all…but if I leave here with another girl, Tia is going to cut my nuts off. I mean I know I’m not actively using them, but I’d still love to have them.”

Jacqueline takes the rejection pretty well, and doesn’t even blush in embarrassment. (Believe me, we’d know if she did, because she has the complexion of a tan ghost.) While all this is happening, Tia is having a breakdown as she just knows that Colton is going on this date. But like a parent with their 2-year-old on a leash, he ain’t going NOWHERE. Jacqueline randomly slides up next to Kenny (as Annaliese prepares to pounce on him) and asks him on a date. Annaliese begins to tailspin, as she wants love BADLY. At this point, her standards match mine in kindergarten. I was just looking for a girl that would get me an apple juice and lay next to me during nap time.

Jacqueline and Kenny’s date was as uninspired as you might think it’d be. The conversation resembled one you’d have with a stranger while you’re waiting for the barista to draw the heart in your macchiato. Sparks did fly, but only because they were in the form of fireworks in the sky. Back in Paradise, Annaliese is waiting up for Kenny like my mom did when she found that condom in my backpack. (They gave them out in health class. That’s my story, and I’m sticking to it.) Annaliese makes Kenny some sort of pink sorbet to show her affection, but what she’s really showing is that her cooking skills leave much to be desired.

The awkwardness of Caroline continues, and it’s almost hard to watch. Jubilee continues to see what she wants in John and goes after it, while Caroline just sulks in the bleachers. Caroline finally takes John into the water and tells him: “I thought about you today,” and he replies with the same comment. At this point, I was praying for a commercial just so the awkwardness would end, but she does save the convo by stealing a kiss.

ROSE CEREMONY TIME!!! Outfits are normal except Jordan’s, which resembles something Wilma Flinstone would wear. I love that he wore this, as it takes away from the IHOP kid’s menu that’s been wrapped around Chris’ head all of paradise. Guys have the power this week, so girls with no roses on lock are scrambling. Bibiana tries to get her some Kenny, but Annaliese literally put up a fight during her and Kenny’s wrestling match. Caroline and Jubilee try to fight over playboy John, and I think there are several moments where he has to remind himself, “I’m an Engineer…life won’t always be like this.” David gives Jenna a huge stuffed dog and Jordan proves that not all dogs go to heaven, as he tossed it in the ocean. Jordan gets irritated, curses at girls in the process, and realizes having 13 girls mad at you is the last thing you want when you’re going to need to borrow some of their hair care products, so he later apologizes.

Rose ceremony shakes out as such: Jordan to Jenna, David to Chelsea, Kevin to Astrid, Chris to Krystal, John to Jubilee, Joe to Kendall, Colton to Tia, Eric to Angela, and Kenny to Annaliese. Meaning we lose Nysha, Caroline, Jacqueline, and our spicy Latina Bibiana. ABC, with Bibiana leaving, I guess you can put those black boxes away for a little bit.

Episode 5 starts with Krystal attempting to put some weed-scented Febreze on the situation to freshen it up. Leo comes in, and everybody starts sizing him up immediately. Guys say they’re not bothered, but girls are hot AND bothered.  Leo ends up asking Kendall on the date, and she says yes immediately. In true Chicago fashion, Joe says, “I hope you have a bad time. See you later.”

They go on the date, where they run into Jorge (who is singlehandedly contributing to the skyrocketing unemployment rate in Mexico since he has EVERYONE’S job). Here, we see the worst “story” ever that features Arie, Amanda Stanton, Lauren B. & Ben Higgins. At this point in the episode, I envied Stevie Wonder because he doesn’t have to see this. Kendall and Leo spend most of their date making out in front of a camera, and no one hates it (except Joe). Kendall returns from their date, and Joe pretty much says, “Leo who?” whereas Kendal is more like, “Umm, don’t close yourself off from everyone.” (Translation: Make sure your sh*t is ALL the way packed). Leo doesn’t stop at Kendall—he grabs some makeout time in the hot tub with Chelsea after he returns from his date, proving that he’s the guy that cuts the buffet line to get seconds when everyone else is still on firsts.

Just when it had been 12 minutes of uninterrupted time with no Tia and Colton discussion, Kenny finds a date card for Colton. He takes Tia on their first REAL date, and it features BIP Season 4’s star couple Adam and Raven. During the date, Raven drops some knowledge on her that makes Tia cry like someone told her that there was a tequila shortage. As a result, Colton decides to put a figurative ring on it, by making her his girlfriend.

A new arrival, Benoit, shows up and he is something else. He’s got the kind of eye contact that makes eye exam charts jealous. He takes Jenna on a date, and they have some great conversation. And by conversation, I mean tonsil hockey lessons. By the end of the date, Benoit was wearing more of Jenna’s lipstick than she was. Jordan is sitting back at the resort stewing over this date. He decides to write “I’m Sorry” in the sand so big that the people on Mars are wondering how bad he f*cked up. Is the sorry for the immaturity or the fact that he stole one of Ellen’s jumpsuits for the rose ceremony? We’ll see next week!