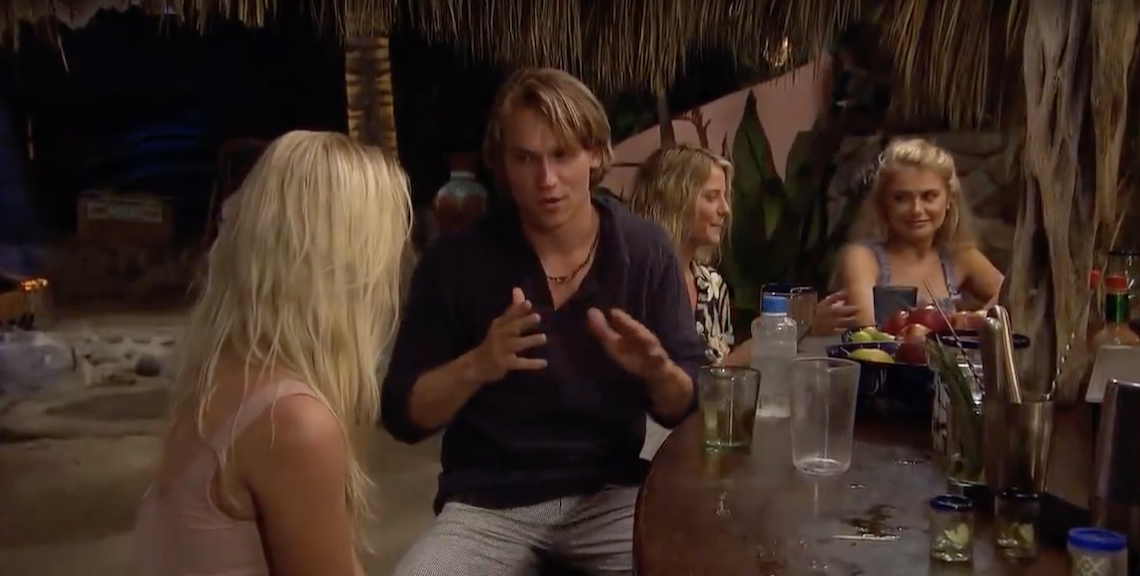 The Best ‘Bachelor in Paradise’ Recap You’ll Ever Read: JPJ Is Officially On Our Sh*t List

Welcome back to the best Bachelor in Paradise recap you’ll ever read! For those of you who thought ABC would give us a brief reprieve from the grueling four-hour-a-week schedule of this godforsaken show just because of a little thing like a national holiday, well think again bitch! If there’s one thing I know about the good people over at ABC, it’s that they do their best work when their audience is more sleep deprived and sunburnt than the contestants. In fact, I am force-feeding myself wine as we speak, even though I’ve spent the last 72 hours guzzling White Claw and now the mere smell of alcohol sends a cold chill down my spine. But ya know, how else are we to tolerate Nicole’s sad desperation? Onward!

Last week, Krystal and The Goose got married, Dean dumped Caelynn for his van, Angela and Clay had a moment, and we found out that John Paul Jones, like, hates our podcast or something. Which brings us to this week: we open with Nicole telling the cameras that dating a man for three weeks has changed her entire outlook on life. That is a bold statement considering the most personal thing she knows about Clay is how many reps he can do with her sitting on his back while drinking a margarita.

Cue Angela walking into Paradise. Angela gets a date card and it basically says: “Angela, get ready to throw a grenade on the scraps of happiness your ex has happened to find here.” Chris Harrison, you petty bastard.

I love that Clay is so appalled that the producers would do this to him. He’s like, “why would Angela just show up when she knows I’m here and dating other people?” Like, dude, the producers were literally rubbing their hands together and cackling when they thought of this plotline. Of course they did this to you!! You’re lucky they didn’t also ruin your credit score and make Angela start a rumor about you having herpes.

Nicole declares that she is ready to fight for this relationship and that Clay is her boyfriend and that Angela weighs one pound. Look, these are things I mumble to myself about Tyler C and Gigi Hadid every time TMZ sends me an update about their relationship, but that doesn’t make those true statements, Nicole!! She goes to confront Angela, and guys, if the only fights we see this season are over a piñata and Clay I’m officially hanging myself.

No one is more upset about the potential breakup of Nicole and Clay’s relationship than Tayshia. It’s almost as if she’s focusing all of her energy on another person’s relationship so she doesn’t have to choose between an age-appropriate, decent guy with whom she could have a real connection, and a guy with really nice hair.

Tayshia goes “I’m praying for them to work out” and it’s like, really? Out of all the things in this broken world, this is what you pray for, Tayshia?

Angela chooses Mike for her date and this choice feels specifically calculated to make Clay drown himself in the ocean. I’m so proud of you, Ang!!

They go on their date and Mike is GRILLING her about Clay. He’s like “did Clay shatter your heart? Are you still emotionally devastated? Did you know he didn’t even really love you?” MIKE. This is not how you woo a lady! This is how you get a lady to set fire to everything a man knows and loves, mmkay? The fragile state of her emotions seems to be working for Mike, though, because they immediately start making out.

Moving on to our other love triangle of the evening: Hot Twin, JPJ, and Tayshia. Hot Twin declares that she has a massive crush on JPJ, and now that makes two women who have used the words “intelligence” and “John Paul Jones” in the same sentence. I’m officially concerned.

JPJ calls Derek an overgrown frat boy, and that feels a little like the beer calling the pong table black. I mean JPJ has been mimicking Keanu Reeves’ voice from Point Break the entire time he’s been on screen, but somehow Derek is the fraud??

HOT TWIN: I thought we had an instant connection?
JPJ: We did! Of course we did. I just never expected you…to be funny or very smart, you know?

And this is the master wordsmith sweeping ladies off their feet all over Mexico??

Hot Twin keeps saying how she doesn’t get the whole “Tayshia thing” but I feel like she’s really trying to say “I don’t get why he likes her now that I’m here.” I see what she means though. If a former Vegas shot girl can’t find a man to give her a few beautiful weeks on a Mexican beach and a possible UTI afterwards, then what hope is there for the rest of us?? Then again, she is down one twin. Perhaps they aren’t as powerful apart as they are when they’re together.

JPJ tells Hot Twin that Derek never should have meddled in their business and that he’s just manipulating Tayshia, and this is truly rich as he’s telling all of this to the girl he himself is manipulating. Okay, I am LIVING for Demi’s reactions in the corner. Her face is screaming “thank god I don’t date men anymore.”

HOT TWIN: I thought I’d have a good time here but I’d rather be home with my dogs.

I’D RATHER BE HOME WITH MY DOGS. HAHAHAHA. I’ve had that exact thought while online dating, followed quickly by, “if he asks me to add him on Snapchat again I will be suicidal.”

JPJ tells Hot Twin not to put her emotions or feelings on him, even though his actions directly caused her to feel this way. He sends her off with a “be a big girl” and a brisk pat on the back, and if I were him I would sleep with one eye open from now on. Or else he might wake up floating on his mattress in the ocean somewhere off the coast of Mexico…

Hot Twin asks Blake why men are always such pieces of sh*t and Blake looks as if he’s wondering if now is a good time to try and sleep with her.

Meanwhile, Wells is like “do you think that went well? Because from here it looked like a train wreck.” Wells is not wrong here. JPJ insists that it did, indeed, go pretty good, and I swear I saw Wells pretend to zip his lips and then go back to skeptically shaking his 500th skinny margarita of the summer.

To make matters worse, Derek tries to reignite his feud with JPJ by asking if he can “talk things out” with him. Okay, I feel like the producers must have put Derek up to this, because why else would he bring this sh*t up AGAIN?

JPJ accuses Derek once again of using his fame to sleep with women on social media and it’s like, are there receipts to back up this claim or…? Because I need to see more evidence. As someone who has slid into his DMs a time or six, I know from experience that he doesn’t answer every girl’s DMs so…

As they continue to bicker, the camera cuts to Tayshia, who looks like she would rather sleep with a sea urchin at this point than either one of them. I’m sure when she pictured her time on Paradise, she envisioned making out in a hot tub or sensual massages, but probably not being the center point of a fight where one man maniacally laughs and the other defends his podcast. Tough break, kid!

Old Matt Donald and Luke S. show up in Paradise next, and the producers give them a double date because they had to tighten the budget somewhere, so it might as well be for these two. The single ladies perk up at the thought of fresh meat on the island. Hot Twin is convinced that Old Matt Donald will be into her and Tayshia is just looking for someone to help smuggle her out of Mexico at this point before either of her suitors notice. Much to their dismay, they ask Kristina and Sydney out instead.

They shouldn’t feel too upset about their misfortune, because the foursome are set loose at a Mexican restaurant. I know, I know. Mexican in Mexico? Groundbreaking. For their date they’re forced to drink spicy margaritas, which appear to be less spicy and more just straight up poisonous. I love when production tortures the contestants under the guise of them “deepening connections.” It truly sparks joy in me.

Okay, the margaritas are certainly the only thing spicy about this date. Kristina is practically in the splash zone with how sweaty Luke S is and Old Matt Donald is acting like he’s never gotten within three feet of a woman before. He’s like “I want to kiss Sydney but also I have to think about my mother.”

If you think a chaste kiss after dinner is bad, then just wait until production catches you three margs deep, straddling a stranger on a daybed! There’s always more room to bring dishonor to your family on this beach.

JPJ pulls Tayshia aside and tells her he feels “dis-ease” about their relationship, and then starts crying hysterically. That’s the Harvard-level intelligence at work right there, ladies!!

While Tayshia doesn’t seem to know how she feels about JPJ, she does know that she’s not into Derek anymore, and so she breaks up with him. She’s like “I thought that I was into you but then I thought nah.” So eloquent with her words! Look at that, folks, we’ve got another poet in the house!!

After getting dumped, Derek heads solemnly over to the bar and asks everyone to please gather close as he has some bad news to share. Okay Derek, you don’t have cancer, you just have a personality that is unattractive to women. Must we get this dramatic? Wave goodbye and get on your complimentary flight home for Christ’s sake.

And that’s all for tonight, folks! See you tomorrow for night two of this hellscape disguised as a reality TV show.