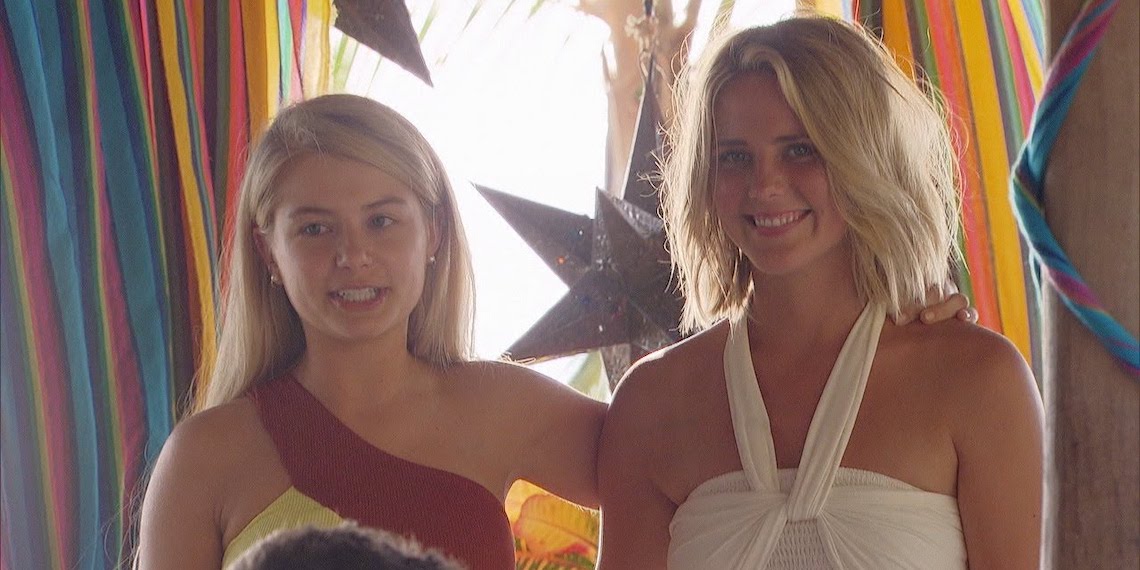 The Best ‘Bachelor In Paradise’ Recap You’ll Ever Read: Yet Another Kristian Shows Up

Hello, Bachelor Nation! We have made it to night two, and for that we are rewarded with nothing except two hours of our lives being stripped away to watch Blake complain how he hasn’t gotten his dick wet yet this whole time. Sighs. So let’s dive right in! If I’m remembering correctly through the wine haze, last night a piñata got two men kicked off the show, Clay won Nicole by default, Hannah half-heartedly picked Dylan over Blake, and Demi continued to talk about how conflicted she is over her feelings.

We open on Demi requesting an audience with Chris Harrison. He comes to her, naturally, because we all know she’s really in charge here. I’m surprised he isn’t required to bow to her.

Demi comes clean to Chris and tells him that she’s been seeing a woman named Kristian back home. Chris pretends to sit there thoughtfully, but is wondering if Demi is really confessing her love to him, and using a fake, but similar, name. Demi continues to get a free therapy session out of Chris, as she tells him that she thought the closer she got to Derek, the more she would be over Kristian, but that’s not what happened. Chris nods his head and, again, pretends to sit there thoughtfully, as he actually mentally calculates how much overtime he is getting for this. Chris tells Demi he supports her no matter what, and then scampers off to collect his check.

Demi continues to be conflicted, and I honestly don’t know what else I can say about except to literally quote myself from the last two weeks?

How about this one: “Everyone keeps saying that Demi and Derek are this perfect couple, but apparently she isn’t sure how she is feeling about him. Demi is stressing about telling him that she had been dating a woman back home…”

Or this one: “During the cocktail party, Demi pulls Derek aside because she wants to explain what’s up with her. She tells him that the reason she has been evading his questions is because she has been casually dating a woman and she has been worried about it…”

I’ve even bored myself. Can we sh*t or get off the pot here? Bring me Kristian!

Back at the bar, Wells asks Blake how he feels about Caitlin.

Ladies, the single men of America! This is what we have left for us! You’re a gorgeous girl with a GREAT name, giving a f*ckboy who cries too much and has an unhealthy attachment to his mother the time of day, and when HE is asked about YOU all he can do is muster up a shrug. Shall we make the suicide pact now?

Kristina steals Blake, and this is where I have to say I hate Kristina. She says she gave Blake her rose to torment him, but then she continues to pursue him, and still claims it’s all to ruin his life. Honey, you are not an evil mastermind. An evil mastermind is someone who put real creamer in the almond milk creamer just to watch Kathy in HR run to the bathroom every morning at 10:05. Should’ve approved my PTO days, bitch. Until then, we all know you still want him.

Oh boy. Just when I was beginning to be a fan of the way Caitlin was handling herself with Kristina she has to go and say “Women should respect women.” Nooooooooooo! They are fighting over a MAN and she’s trying to pull the female empowerment card? And not even a good man like Keanu Reeves, we’re talking about pond scum. Save the “women respect women” thing for when you want your mom to cover your credit card bill, Caitlin.

Elsewhere, Katie and Chris are having an awkward conversation about new girls coming in, and she says “do whatever you want to do.” Chris says “really” and the answer is “obviously not you f*cking moron” but Katie just says, “yeah.” And this, my friends, is what we in the biz call foreshadowing.

In walks Jen Saviano, who Dean claims is one of the most attractive women ever, and I hate to burst his bubble and tell him she was created in a plastic surgeon’s wet dream, but here I am! Bursting bubbles!

Caelynn tells us that Blake was talking to Jen while he was ghosting her because of course he was. Is there anyone on planet earth that Blake was not DMing? Like, I’m about to check with my Mom right now.

Katie is freaking out that she told Chris to go on whatever dates he wants, as she should, because he just said yes to a date with Jen.

Chris pulls Katie aside to tell her that he’s going on the date because “he would have liked her to have said she would cut off her arm for him.” That’s the kind of drama I’m looking for in a relationship too, Chris! Cut off your arm for me! Give me a vial of your blood for around my neck! Let me keep you in a box under my bed! I’m in. Call me.

Chris and Jen go on a boat, and he is “applying sunscreen,” and I’m nervous for her next skin cancer screening because this seems more like a sensual massage, and you really need to be vigilant with these things.

The date basically ends there, because for some reason there was no night portion to this date. Chris decides to make up for the puking and plan a date when they get back home. He walks in and doesn’t even look at Katie. Dun dun dun.

Okay so the part of the date that Chris “planned” is laying on a bed and drinking champagne that I’m sure someone else uncorked. Such a sweet effort! I hope it also involved some teeth brushing because that’s all I can think about during this close-talking sesh.

Chris says that he thinks Jen is witty and has great one liners and then she says “why don’t we get in some calm waters” in reference to the hot tub, so I’m wondering if that’s what he meant by witty? Because if those are his standards for funny than you can call me Robin F*cking Williams.

Chris and Jen make out in the calm waters and I’m still wondering about the teeth brushing, and I’m sure I’m not the only one. Production, give the people what we want! Show us the dental hygiene scene! Is that toothbrush electric, or manual?!

We cut to the beach where Nicole has composed a song for Clay.

NICOLE: I want you in my tummy
ME:

Chris takes Katie aside to tell her about the date. Katie tells him she was basically self-sabotaging when she said he could go on a date, and that she only wants to be with him. I think. I can barely hear anything over the sound of the waves. Did they blow their sound budget on Chris Harrison’s personal masseuse again?

Oh guys, update. Apparently Sydney and Mike are still there. I swear, vomit has gotten more screen time than they have.

Derek continues to talk about his trouble with Demi, and can someone PLEASE put me out of my misery and have this mysterious Kristian show up already? I only like this much talking about something if it’s me bitching about my coworkers.

Chris Harrison shows up to see Demi and she gives him a big hug, and I just get the feeling she’s sneaking into his room at night for some AC, chick flicks, and good old fashioned gossip. She’s clearly the favorite. Be on the lookout for matching pajamas.

Chris tells Demi that they’ve done something to help her make her decision. He points upstairs and there is Kristian, I presume. Demi cries and hugs and kisses her, and I would like to do the same because something is finally HAPPENING.

Demi fills Kristian in on her relationship with Derek, and Kristian seems upset they hooked up. I’m confused about where she thought Demi was going? Even my grandma knows everyone goes to Paradise to bang, and she gets spoon-fed jello for dinner every night. Demi tells Kristian that the second that she saw her in Paradise she knew that she wanted to be with her. Poor Derek. He never even had a chance.

Demi pulls Derek aside to rip his heart out on an air mattress that was haphazardly thrown on the sand. She tells him that Kristian is here now and that when she got here, she knew her heart was with Kristian. AND OMG. They are not making Demi go home?!!?!?!? She is pursuing her relationship with Kristian here!

How I imagine this idea came to be behind the scenes:

And so it was.

Derek is sad. It’s okay Derek. It’s Britney, Betch’s DM is still festering in your inbox if you would like attention from a new tiny blonde, but with a worse attitude.

Now that Derek is alone, he’s crying about how everyone says he’s a great guy, and why won’t anyone ever love him, and the same thing happens to him every time. Oh for f*ck’s sake Derek, this is not my therapists office. And even if it was, Diane wouldn’t stand for this amount of self pity. Buck up, walk into any bar in America as the tall, handsome man you are (who still has all his hair), and find a girl to take home. You’ll be fine. K? Good talk.

Derek and Kristian meet and are both very nice to each other, because I guess they saw last night what happens when you fight on this show. Sad that a piñata inspired more rage and passion in two people than Demi did, but what can you do? Those things are filled with candy.

Demi brings Kristian to meet everyone. Blake is confused because he has never seen this woman before, and he didn’t have the chance to DM her before she got there! He’s calling up his Mommy to cry about it as we speak. It’s not fair!

Demi explains who Kristian is and says they’re staying in Paradise together. Everyone is happy for them, and boy are they going to ruin you, Kristian. Behind the scenes, Hannah is crying over Demi and Kristian’s true love, mustering up more emotion for a woman she met this afternoon than she has this whole season for the man that would sell his kidney on the black market to get salami for her charcuterie board.

Demi and Kristian immediately get a date card because in his past life, Chris Harrison was a sociopath who enjoyed manipulating the pain of other human beings for his own pleasure. Or in this life. Sorry, Derek!

Kristian tells Demi she could never go through something like this again and Demi tells her that she wants to do whatever she needs to do to be with Kristian. They say they love each other. And it would all be so sweet if I could hear any sort of passion through Kristian’s relentless monotone.

And that’s all, friends! I’ll see you next week for some more grown man tears and vomit!