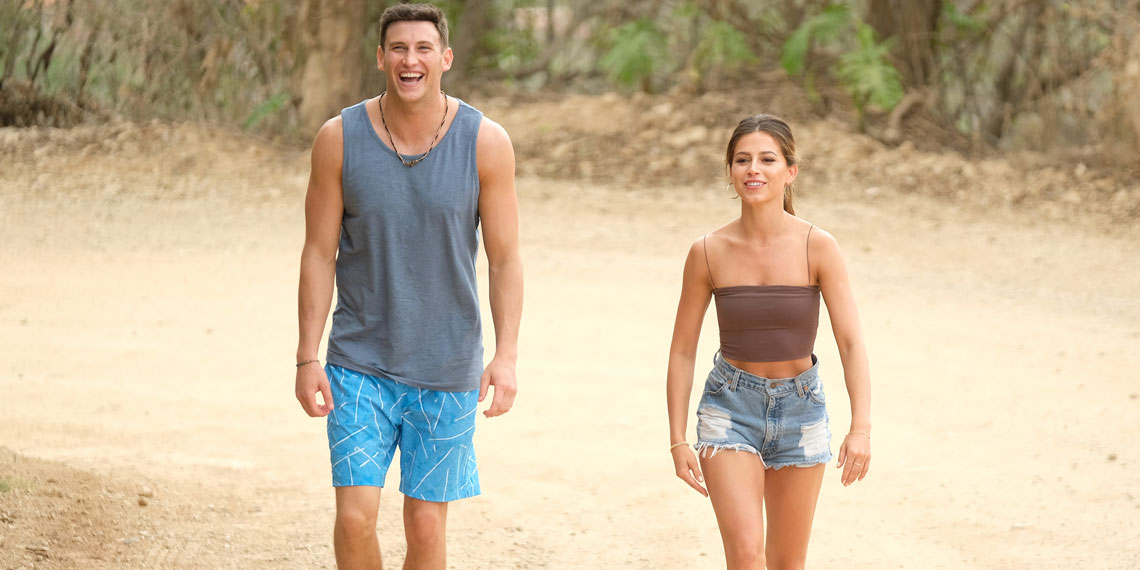 Welcome to the Bachelor in Paradise, week one, night two recap! It’s Britney, Betch and I are tag teaming these recaps this season because there are only so many ways one person can say “just burn it all to the ground” before they get put on suicide watch. Plus, we are each only happy if the other is submitted to the same torture in life. It’s a beautiful friendship, isn’t it? So, let’s get started!

Previously on BiP, Hannah G made out with Dylan to pass the time, Blake took Tayshia on a date and then Kristina showed up and immediately asked him on a date, and Caelynn was one margarita away from pulling a 2007 Britney Spears and shaving her head in the ladies’ communal bathroom.

On the beach, everyone is sitting around talking about how Blake is the “it guy” of Paradise, and how he’s such a hot commodity. Wills rolls his eyes, and so I guess he is the on-camera surrogate for the audience this season.

THIS GUY?! Really? THIS GUY?

Blake pulls Tayshia away from the group to clear the air because Kristina asked him to go on a date that day. He basically tells her he had a great time last night but given the chance he’s totally going to f*ck Kristina today. So sweet!

Meanwhile, Caelynn continues to be horrified that the mediocre white man who ghosted her is somehow still popular with the ladies. Duh! Welcome to the real world, Caelynn! I’ve been ghosted so much my whole phone just went up in a puff of smoke.

Blake and Kristina go four-wheeling on their date, because the producers love to give scorned women weapons. Personally, I prefer a knife for a more personal murder experience, but I guess this will do in a pinch.

After Kristina somehow does NOT crash the passenger side of the four-wheeler into a tree, they head to a random seating area where she tells Blake that he walked all over her, but that Paradise is about second chances, so she’d like to give him a chance to walk all over her again. Poor Kristina! When will she learn? Her fellow Russian orphans would be so disappointed in her.

Blake attempts to explain himself by telling Kristina that he and Caelynn “took it too far” but they “both agreed” that sleeping together was a mistake. Hmmm, Caelynn’s fragile mental state says otherwise. He is also pissed that Kristina dare question the actions of him, a single man, because obviously only women should be called out for sleeping with multiple partners!! Doesn’t she know this?!

Okay, at this point I’m just so confused. Why did Kristina waste a date card to confront Blake? She could have just roasted him on the beach in front of everyone and it would have been way better. Or she could have just put Nair in his hair gel! Food dye in his sunscreen! Antifreeze in his cocktail! So many better ways to get even!

As Blake and Kristina return from their nightmare of a date, Caelynn, powered by sheer hatred, heat stroke, and 20 vodka sodas, takes this opportunity to pull Blake aside.

Caelynn is unraveling by the hair extensions as she calls him out for saying they were a mistake. She says that she feels like a disgusting secret that he is ashamed of, and that she just can’t keep his secret any longer, neglecting to mention that she has already blabbed about it to everyone in the house: Wells the bartender, the local wildlife, and a coconut, which in her defense really looked like Hannah’s head!

Blake is distraught. He is in tears. He just wanted to come to the beach, sleep with the women on the show that didn’t answer his DM’s, and now they are all running around calling him names! He’s telling his Mommy on them!!!!

Demi calls Blake a loser and THIS IS WHAT I HAVE BEEN SAYING, PEOPLE. It’s the haircut. Well, that and the man whoring, of course.

Blake is lamenting that he “looks so bad, man”, and yes Blake, that’s what happens when you do bad things. You look bad. Because you are bad. He also cries that nobody will be into him now and it’s like my GOD Blake, we’re being a little dramatic, aren’t we? I reserve phrases like that for that one time I dyed my hair black thinking I would look like Megan Fox and instead looked like a drowned raccoon. Besides, there’s no need to look so glum. Annaliese will probably still have you!

We wake up on the third day of Paradise, and miraculously God has not yet struck down this sinful little beach town. Demi sums everything up for us. She and Derek are hanging out. Hannah is killing time until someone hotter comes along with Dylan, and everyone is gossiping about the Caelynn/Blake drama.

Wills grabs Hannah and chats her up. Hannah says she is making an effort to be open in Paradise and I am guessing that means with her legs, because the only thing I’ve heard her say thus far is that her favorite food is charcuterie boards and I don’t even believe her. They make out, so that confirms my suspicions about what “open” means.

Dylan tells Hannah he can’t see himself with anyone else, and she looks very worried because she is totally going to bang other people. She tells Dylan that Wills kissed her and he dies a little inside, but with a smile on his face. What a guy!

We turn to the beach where everyone is watching Clay work out. Nicole is openly drooling, and JPJ is pouting at Clay’s perfect physique, but then he stares at his own reflection in the camera, and whispers, “no, you’re the fairest one of all.” He’ll be okay.

Ooooh Bibi also has a crush on Clay. I love her because I identify with her, and I just want her to be happy. Clay tells her she is hot multiple times, but then is all over Nicole. Bibi and I don’t like this. Just as Clay and Nicole are about to get cozy, Demi cock blocks him with a date card. Clay asks Nicole on the date and Bibi is devastated. What is wrong with us? Why won’t anyone love us! Errrr I mean… what is wrong with HER, why won’t anyone love HER?!

Bibi: Clay already gets me SO much that’s why he didn’t ask me on this date

Back at the bar, Annaliese is gossiping with Chris and Cam (two of my predictions for her!) and claims that Clay recently saw Angela and she doesn’t believe it’s over. She confronts Clay and she is in tears, and it’s like chill Annaliese, he’s not going to make you get in a bumper car, just calm down. The discussion goes like this:

Annaliese: You aren’t here for the right reasons
Clay: What reasons am I here for?
Annaliese: You suck at football, no one would pick you up, and now you need a new income stream.

Wow. Did she hit the nail on the head or what?

Clay and Nicole go to a carnival on their date. Nicole rides a mechanical bull, and Clay tells Nicole that he is over his relationship with Angela. I am exhausted by this Angela business. She has gotten more airtime on this season THAT SHE DOES NOT EVEN APPEAR ON than she ever did on any other season of The Bachelor.

In case you forgot what she looks like because I sure did:

Guys, I can’t with Blake’s crocodile tears, saying “I’m going to have to go into hiding,” and “I can’t imagine what people will think of me.” Okay dude, you aren’t Osama bin Laden you are literally just a 30-year-old f*ckboy who needs a new to find a new barber. It will be fine.

We have made it to the first cocktail party of the season, aka the part where we find out who is desperate enough to make out with Cam.

I love that Demi has become the narrator of this episode, can she get some of that Chris Harrison bread?

And ding, ding, ding we have a winner!!! It looks like Caelynn is the one desperate enough for Cam’s rose. They make out. And she says the more she gets to know him, the more she likes him. That sounds like a lie. Something tells me Cam will be very disappointed next week when the women have the roses…

Jane decides to shoot her shot with JPJ and does it with leftover tacos she found sitting out in the kitchen. Finally, someone speaking my love language! Unfortunately, JPJ immediately starts throwing up in the sand and I’m having horrific flashbacks to Spring Break ‘09 in Panama City Beach. That was totally food poisoning too, Mom!

Jane claims she’s not trying to kill him, but that’s what every murderer on SVU says. I can’t imagine what could be in a taco that would immediately cause someone to puke but I guess that skim milk of a man just can’t handle the spice.

Annaliese and Chris are making out and they are doing a cheesy doctor thing and I wish I was dead.

Chris: I need a prescription for three more kisses
Me:

Back at the bar, Bibi is crying because no one loves her, and I don’t know what that feels like at all because that totally wasn’t me at my younger brother’s wedding this weekend, I don’t know what you’re talking about.

Hannah tells Wills that she doesn’t want to waste his rose tonight and that her heart is tugging in another direction. Wills, I know you are feeling sad right now, but just help yourself to one of those edibles a producer snuck onto the plane for you and it will all be better soon, sweetie!

Blake then pulls Hannah aside because they “have something special.” So basically she’s the last woman on earth who won’t spit on his grave? Hannah is into it because she is trying to be “open.” Enough with that word open! If I hear it again I am going to take this bottle of wine to the face (kidding, it’s already gone). Also, it’s nice to be open but my God Hannah, Dylan is way cuter and Blake probably has VD.

Hannah tells Dylan that she made out with Blake, and poor Dylan has now basically swapped spit with half the dudes in Paradise and we’re only a few days into this dumpster fire. Another piece of him dies. Soon there will be nothing left of sweet Dylan.

He then goes to seek advice at the bar, and I love that they all take wisdom from Wells as if he is a mental health counselor, or a priest, or their mom, but really he is just a fake bartender forced to be on this show to pay off an engagement ring that he spent way too much money on.

And that’s all folks! We are four godforsaken hours into this show and we still have not gotten a rose ceremony and Chris Harrison has only been on camera for 45 seconds. Tune in next week to see who gets a rose and who has enough self-respect to just send themselves home. Until then!