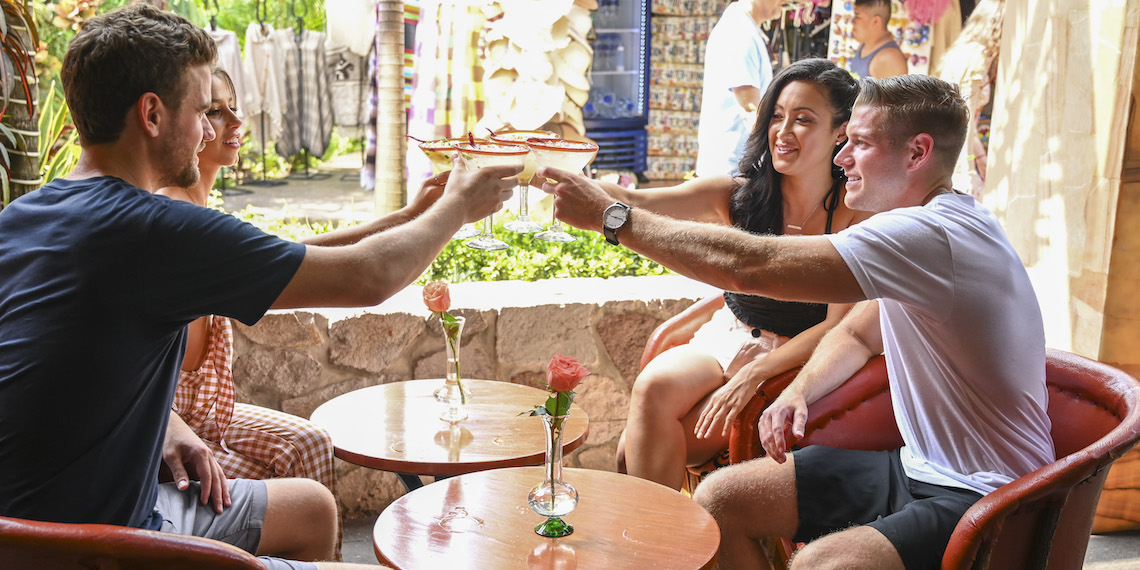 The Best ‘Bachelor In Paradise’ Recap You’ll Ever Read: Dean’s Got The Van Running

Hello, Bachelor Nation! I think we’re in the bad place. We all survived a long weekend of drinking and debauchery only to be rewarded with writing a recap of a show where people are snotting out their spicy margaritas. Just me? Fine, you enjoy, I’ll suffer. Shall we get on with it?

Last night on Bachelor in Paradise, Derek eliminated himself because no one will ever love him wahhh wahhh wahhh, Old Matt Donald and Nick Viall’s pre-plastic surgery doppelganger showed up, and JPJ cried over Tayshia.

It’s the morning and Blake shows up to the bar, super confused that Derek left. Where were you when Papa gathered all the kiddies around his knee to tell them his bad news, Blake? Stealing a producer’s phone to DM future Bachelor contestants?

Blake tells us that he feels like he’s “burned” bridges with every woman here. Those quotes were his own. I do not think Blake knows how to use air quotes. I’ll be adding this to the list of grievances I have on him. We’re on to page two.

JPJ is still distressed about Tayshia and is seeking counseling from everyone. Chris B is not a therapist just because he’s old, John! This is a man who competed on the god-forsaken Bachelor Pad. I’m not even confident he has a high school education. Do not trust him!

Chris and Katie are talking about taking their relationship to the next level, and good for them, but I totally forgot they were a thing. But why is he dressed like Huckleberry Finn?

JPJ decides it’s time to talk to Tayshia after everything that happened between them. She says she needs him to trust her and not to question her, and he agrees and is this what it looks like when someone is hypnotized? Because JPJ seems very out of it. Tayshia also tells the audience that she can’t see him long-term. So I guess she just wanted to hypnotize him into sleeping with her, and then keep a lock of his hair in her memory box to sniff and reminisce when she’s old and gray.

Guys, Clay is in his feelings about Angela. He says that it’s hard for him to watch his ex hanging out with other men, but that he doesn’t have feelings for her anymore. His face tells a different story.

Chase from JoJo’s season shows up. I guess he wasn’t able to find love on the countless other reality shows he’s frequented since JoJo dumped his ass. He claims he’s into Angela, they had a good time at the wedding, and he’d like to get to know her better. Does this actually happen? Because anyone I’ve ever had a good time at a wedding with seems to have joined witness protection.

Chase gets a date card and immediately invites Angela. Clay throws up in his mouth, chokes it down, and claims he’s totally not jealous! He seems very stressed about the idea that he has to continue to see his ex dating, and says he didn’t sign up for this. I would say you should learn to read your contract a little closer, sweetie, because I’m pretty sure ABC puts “we live to f*ck up your life” over and over in the fine print.

Okay Clay is OBSESSED with Angela. He continues to talk about her. If I have to hear her name out of his mouth one more time I swear I’m shutting this TV off right now! And then turning it directly back on because I’m sure you all would burn me at the stake for missing this recap! But I would turn it off for a second! And then rewind the parts I missed! I’m so mad!

On their date, Chase asks Angela how she feels about her “ex on the beach” right now and he’s definitely confused about what show he’s on. Chase, honey, you WERE on Ex on the Beach, a show so atrocious not even me, queen of garbage, could make it through a season. THIS is Bachelor in Paradise. Work the correct name into casual conversation, or stop going on trashy reality dating shows. Your choice.

Blake is contemplating life, love, and what his mom is doing right now, when it dawns on him that he wants to be with Kristina. He says they’ve never been all in on each other, which must feel real nice for Kristina coming from a guy she f*cked, but that he wants to give it a try now. She asks him if they can continue this conversation tomorrow to see if he still feels this way, and by that I assume she means to see if he sleeps with Caelynn tonight.

Oh we’re headed to a rose ceremony. I forgot what these were like. Oh, Chris Harrison. I forgot what he was like. Oh yes, he’s a sassy b*tch, love you Chris!

Sydney asks Matt if he likes her and if he wants to kiss her.

Okay Matt, it’s cute that you’re shy, but this is a dating show! Someone get this man 11 tequila shots. Wells?! Where you at?

Oh GOD, now even Chris has to give Matt a talking to. So last season he was forced to explain to Colton which hole it goes in, and now he has to coax a grown man into using a little tongue. I imagine Chris just walks around mumbling “I’m too old for this sh*t” all day long.

JPJ is giving Matt Donald the most action he’s seen on this show when he towels him down to get all the sweat off him. Once Matt is fully dried off, he heads over to Sydney to give us the cringiest makeout scene of all time. I watched it through my fingers and that was still too much of this.

“My mom is going to kill me.” I’m sorry, but doesn’t his mom know what this show is? Just because she’s deaf doesn’t mean she hasn’t heard about the trash that is Bachelor in Paradise, Matty. She knows you might put your tongue in someone else’s mouth. SHE KNOWS.

Clay decides to confront Angela, because he’s totally not still hung up on her, and says he wants to get things out in the open. The only thing I’m getting out of this conversation is that they disagreed on the amount of time a person should spend in the gym. I’m with Angela on this one—four hours a day is too much time for a person to spend anywhere other than on the couch binge watching old episodes of Criminal Minds. You’re a sick man, Clay.

Blake and Kristina have another serious conversation, and he asks her to give him a chance. She is skeptical because she has met him.

Oh wow, I forgot it was a rose ceremony again. I really never remember that there is a purpose to these shows other than to punish me for wishing my coworker’s children that are running around the office all day will trip on something.

The women have the roses tonight, and it goes as such:

This means Mike has to go, which is a bummer for everyone, because even though Mike calls women his “queen” and says things like “it’s beautiful you say that,” he’s a freaking catch.

The next day, Kristina and Blake are talking about their future and what’s going to happen between them. He says if a new girl walks down the stairs, he doesn’t think that anyone would go on a date. And it appears he spoke too soon, because Bri shows up and Blake looks like if he had access to a genie, he would wish he could take the last 48 hours back.

Blake asks Kristina to chat. He tells her that he did talk to Bri at the wedding, but that he turned down the date because he knows what he wants. And that’s to not have Kristina sever his genitals with her bare hands tonight.

Bri asks Matt if he would like to go on the date with her, and I think she’s going to be disappointed when she finds out what a prude he is.

Bri and Matt go surfing. Matt seems pleased with the distance these waves afford them. I think he’s hoping he’ll drown before he has to tell his mother he kissed another girl on national TV.

OH WOW. Matty has no problems getting it up for Bri! He definitely wasn’t thinking of his mom right now. Or maybe he was…

Hannah and Dylan start talking about life after Paradise.

Hannah: I can move to Cali and we can go on walks and be normal
Dylan: and we can wear cut off sweatshirts
Me:

Does Dylan remind anyone else of Tom Sandoval?

Caelynn tells Hannah that she and Connor are “going to the boom boom room” tonight. I really feel like all my trashy reality shows are being mixed into one large heap of garbage. Caelynn also says that she completely forgot about Dean, and she’s happy she didn’t end up with him. So naturally Dean’s about to come in like a wrecking ball.

Dean walks down the beach, mustache free, as if a quick shave will help redeem his awful personality. He immediately asks Caelynn if they can talk for a sec.

Oh good, he is giving Caelynn a full recap of what happened between them. Dean. This whole filming process is like nine days. She remembers. We remember.

He says he rented a car and drove to the Grand Canyon? Isn’t the point of living in your van the fact that you can drive it? In fact, you can drive it right off that cliff if you want!

Caelynn says it’s easy with Connor, and Dean says “who the f*ck wants easy?” I raise my hand alone in my apartment.

Caelynn is torn between her precious eighth grade graduate and the man who until recently had a pervy mustache and celebrates half birthdays. It’s a tough choice, I’ll give her that.

Dean says he needs to stop running from the good things in his life and he’d like to figure it out with Caelynn. He wants her to leave Paradise with him today. Why must it be today? Did he leave the van running?

Next week, Caelynn must make her very own Sophie’s Choice, and Paradise will mercifully come to an end. Can’t wait to see who pretends to get engaged!