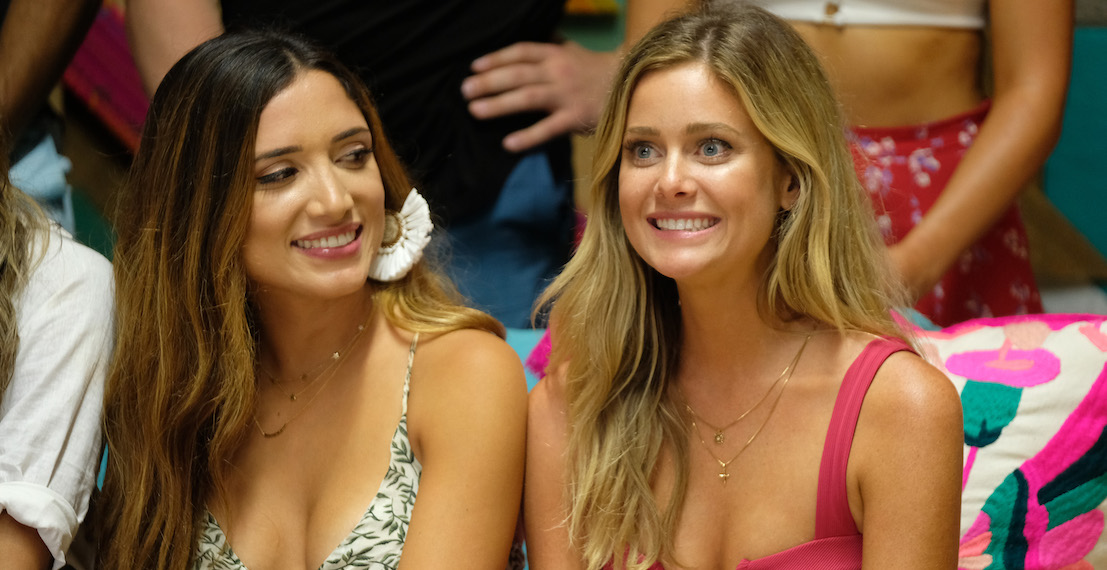 The Best ‘Bachelor in Paradise’ Recap You’ll Ever Read: What Happens At Stagecoach…

Well Bachelor fam it’s the moment we’ve been waiting for all summer. No, I’m not talking about Tyler C and Gigi Hadid finally hooking up, I’m talking about the Bachelor in Paradise season 6 premiere! For those of you who are new to Paradise, well then, welcome to this hedonistic den of sin that ABC calls a beach! Leave all your previous Bachelor franchise knowledge at the door because this show is none of that. Instead, picture spending four hours of your week watching one strand of Chlamydia pass through an entire population at an alarming rate. It’s like a fun human experiment except with less science and more tequila. Far too much tequila. So on that note, let’s dive right in shall we?

Immediately Chris Harrison welcomes us to one of “the most beautiful and exclusive beaches” in the world, and it’s a bold statement to say the least. Sure, it looks nice on the outside but, Chris, let’s not pretend like we haven’t watched grown men sh*t themselves on this beach before. We all know what a hellscape this idyllic setting really is.

We get our first look at this season’s contestants and it is…alarming. We already had a pretty good sense of who would be on the show, but watching the intros is just unsettling. It’s a little like waking up and seeing your friend drunk posted a photo of herself with her nipple half out, but instead of gently texting her to take the photo down, we have to resort to shamelessly blasting them about it on the internet. I’m sorry but I don’t make the rules, okay!!

We start off with footage from the home intros. We’ve got Tayshia, who is leaving her turtlenecks at home (SORRY NOT SORRY DAD), Katie, who packed her entire closet and a serial killer map list of who she thinks is hooking up with who, and Cam, whose rapping should be a crime punishable by death. I hope they all burn in hell.

Hannah G is the first one to arrive on the island and she’s acting like she’s never seen a beach before in her entire damn life. I love that ABC decided footage of Hannah G whispering “I’m starstruck” to an abandoned beach that’s definitely been polluted with condoms and discarded limes would give us a better sense of her personality than actually listening to her speak for two minutes. They weren’t wrong.

Cam, Mr. ABC himself, walks in and he’s dressed like Kris Jenner from season one of Keeping Up With The Kardashians.

I know people aren’t happy about him being here but his abrupt departure from Hannah’s season of The Bachelorette left me with a lot of unresolved questions. Like, does he have a peg leg, and if so, why isn’t it front and center during his journey on Paradise? Hmm?

Next, we’ve got John Paul Jones, who runs into Paradise looking like he just fled his frat’s hazing ritual. Where he hid the beer bong and the branding stick I have no idea, but my money is where it looks like he’s packing in that speedo.

Just as I’m starting to think the most dramatic thing to happen on this beach will be JPJ getting drunk and hitting on his own reflection, Caelynn rolls up, and she is ready to blow some sh*t up. For those of you who didn’t already know (for shame), apparently Caelynn and Blake used to bang. Well, I think Caelynn’s exact words were “we used to talk” but I have a feeling Blake knows more about the back of her throat than he does her favorite color, mmkay?

When Caelynn arrives in Mexico, she is shocked to learn that not only is Blake also there, but he is literally everyone’s first pick. This was a surprising revelation to me as well, as the last time I saw him on national television he was blubbering about his mommy dating his football coach and being alone forever.

Never forget where you started, Blake. I sure won’t!

As Caelynn watches the man who once told her “let’s keep it in the DMs” try to serenade any woman on the island with a pulse, she begins to unravel. First, she tells production all about their history together. It goes a little something like this: Colton set them up (strike one) and they casually dated for awhile. From Caelynn’s perspective, it seemed serious because the two of them even talked about skipping Paradise and like, exploring love off-camera (boooooo). Then Blake ghosts her (strike two).

Cut to the Stagecoach music festival a few months later, and Blake shows her five seconds of attention so she sleeps with him, only to find out THAT HE BANGED KRISTINA THE NIGHT BEFORE. Yes, that Kristina. The Kristina of the Dean-DiLo love triangle of 2017, who once said that Mexico was “worse than the Russian orphanage.” My god, has this woman not been hurt by the Bachelor franchise enough?! Sorry, Blake, but you f*cked with the wrong orphan. That’s strike one million from me. You’re canceled.

Caelynn continues to unravel one vodka cran at a time. She tells Wells all about how much Blake sucks and how we should totally just stab Blake, and Wells has the good sense to look alarmed. Wells, buddy, I know you need money to pay off that engagement ring, but at what cost??

Also, I love that when Caelynn gets sloshed at a bar and starts crying about her ex she gets validation and free drinks from her bartender, but when I do the exact same thing I get charged for an extra drink and asked to leave. WHERE IS THE JUSTICE.

Speaking of Kristina, she shows up just as Caelynn is questioning if she should just drown herself in the ocean already. Chris Harrison asks how Kristina has been doing and instead of saying “pretty good,” like a normal person would, she tells him in excruciating detail all the ways in which her and Caelynn are eskimo sisters.

CHRIS: So Blake slept with you and Caelynn? He slept with two people in less than 24 hours?
ALSO CHRIS:

You and me both, Chris!

Hannah G + Everyone: Right off the bat it seems like everyone is into Hannah, and it boggles my mind. Is she pretty? Yes, duh, I do have working eyes. But at some point someone mentions her having a “great personality,” and I’m sorry but I need to see some evidence of that. Case in point, let’s take a little look at the below exchange:

BLAKE: So what’s your favorite food?
HANNAH: Charcuterie board.

CHARCUTERIE BOARD. First of all, I call bullsh*t on this. I don’t believe this woman has eaten solid foods in years, let alone plates full of meat. Second of all, this is not an answer a real human being would give, this is an answer a robot posing as a human being would give to sound human. It’s like if someone asked me what my favorite color was and I said “tree.” You’re not fooling me, Hannah G!

Blake + Tayshia: Blake gets the first date card of the week and chooses Tayshia, despite everyone thinking he’d choose Hannah G. He does mention Hannah’s “awesome personality” (and again I must ask WHAT PERSONALITY? She’s 80 pounds of hair extensions and foundation and that’s it!!), but it’s not enough to win him over in the end and he goes with Tayshia.

Their date consists of twinkle lights and champagne in an inflatable hot tub. The whole thing screams “gringos on vacation,” but the vibe seems to be working for these two because their date ends in some light grinding in the hot tub. I’m sure Tayshia’s father will be adding a turtleneck in her care package after watching this.

Derek + Demi: I was not expecting these two to hit it off so well. I feel like Derek’s type are lithe brunettes, just based off of his past relationships with JoJo and Taylor, and his immediate infatuation with Tayshia. The fact that he’s into a short blonde now feels rude to me because he should have answered my DMs then. I don’t foresee these two lasting, as Demi is definitely going to have a relationship with a woman at some point, but for now I guess I’m rooting for these two.

Kristina + Blake: Kristina gets the second date card of the evening and chooses Blake for the date. She says it’s because she feels “familiar” with him and not at all because she has plans to wear his skin as a suit the moment she gets him alone.

KRISTINA: I’m going to make him my bitch.
ME:

And that’s it for Night #1! We’ll have to wait until tomorrow to see if Kristina is able to lure Blake to some back alley in Mexico and have her contacts from Russia “handle” him. I’m giddy with anticipation. TTYL, betches!