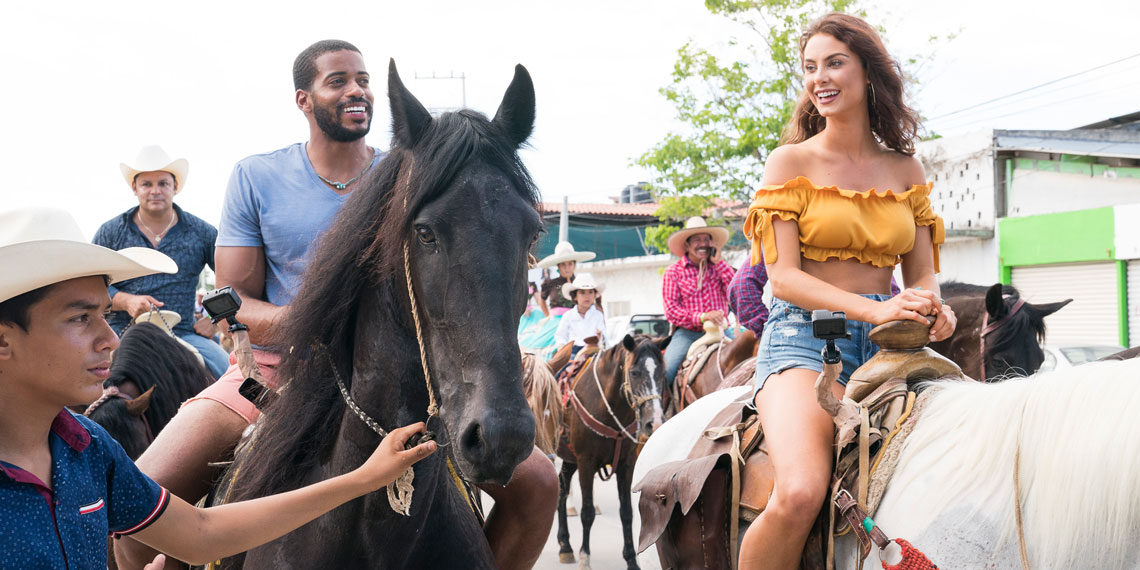 Well, fam, once again I find myself shackled to a couch for two hours watching scantily clad twentysomethings butcher the meaning of “witchcraft.” Ah, Bachelor in Paradise, it’s good to be home! I didn’t watch last night’s episode because I was busy living my life, but I did see that Colton and Tia are no longer. I guess Colton wasn’t emotionally ready for a relationship, which is why he just signed up to be in 20 relationships at the same time. Cool, cool.

ABC: Colton is the next Bachelor!
ME: I’d like to be excluded from this narrative, one that I never asked to be part of since summer 2018.

Moving on. Tonight’s episode starts off with a montage of all the happy couples and Venmo John. Seriously, HOW is this guy still here?

Astrid keeps saying that Kevin makes her feel like the most special girl in the whole world as the camera pans to a shot of them talking about salads. I’ve had a more meaningful conversation with my stapler, but okay.

Chris Harrison shows up as everyone is knee-deep in tequila shots and announces that instead of getting sh*tfaced all day they’ll have to be interviewed by former successful BiP couples: Tanner and Jade and Carly and Evan. Good going, Chris! Nothing kills a good buzz like Evan’s disgusting facial hair. Meanwhile, Kamil looks like he’d rather peel his flesh off with a blunt spoon than listen to relationship advice. Same, Kamil. Same.

They bring out the married couples who immediately start grilling everyone about their intentions. I’m sorry but, Carly, I’m pretty sure your intentions with Evan were to run as fast and as far as possible in the opposite direction. Please.

Jesus god. Every time Evan starts speaking and it reminds me why I’m glad I’m single.

EVAN: Don’t you want what me and Carly have?
WHAT CARLY AND EVAN HAVE:

KAMIL: Yeah, I don’t want that.

Kendall and Joe win the date because apparently they’re the most “stable.” What we don’t see is while they’re making this announcement Mike Fleiss is pointing a gun at Carly and Evan’s heads from behind the cabana.

HAHA. Kendall and Joe aren’t actually even going on a date, they’re just babysitting for the married couples. Laaame. Astrid doesn’t think Kendall should be trusted with a baby because she likes dead things in her hands, and it’s an excellent point. I’ll have child services ready and waiting on speed dial.

Joe is breathing the same air as a screaming baby and every woman in America’s ovaries just exploded at the cuteness. I can’t.

Cut to the rest of the house, who are discussing the prospect of marriage and kids as they pound enough tequila to tranquilize a miniature horse (RIP Lil’ Sebastian). Jordan announces that he’s ready for kids but only if he “finds the right breeder.” Well Jordan, my dog Snowball is AKC registered and available, and after that comment I think she’s about the only one willing to “breed” with you.

Okay, Cassandra is great. She’s being super direct and calling Eric out on all his bullsh*t. He keeps telling her that he really wants a relationship but can’t give her what she wants… which is a relationship. Tbh it kind of sounds like he just wants to bang in Paradise and then never speak to her again and have her be okay with that. Sounds like, oh I don’t know, every guy in New York City.

Eric starts freaking out because Cassie isn’t having it. She dared call him out on his bullsh*t and he starts having a mental breakdown. See, this is what’s wrong with men in 2018. Cassie points out that he’s essentially blowing smoke up her ass, and rather than apologize for assuming a grown-ass woman would like to be treated as his own personal summer toy, he feigns a mental breakdown and leaves Mexico. And everyone praises him for being in tune with his emotions! Meanwhile, if one of these girls *cough* Tia *cough, cough* pulled something similar then they’re “crazy” and “batsh*t.”

ERIC: Angela leaving was really hard on me. She was my girl.
ME: YOU KICKED HER OFF, THOUGH

See, this is a little confusing to me because I didn’t see a gun to Eric’s head forcing him to pick Cassandra over Angie?? I think Eric has multiple personalities or something, because sh*t isn’t lining up.

Wow wow wow wow. He’s waking Cassie up from a nap so he can break up with her. Soooo many levels of f*cked up right here.

ERIC: You awake?
CASSIE: No?
ERIC: Good cause I just wanted to say that I’m leaving. Have a great summer!
CASSIE:

So I guess there are no new men coming tonight? Is that why production throws Chris a bone gives him and Krystal a date card? Chris keeps saying how he can’t imagine his life without Krystal, and I love that he conveniently forgets comparing her to an order of calamari in a four-course meal of women. Krystal, does it make you feel better knowing that at least you weren’t the hotel pillow mint he described Tia to be?

Yes, but at what cost sweetie?

Back at the beach, everyone is playing truth or dare like it’s my seventh grade sleepover. Here’s hoping Annaliese falls asleep early and Shushanna sticks her hand in a cup of warm water so she’ll wet the bed. Fingers crossed!

Kamil says that Shushanna freaks him out because she’s always staring at him, and yet he finds Annaliese, a woman who probably peed all over his belongings to mark her territory, normal. Interesting.

Kiwi Jordan also gets a date card and asks Shu on the date since he gave her his rose last week. Logical. She turns him down, though, because she says she’s still into Kamil. She’s like “Carly and Evan didn’t like each other at first either and now they’re married with babies.” Tbh she’s not wrong. Carly literally compared Evan’s personality to a flaccid penis. #NeverForget

Shushanna pulls Kamil aside so she can tell him once again that she will never give up on them. Kamil following her rn is like his mom told him he has to clean his room and she’s not leaving until he’s done. I’m dying. This girl is bonkers. He’s been pretty clear from the get-go that he’s not into her.

KAMIL: I’m not into you AT ALL. Do you understand?
SHUSHANNA:

Annaliese is no better, though. Kamil is really stuck between a rock and a crazy place.

Shushanna says she likes a challenge in a man, but why do I feel like her challenges always end in a restraining order?

Kamil starts exercising his 40 percent of the relationship and makes Annaliese confront the Russian for him. I don’t like that Annaliese calls Shush a witch, though. Like, what, just because she stares at someone too much and may or may not wish bad things upon their significant other, that makes her a witch? ‘Cause if so, then I’m a witch.

KAMIL: Shush has no beautiful inside, just a very beautiful outside which doesn’t match my insides.

Diggy shows up in Paradise and tries to ask Shush on a date but she turns him down because she prefers her men emotionally and legally unavailable. It’s a fair point. Diggy asks Olivia on the date instead, which I think is a wayyy better match anyway.

Okay, I’m starting to think Shushanna’s strategy in Paradise might be similar to my strategy for dating in general: complain about being alone but never go on any dates when people ask you.

Fast forward to later that night, and Shu decides that she might actually be into Kiwi Jordan! I’m sure it had nothing to do with that hyper suggestive pep talk Olivia gave her and everything to do with their “connection.”

Everyone keeps calling Shushanna a witch, but do they know what witchcraft actually involves? They’re like “she’s all over the map she must be a witch” but she’s not acting any less insane then I do after five mimosas and a minute alone with my Snapchat followers.

SHUSHANNA: *is honest about her feelings and isn’t afraid to pursue a man*
PARADISE:

Shushanna pulls Kiwi Jordan aside for a date she plans around the fire and he seems genuinely terrified to be anywhere near her and an open flame. Kiwi Jordan tells her “it’s not me, it’s you, because you literally told me to date other people” and she f*cking loses it. She’s like “if you want dessert it’s over there, bye” and then throws herself on the nearest daybed and starts sobbing.

Side note: Shu crying in this day bed is literally me when I can’t find my headphones and want to go to the gym. True story.

That’s just a stumble! Ah, that’s good. I’m going to use that the next time I vomit in my bathtub instead of the toilet.