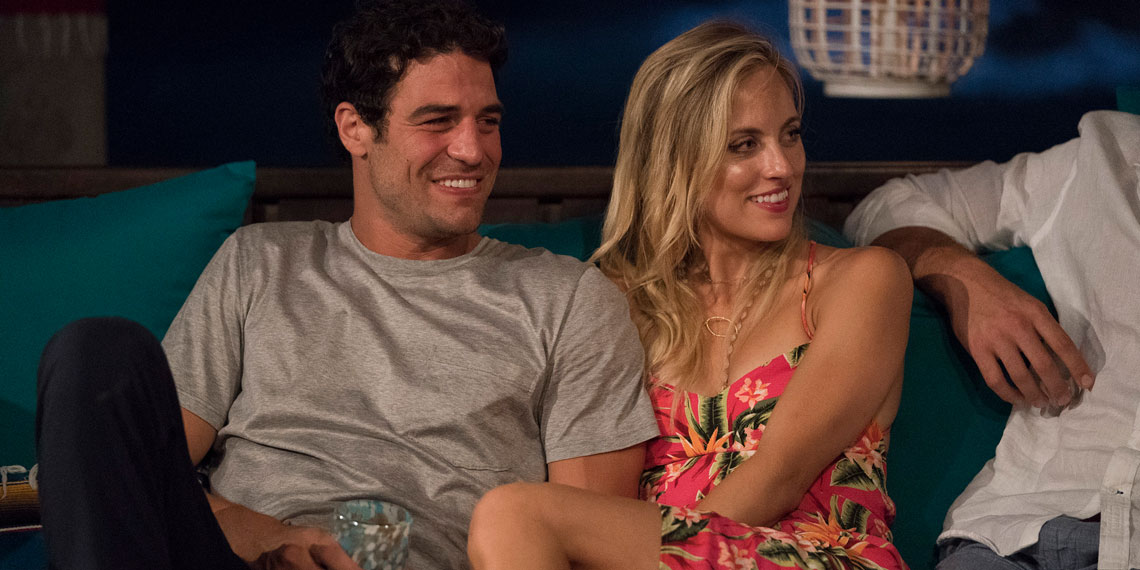 Another week of Bachelor in Paradise means we’re one week closer to summer being over. But honestly, summer’s already over because I’ve already received an email from Starbucks about PSLs. Before we bring on the Uggs and yoga pants, let’s recap what happened where the clothing is minimal and tequila is plentiful, Paradise.

We start off episode six with the hottest quarterback I’ve ever seen, Angela, throwing the football on the beach. Like most of the relationships in Paradise, the pass lands incomplete. All the couples seem smitten with each other, with the exception of the love triangle that is Jenna, Jordan, and Benoit. (Quick flashback: Last week Jordan wrote “I’m Sorry” in the sand, so to say this dude is sprung is an UNDERSTATEMENT.) It’s the morning after Jenna and Benoit’s date, and as if they didn’t make out enough last night, Benoit continues to be Jenna’s human breathing machine. Have you seen someone perform CPR on a live human? If you haven’t, watch this episode and you will.

The craziness that is “Chris-tal” continues on the beach. Krystal begins hammering Chris with some hard-hitting questions like “Chipotle or Qdoba?” and the reccurring game of “Which of my voices do you like the best?” Apparently he answers the questions correctly, because Krystal mentions how he’s starting to make her glow. I’m sorry Krystal, unless you’re the Green Power ranger or you came out of a magic lamp rubbed by Aladdin, you can keep the glow comments to yourself. This comment of Krystal’s enlightened state all but assures you that “Chris-tal” will ride off into the sunset as the happiest couple in Paradise. But if you’ve watched this series for more than a commercial break, you know that’s not going to happen.

Enter our boy Connor. You may or may not recognize him from Becca’s season, but you damn sure recognize him from his breakthrough appearance in the movie Jaws I, II, and III. My man has a jaw like a hammerhead shark. (Dear candy Jawbreakers: Proceed with caution!) Connor walks in, and immediately Krystal is at a loss for words (which is the best because at least her voice is consistent). Connor starts pulling girls to chat with, but he needs to go no further than Krystal. She somehow finds her voice, and tells Connor, “I came here to meet you and only you and nobody else.” Chris must’ve have been hungry because Krystal immediately runs to him and feeds him some diet bullsh*t on how she told Connor that he should ask some other girls. *Maury Voice* The lie detector determined THAT was a lie. However, Krystal agrees to go on the date in order to be the respectful human that we know she is.

This date has to be one of the least exciting to date. Essentially they go to a campfire to get buried alive and hit with a Mexican Swiffer. They then go deep into the ocean holding on to each other tightly because neither of them got past level 1 swim lessons. Back on the beach, Jordan pours his heart out to Jenna like he’s facing 20 to life if he has to go back home. Whatever he says works, as they proceed to play tonsil hockey until Jenna has had enough……until she hasn’t. She tags Benoit in for his turn, and she begins sucking his face with strength only a Dyson vacuum would envy. Jordan sees this, grabs Benoit, and invites him to the hot tub for the MANLIEST of spa days where they let their legs soak as they argue about who’s right for Jenna.

In “Out of Left Field” News: Kenny has to go back home because he has some overdue RedBox movies and THEY. DON’T. PLAY. (Real reason: McKenzie has a recital that he refuses to miss, and I’ll fight anyone who has an issue with that.) That puts Annaliese back to square NEGATIVE 1 in her quest to look for someone to go half on a baby with. Krystal then returns (with a LOT less lipstick than she left with) and tells Chris, “You have nothing to worry about.” This tells us that T-Rex jaw probably isn’t for Krystal, and Chris is still in the driver’s seat.

Another Exit: John put Jubilee in the friend zone, and she essentially says: “I have 8 friends already and don’t need 9,” and bounces.

A new arrival, Kamil, shows up, and all the girls instantly become single. Annaliese marks her territory with a scent only rivaled by that of a skunk and gets the date with Kamil. They go on a daredevil-inspired date, and end up taking a dip in a Mexican pool with no lifeguard present. RISK. TAKERS. He honestly could’ve taken Annaliese to a hostage situation, and she would just be happy to have a man.

Meanwhile for some reason back on the beach Kevin tells Astrid, “I wish you went on a date with another dude.” I’m single right now but Kevin, I do know this: DON’T ATTEMPT TO LEASE YOUR GIRLFRIEND. He later backtracks (you have to think there was some sort of threat against his life here), and Astrid takes him back.

Benoit continues to try to inch closer to Jenna, and Jordan has had enough. He pretty much lays it all out, like clothes on the first day of school, and Jenna buys it. She immediately goes to Benoit and says: “Is your sh*t packed? If not, it should be.” DOWN. GOES. BENOIT.

Don’t think I’ve forgotten about the girl next door, Kendall. She’s into Joe, but she needs help to prove to herself that Leo isn’t the man for her.  Help’s name = Kevin, as he mentions to Kendall that Leo kissed Chelsea, thinking that she already knew. With the determination of finding his lost hairdryer, Leo’s dying to find the snitch that ratted him to Kendall, and Kevin says, “Yup, it was me, and I give ZERO f*cks.” Now Kevin, as a fireman, I thought your job was to put out fires, not enflame them?! In a heated argument between Leo and Kendall (over what we can only suspect was about who stole Leo’s last hair tie) emotions get high, and her knight in shining armor/board shorts, Joe, comes to her rescue.

Episode 7 stats with Joe saving Kendall from low-budget Fabio (sorry autocorrect, meant Leo). Benoit still tries to find out where he went wrong with Jenna and she ends up crying, which leaves Jordan “mad.” You ever see two models that don’t want to fight because they have a shoot the next day? Yea, this is pretty much the same thing. No fight happens, they do their sassy argument, and boom, off to the spa. This does make Benoit realize that his choices for a rose are either Chelsea or 1800Flowers, so he begins to put in work.

DATE CARD TIME!!! Eric gets a date card for him and Angela that involves a nice hotel room, gold toilets, and enough dairy to leave the state of Wisconsin empty. I’ve seen more affection between second graders on a playground, but hey, I just trust E Bigger did his thing and they left as a stronger couple.

Time for the Awkward Moment of the Day: Kendall kisses….John? This reminded me of when you’re friends with a girl for like, 10 years, and you just kiss her to see what  her tongue feels like. Boom. Done. Nothing there. Guilt/Producers force Kendall to tell Joe, and as laid-back as he is he says: “Forgetaboutit.”

Cocktail Party Time!!! 8 women, 12 guys. Leo starts off the “toasts” by calling Kendall fake and Joe “Grocery Store B*tch.” Joe confronts him, but the producers prevent World War III from happening, as it looked like Joe was about to beat the brakes off of Leo. I know Leo is a stuntman, but you shouldn’t have pulled that stunt….man. Without the producers, you’re two seconds away from having three black eyes. Exit stage left, Leo.

Cocktail party continues, and it’s essentially ring around the Chelsea. David, Connor, John all vying for Chelsea’s rose. David tells her he can’t go home yet because his mom’s not home and she has the only key, Connor’s jaw is too strong for anything serious, and John’s dad jokes are suspect at best. Rose ceremony plays out as such: Astrid to Kevin, Jenna to Jordan, Tia to Colton, Kendall to Joe, Angela to Eric, Annaliese to Kamil, Krystal to Chris, and Chelsea to John. On cue, another Benoit meltdown about him not finding love. Don’t worry buddy, with shows like The Proposal in production, anything is possible.

Next day new arrivals show up, starting with Olivia with some Chi-town flavor. I don’t know why everyone didn’t just shout “Pick John,” because at this point, he’s the only one available/wouldn’t be shanked by their girlfriend. Their date consists of them crashing a quinceañera, essentially a latin Wedding Crashers minus a bride and groom.

Eric and Angela continue to talk about how they’re exclusive and would reject dates, which in BIP producer terms means “we gotta f*ck this up.” In comes Cassandra, from Juan Pablo’s season. Right after their “exclusive” talk, Cassandra asks Eric on a date *Kanye shrug* and he says yes. Angela is like “WTF?!” to which  Eric says: “I slept on my stomach last night, and now I’m seeing everything totally differently.” Eric, don’t be surprised if your suitcase is soaked in lighter fluid when you get back, because your clothes, like your relationship, might be up in flames.

I know you’re thinking it…..HOW DID I GET TO A RECAP WITHOUT TALKING ABOUT COLTON & TIA?!?! Something tells me we’re in for a heavy dose of the two next week….enjoy the peace while we have it….until next week!!