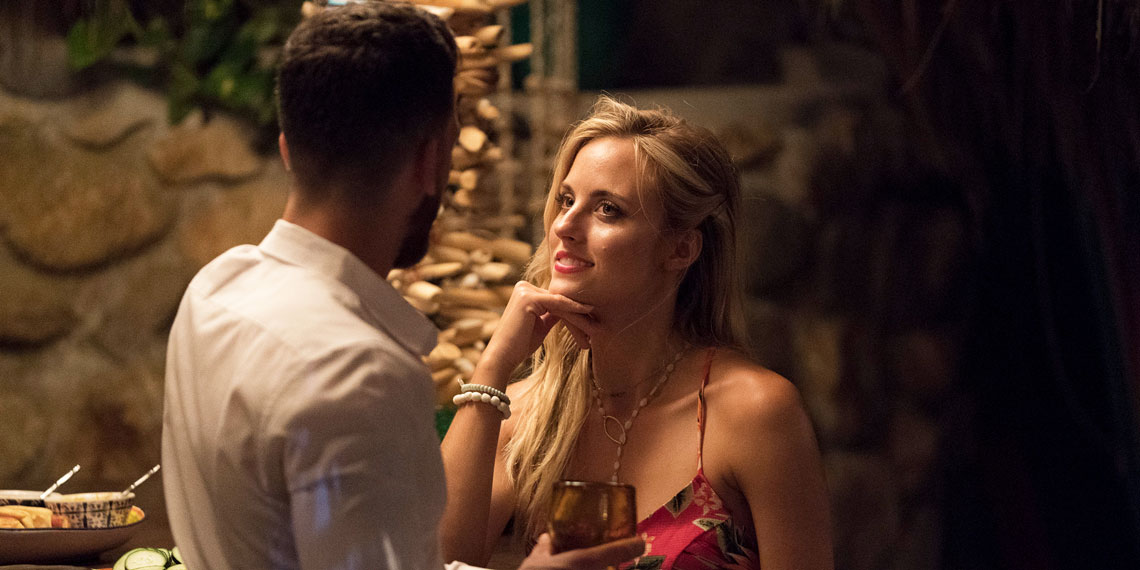 It’s barely been 24 hours since America cancelled Leo for being a manipulative piece of sh*t, and already I have to watch a repeat of him gaslighting Kendall. This should be good for my blood pressure. Shall we see what tonight’s episode of Bachelor in Paradise has in store for us?

JOEEEE. BE STILL MY HEART. Joe rescues Kendall from being verbally attacked by a grown-ass man, and all of America just started believing in love again. Seriously, he is too cute. Just watching him be all protective and adorable with Kendall is giving me urges to mount her head on my wall. I mean, she does have working eyes and ears, yes? How could she ever pick Leo over Joe??

I still don’t think he should take her back, though. She made out with another man! He should save himself for someone better. Like me. Obviously.

Okay, is that really the outfit Jenna chose for a rose ceremony? A rose ceremony! She’s wearing soffe shorts and a bra top. It looks like what I wear to  take selfies on the bike. Come on.

JK we STILL aren’t at the rose ceremony. Apparently ABC hasn’t been taking my tweets to heart about wrapping this season tf up, because they’re going to drag this rose ceremony out for another entire day.

Damn. Benoit moves on quick, doesn’t he? He’s got Chelsea cornered in the hammock and, honestly, she could do better. I truly don’t understand why she’s been so overlooked this season. She’s super pretty and not insane. What more do you people want?

Eric gets a date card for reasons that are unclear. If anyone deserves a date card at this point it should be Chelsea! He asks Angela on a date and I’m hoping that now I’ll finally be able to see a personality trait out of this girl. I won’t hold my breath, though.

So wait. For their date they get to hang out in a hotel room? Seriously, what is happening here? There’s a crazy amount of alcohol littered throughout their suite and the staff is being weirdly discreet about the entire thing. What do they think is about to happen here? Angela keeps talking about how this date could end in love, but I think it’s more likely that this date will end in explosive diarrhea. HOW much dairy are they trying to feed these people??

WAIT. They’re getting in a pool now?? After they consumed enough cheese to feed a small country? That’s cruel and unusual punishment. TOO FAR, ABC. Too far.

Back at the beach, Venmo John is trying to steal Kendall from Joe and SHE LETS HIM. Kendall, are you brain damaged?  Because I really don’t see another plausible explanation for WHY YOUR TONGUE IS DOWN VENMO JOHN’S THROAT.

KENDALL: I made out with someone else.
JOE: I’m falling for you.
ME:

Joe’s like “I really hope we can focus on each other and my girlfriend stops making out with other guys.” That would be nice, wouldn’t it, Joe?

LEO: Paradise needs to burn to the ground and start fresh.
ME: I can Venmo you money for the matches if you want!

Moving on to the rose ceremony. I’ve only aged 20 years since the last one, but it’s chill. I guess Chris Harrison was busy doing nothing and getting paid for it, so he has Annaliese step in this week to give the inspirational speech at the start of the cocktail party speech. She keeps talking about how great it is that everyone is finding love and she’s acting like she didn’t just meet Kamil yesterday.

LOL. Leo takes a route I usually only reserve for ex-boyfriends, and not only burns his bridge with these people but throws a goddamn grenade on it. He’s like “that was a cute speech, Annaliese, but if you could all just refer to my latest burn book entry, “Paradise”, that would be great!”

OH SH*T. Joe runs after Leo and is like “say that to my face.” Joe is from South Chicago and can definitely hold his own in a fight. Leo would still be looking for his ponytail holder to get his hair out of his eyes while Joe kicked his ass.

Meanwhile, Kendall is all starry eyed now because Joe is the only man on that island who would actually risk getting his shirt wet to defend a woman’s honor.

OH THERE YOU ARE, CHRIS HARRISON. Nice of you to join us. And he even deigned to give us a little speech! How special. I guess he needed to pop by to pick up his paycheck so he decided to throw a few lines out for the camera while he was there. How kind of him.

Chelsea is the only single girl left and four guys are up on the chopping block this week: Connor, Venmo John, Benoit, and the chicken. It’s like she’s at Baskin Robbins and has the choice of any ice cream she wants, but unfortunately every flavor is poop.

Lol Chelsea looks genuinely terrified at the thought of being wooed by any of these dipsh*ts. Meanwhile, all the men are acting more desperate AF. Benoit keeps trying to make out with her, and Connor has his shirt unbuttoned to his goddamn navel. This isn’t a harem, Connor! Cover up!

So apparently Connor drinks tequila out of a champagne flute and people hate him for it. Honestly, I feel like his drinking habits are the least offensive thing about him.

WHAT. I felt like her and Benoit actually had some sort of connection, albeit a creepy one. I, mean, how has John managed to stick around for this long?? I’m genuinely perplexed.

Cut to the next morning, and new women are already coming in. Olivia, who was apparently on Arie’s season though I’ve never seen this woman before in my entire damn life, walks in first. Like, could ABC find no relevant contestants this year to bring to Mexico? I would not at all be surprised if Olivia turned out to be some rando they pulled off the streets and are now trying to claim was on Arie’s season. Nice try, ABC.

Olivia chooses John for her date because everyone else said no. I hope he takes that to heart. Okay, why are they crashing this quinceañera, though? Is it not enough that they make a mockery of their beaches every day but now they have to spit on Mexican tradition by making out by the punch bowl? Really?

JOHN: No one gets down like a programmer does
ALSO JOHN:

Back at the beach, another rando shows up at Paradise. Cassandra was apparently on Juan Pablo’s season, which was FIVE YEARS AGO. ABC literally dug this b*tch out of the catacombs. I was still buying Four Lokos with my fake ID when this girl was still relevant, but okay.

ERIC: Damn, baby got BACK
ME: That woman is a mother, Eric!

Eric finds out that the theme of her date is “go big or go home” and he’s like “my last name is Bigger so that’s crazy.” Yeah, it’s crazy how production plans every moment of your life, huh?

OMG. Cassandra asks Eric on the date and HE SAYS YES. Angela is about to be piiiissed. He’s like “I just want to test the waters , you feel me?” Ohhhh I feel you, Eric.

I love that Angela just keeps repeating “but we said we were not going on any other dates!” Oh, Angie. Just because you ate six pounds of cheese with a man and said the phrase “all in” does not mean he’s not going to dump you the second someone with bigger boobs comes along. Come on.

And that concludes another riveting episode of Bachelor in Paradise! My mind only melted a little. I guess we’ll have to wait until next week to see if Eric goes big or goes home. Can’t wait!