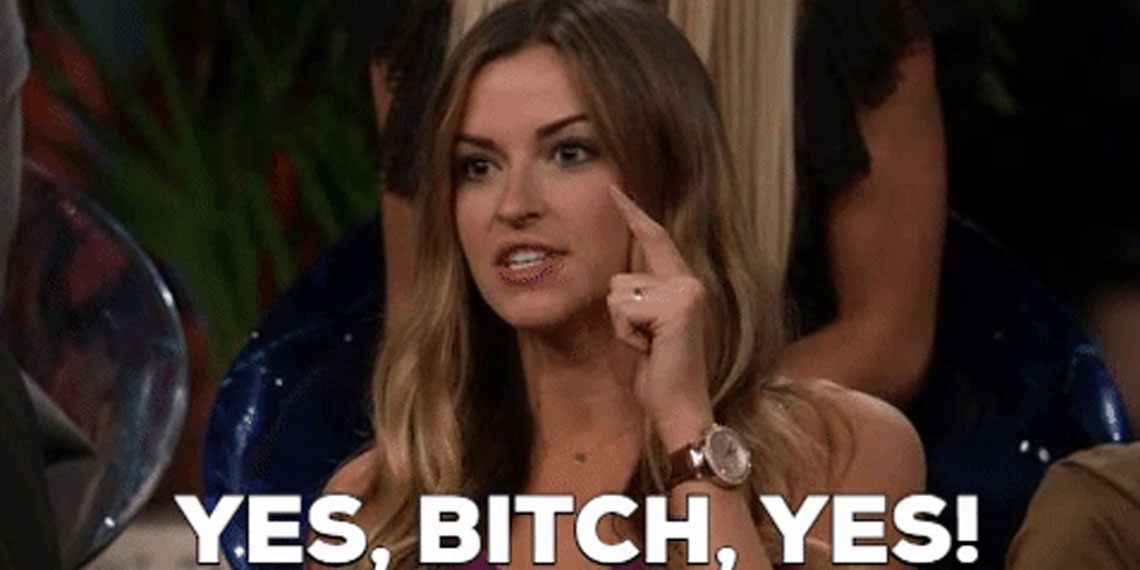 The Best ‘Bachelor In Paradise’ Recap You’ll Ever Read: The Finale, Night 2

Oh my God, it’s over. We made it, fam. We don’t have to be subjected to any more Bachelor-related programming until at least January. Now comes the sacred time when the demigod of ABC, Chris Harrison, will feed off the tears of middle-aged soccer moms everywhere before returning to Valhalla to slumber.

We start with a recap of this bullsh*t show led by Chris in a v festive dark purple tie before being subjected to a film reel of all the happy couples waking up after a full night of boning.

Here are Kamil and Annaliese, snuggling. “Alright, babe I gotta go—lots of activities.” WTF activities you got planned today, Kamil? Are you going paragliding (and hoping for a terrible accident) before potentially getting engaged to this Stage 5 Clinger?

WHOA and we’re already at the Do-They-Don’t-They pavilion on Singles Beach. This b*tch really thinks she’s getting proposed to, what with her speech about charm and this Polish man’s ability to make her believe in love again after four failed romances in the previous six days, sunburn, drunken make outs, and about two weeks of face time, total. It’s a recipe for success.

Annaliese’s face totally sinks when Kamil doesn’t propose. He’s all, “yeaaaaaah let’s slow this down. I totally want our love to blossom and to keep boning you, but I don’t really want to sign a contract with ABC saying I have to pretend to be interested in you for the next 1.5 years.”

Jenna: You make me want to open my heart again and you’re all I and my Instagram followers ever wanted.
Jordan: I believe in love at first sight and you made me feel lucky and (is he reading cue cards? cause it def seems like he’s reading cue cards) ah sh*t here’s a ring.

They hug and stuff and this all feels v anticlimactic. I figured they’d start making out with a bit more enthusiasm? I think Jordan is terrified of this woman—for good reason. Thank God he probs is dumping her as we speak.

Sexy off-putting baby-voice haver, Krystal, and former fat kid, Chris, are snuggled in bed bonding over their auras and green juice. After Chris leaves to hunt down Neil Lane, Krystal is all “omg I’m so in love but I’m unsure. Will I still get as many Fit Tea deals if I say no or like how can I milk this for 15 more minutes?”

She shows up to the pavilion in a v odd romper combo and, IDK, maybe you’d dress up more for a potential engagement? Is she crying? There’s a lot of sounds but not a lot of tears.

Do you think this is the same ring that Jordan got, too? Like did Neil offer a two-for-one deal? Asking for a friend. Also, how long are we giving this relationship? I got May 2019.

Time for the reunion spectacular and LOL NO ONE CLAPPED FOR LEO F*CK YOU LEO YOU, ANCIENT DISCO-HAIRED B*TCH.

We kick things off with Jordan making a terrible Venmo joke about John, who has APPARENTLY been playin’ games with Olivia. She’s all “yeaaaah I thought things were great and then John pulled the plug cause of long distance and started HOOKING UP WITH CHELSEA.”

I’M SORRY WHAT?! Chris quickly moves on and I’m like, v not done with this Chelsea and John narrative. No one explains further. Send help.

Chris focuses his sights on the human garbage pile, Eric. He’s still hanging on to this “we were just friends” thing and Angela’s all, “I totally played just the tip, like did that mean nothing?” Eric is confused. We’re all confused.

Next up is a 30-second fight between Benoit and Jordan. They discuss the merits of comfort vs. discomfort and Benoit is all “well I don’t compare women to foods” and Jordan is all “you’re a fly in my face” and Benoit is all “DON’T TALK ABOUT CLARE I STILL LOVE HER” and that pretty much sums up the convo.

Sigh, we also check in with Dr. Lisp, Colton, and Queen of Weiner, Tia. “We’re finally on the same page and totally just friends!” they both state and, like, I’m betting on at least one appearance from her on Colton’s Bachelor season.

And a quick note, David the Chicken and Jordan hug it out. That’s just so nice, you guys.

Alright, time to cover the most Canadian breakup of all time. Astrid is still v confused about WTF happened. Same girl, we’re all rattled. She also states that she and Kevin have spoken but are not dating and are in limbo which, wait, what?

Kevin comes onstage in a blindingly white shirt and still has no idea what to say or how to explain what happened. Basically, it comes down to the fact that Ashley I totally ruined his life and he wants another chance with Astrid.

Astrid is all “mehhhh I don’t trust you now,” but Kevin is like, “well my therapist told me I’m an idiot so I’m here to tell you I’m a moron please take me back.” Quote of the evening: “She’s one of the coolest people I’ve ever met.” Kevin, are we in fifth grade? I’m sure Astrid is like, so glad to hear how cool she is. OH, they’re totally still in love and I give this two more weeks at least!

Now, we’re treated to a montage of how incredibly PURE Grocery Store Joe really is. Chris goes in for the kill and grills Kendall like, “when did you realize you made a HUGE mistake?” Kendall is v upset and she’s like “how’d I let him get away?” Turns out, she pulled a lesson out of Annaliese’s “How to be a Psycho” manual and flew to threaten see Joe. I and all of America are very suspicious of this meeting. Why did she bring cameras? Joe is all, “I DID love you when we left the beach and I came to my senses.” Basically.

Joe comes out and the audience collectively loses their sh*t. A saint is in our midst. Joe’s like, “I didn’t think we’d ever be a thing and she totes f*cked up because, like look at me.” They keep trying to play this whole thing and AHHHHHHHHH THEY’RE ACTUALLY TOTALLY TOGETHER YOU GUYS LOVE IS REAL. To crush his soul a bit further, ABC has demanded of Joe a sacrifice. He’s going to be on Dancing with the Stars.

Here comes Annaliese, who clearly saw how flat and sad her hair was in Paradise and picked up a good volumizing shampoo. She’s like, “yeaaaah long distance blows but like I’m willing to put in 80 % so he can do like 20% and let love conquer all.” Kamil skips onstage and oh God, this is going badly. He’s like, “yeah, she met my family and friends and buys me dinner and gives me 80% of her paychecks from Fit Tea but I need like, more.” He says they lost the spark after Paradise and Annaliese looks like she’s about to go full Carrie on everyone in the immediate vicinity.

Everyone is shook, the soccer moms in the audience are booing—Chris has lost control. Annaliese storms offstage and Kamil continues to sit there like a douche. Chris is like, “soooooo you couldn’t dump her two days ago, like, not on live TV?” Kamil is like, “I mean I COULD have but then I couldn’t have destroyed her in front of a live studio audience.” Annaliese comes back out and, in a VERY Jerry Springer-esque moment, starts yelling at Kamil about the airline tickets she bought, the flowers she sent his mom, and the countless hours she’s spent scrapbooking their life together thus far.

Chris, shooketh, is like, “GTFO KAMIL” and everyone is jeering at this European man. The BIP crew comes and hugs Annaliese while Kamil is backstage like “great now I look like a douchebag on TV again” hahahahhahaha.

Oh my God, they’re STILL arguing backstage and Annaliese is like, “I’ll totally move to NYC” and Kamil looks v afraid that she’ll actually do it. So she’s like, “whatever k bye”. And thus ends the saga of Annaliese and Kamil. May they rest in peace.

Time for Jenna and Jordan to pretend they’re still in love. Jordan’s like, “mehhh she lives so far away”. Jenna is all “I was hoping someone would like me teeehee!”

Wtf they’re having a couples’ weekend making vision boards and talking about aliens and Golden Retrievers. I asked my husband why we’ve never made a vision board and he’s all “I can’t believe you’re making me watch this show.” Jenna and Jordan continue drinking mimosas and talking about how weird they are.  That was a lot to process. They ask Chris to officiate the wedding on June 9, 2019, which, again, is hilar considering the whole Jenna text-gate situation.

Finally, it’s time for *yawn* Chris and Krystal, who are decked out in wedding attire. Real subtle, guys. Chris is crying because he’s nervous, and all of us are very uncomfortable. Krystal affirms that “this is my goosey” and I curl into the fetal position, counting the seconds left in this program.

Chris meets Krystal’s pupperinos and it’s borderline cute. They’re also moving in together which, okay fine. The moms are also now besties, which I accept. And then we have a lot of goose jokes and a crystal joke and can we be done with this?

IT’S OVER. WE SURVIVED.