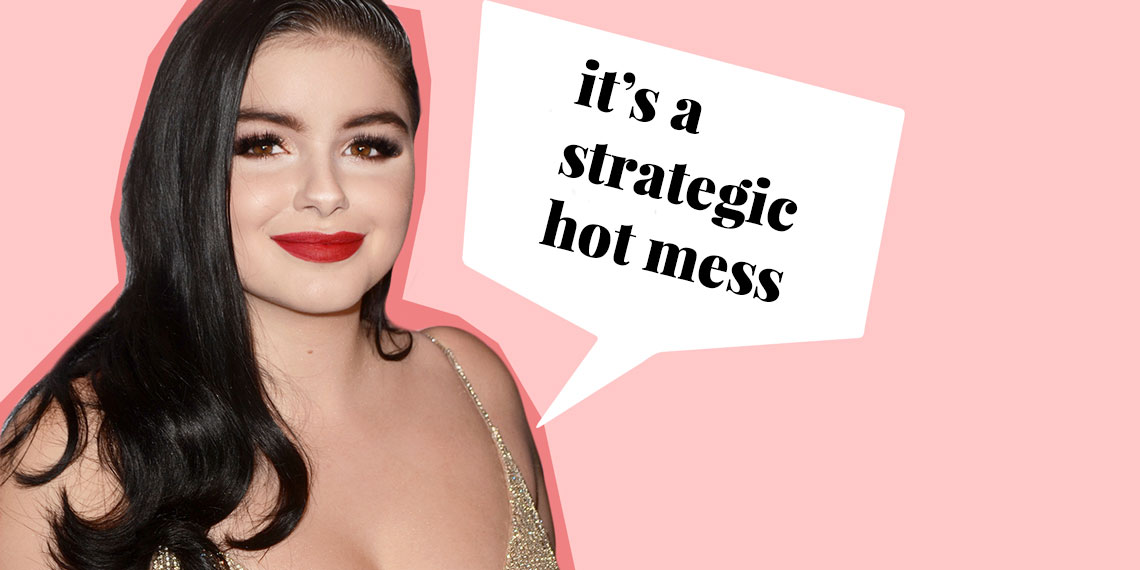 Is Ariel Winter Getting Her Life Together?

After a few days of intense deliberation (with myself), I have something important to say. I think Ariel Winter might be getting her shit together. There, it’s out in the open now. Our favorite child TV star-turned-Instagram thirst trap (tied with Bella Thorne) is growing up right before our eyes, and dare I say, she doesn’t seem like a total disaster? In the past, there’s been plenty to talk shit about, from her X-rated outfits to her questionable relationship choices to just like, her life as a person. But now, things might be turning around for her. I know you’re probably mad at me right now but please, give me a chance to explain.

First of all, we have to deal with Ariel Winter’s age-inappropriate boyfriend. Just a refresher, he’s Levi Meaden, an actor who was recently in Pacific Rim Uprising (I know, what?), and they’ve been together for about a year and a half. At first, we were all pretty skeptical of their 10-year age difference, because it’s fucking weird for a 28-year-old dude to date an 18-year-old. Like, it’s one thing for the girl who got legally emancipated at age 13 to make some iffy decisions, but what’s his deal?? But as much as the age dynamic makes my skin crawl, they’re like, kind of a cute couple? He looks young, and she dresses like she’s 25, so I guess it’s not that much of a stretch? I mean, Selena Gomez and The Weeknd only lasted 10 months, and I never gave them any shit. I hate myself so much right now. Levi and Ariel have been living together for like a year, which is honestly low-key impressive. Considering I still hate spending the night with anyone unless there’s brunch involved the next day, I guess I’m not in a place to judge. Just kidding, I spend my entire life judging others.

Okay, so Ariel’s love life isn’t a total disaster, I’ll give her that. Let’s discuss her school situation, because it’s a little murkier. Way back in 2016, Ariel got accepted to UCLA, and she was very excited. She decided to defer her enrollment a year, because reasons. She started school back in the fall, but she announced last month that she was taking a break. Now, it’s truly a choice to leave college after just six months. Ariel, wyd? She says she wants to focus on her acting career and have more free time, and like same. I would have loved to drop out of college after one semester, except the only career I had at that point was working at the front desk of the theatre department. I am Ariel, Ariel is me. As questionable as dropping out is, she’s already in an Emmy-winning show, so going to college kind of seems like going back to eat a meal after you already had dessert. Ugh, now I’m hungry.

This brings me to the most important part: Ariel’s outfits *shudders*.  Ariel Winter has made some very, um, intense fashion choices over the past few years, and we’ve roasted her many a time. Never forget the time she wore a fucking Vegas showgirl outfit to the Modern Family premiere, when everyone else was literally wearing jeans. I’m still suffering from secondhand embarrassment, but I think Ariel truly loved the attention. Last year at Coachella, the paper shredder casualty she called a T-shirt just made me sad, but it seems like she’s made some stylistic adjustments as of late. Look at me, acting like she’s a fucking art museum curator.

In her recent Instagrams, Ariel has been going for more of a sultry glam vibe, and I will begrudgingly admit that it’s really working for her. As Miley Cyrus once said (shortly before her own wild phase), it’s the climb. As much as I miss the latex bodycon dresses (mostly, the material they gave me for shit-talking in my group chat), it’s refreshing to see her in pretty outfits that can be sexy without needing NSFW warnings. Finally, I don’t feel like I have to take a shower after scrolling through her Instagram, and for that I am grateful. Did I just say I’m grateful for Ariel Winter? No, no I didn’t, stop twisting my words.

The wavy hair and red lip is a seriously good look for her, and I’m exited to see how her style journey evolves next. Oh my god, I just read that back and immediately felt the need to take several shots of vodka. Someone send me a new Instagram thot to shit on ASAP, I can’t handle this. I’m not saying I’m like, obsessed with Ariel Winter or anything, but our favorite physical manifestation of daddy issues has come a long way, and it’s messing with my mind.

Modern Family is ending next year, but maybe Ariel isn’t destined to be forgotten in the graveyard of child stars that went wild? Maybe she’ll go back to UCLA and be a communications major or something boring, but maybe she’ll actually become a real actress that gets cast in things? Is “Academy Award Winner Ariel Winter” something that we’ll have to say in the future? Just shoot me now, this is the end. I don’t want to say I’m rooting for her, but I might be rooting for her. That is, until she shows up next week wearing like, a paper towel as a dress or some shit. This is a confusing time, and I’d appreciate your support while I’m on this soul-searching journey.