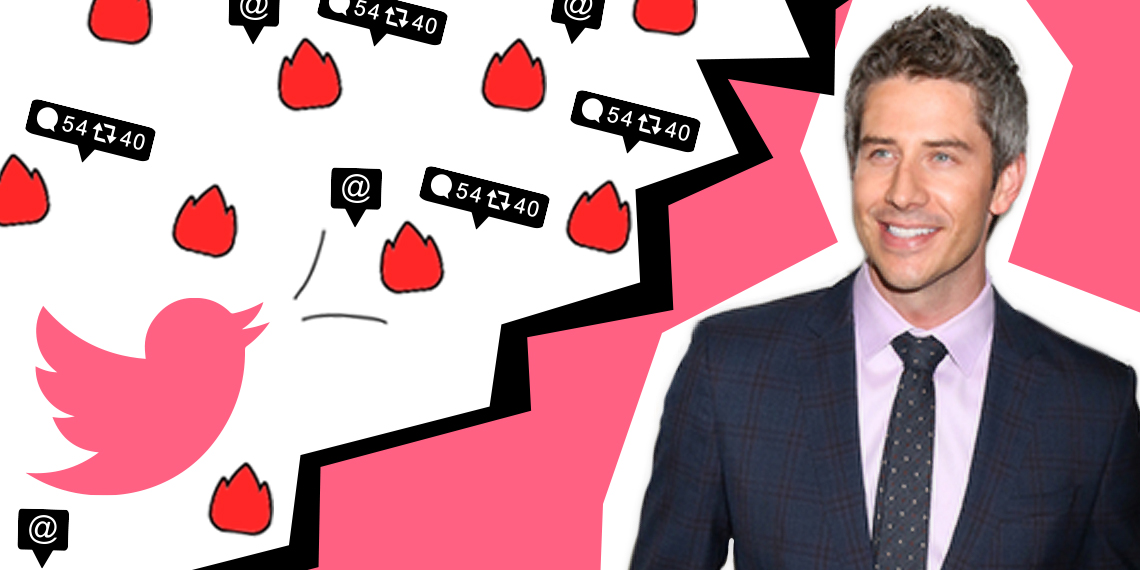 Congratulations all, we have nearly made it to the finale of the most boring Bachelor season of all time! We’ve laughed, we’ve cried, we’ve shuddered at Kendall’s taxidermy room, we’ve made fun of Arie Luyendyk Jr.’s lack of vocabulary. Chris Harrison keeps promising he’s about to bring the drama, but I’ll believe it when I see it. You’ll be lucky if I don’t switch between the finale and an old episode of Monk, mmkay Chris?

As we’ve been saying, Arie Luyendyk Jr. and his fembot molded out of plain oatmeal and the brunette with the hot ex she should have definitely taken back have not exactly been bringing the personality this season. But I guess Arie has had enough of us making fun of him on this website, on Instagram, on Twitter (where he blocked us), on Snapchat, and to our mothers, because he is fighting back. All of a sudden his tweets (and occasional IG) are getting savage and the Zzzquil in a suit we know so well has lost all his chill.

In this article, we will take a look at Arie’s most savage recent social media comments and examine what lead him to this point. Or, you know, just mock him mercilessly.

Well isn’t that rich? The man who has starred on two shows in The Bachelor franchise is coming for women who are trying to make an honest living by getting just reality TV famous enough to cut a deal with SugarBearHair. Are you the only one who can be on more than one season, Arie? That’s some sexist bullshit. And you should know better than that—the smart ones go into The Bachelor with the intention of being on Paradise, not trying to score your boring old ass. You think Bekah M., the love child of Tinker Bell and a very delicate strain of marijuana, came into this looking to get married? Sweetie. That’s so cute. And do please leave the burns about desperate girls on dating shows to us. We’re better at it.

2. Arie Has No Time For Olivia Caridi

That’s a shame.. less material for your podcast! #ad https://t.co/AG58hgDiml

Not only is Arie turning on his own former girlfriends, but he has also taken to shitting on contestants from other seasons that have managed to extend their 15 minutes slightly longer than he has. Since Olivia is from Beautiful Ben Higgins’ season, you might not remember her. This will jog your memory.

It’s all ringing a bell now, right? Look Arie, I don’t think Olivia should be punished for being well-liked. And it’s really your own fault that she’s working on her career and you’re working on sleeping your way through sorority row. Take a serious look inside and ask yourself, “who am I really mad at?”

I WAS AN ESL STUDENT! https://t.co/FNSMeK5piw

Arie wants us all to know the reason he can’t pronounce words is that he took English as a second language. Fine, I understand that. The only languages I know are English and the Italian words that are in The Godfather, so I’m not going to mock someone who can speak multiple languages…except that this excuse is as flimsy as one of Bekah M’s dresses. I just checked the always reliable Wikipedia and it tells me that Arie came to America when he was three. Were 33 years of English not enough? At what point do we blame it on stupidity? And is ESL also the reason for the delicate hand gestures? In Arie’s defense, I do find his mispronunciations far less annoying than Nick Viall’s lisp and Chris Soules’ inability to string together full sentences around all the giggles. Hold that compliment close when you’re crying at night, Arie, because it’s the only one you’ll get from me. Capiche?

Lots of opinions here on social… Hard to express the difficulty of a conflicted heart.

On Instagram, Arie is less savage, more pathetic. I actually thought this was a sad, handwritten book and not a social media platform. You’re showing your age, Arie. One, because this reads more like a MySpace post I wrote in middle school when my friends couldn’t understand why I was mad they went to the mall without me, and two, because this basically says “kids these days are such bullies.” Shake your cane some more, Arie. Maybe it will make you as muscular as Becca’s hot ex.

I’m sure after the finale we can expect more clapback attempts from Arie since the show continues to tease the drama. Arie claims he is “ready for the backlash”, but judging from how well he has handled criticism to date, I believe that as much as I believe Stassi’s lips were real on Winter Games. He’ll most likely be quietly crying about it in Lauren B’s arms, trying very hard to avoid getting tears on her motherboard.