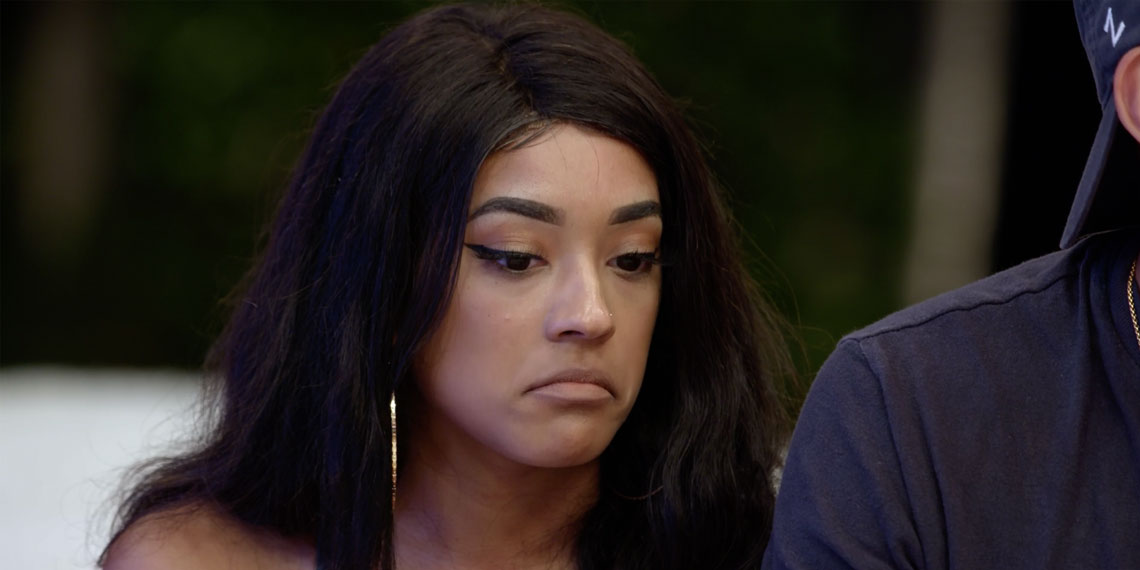 ‘Are You The One?’ Recap: A Match Made in Hell

The episode begins as our unlucky in love-rs traipse back to the house to dramatic and depressing music, their two pathetic beams looming heavy behind them and on their hearts. The group calls for a “family meeting” and I’m not sure if you should call the group of people you’re banging family. That’s only legal in a few states, and I don’t think Hawaii is one of them.

The group immediately starts ganging up on Zak and Morgan; apparently no one believes they’re a match. Bria’s mind control is working! What kind of sorcery is this? The group disperses, having come to no real conclusion other than the fact that Lewis needs some Gatorade.

Out back, Kenya and Lewis are talking to Bria and trying to convince her to get Zak back. Damn, Lewis, you are shady. “Just as fast as she got him, you can get him right back.” Not saying I didn’t say this same thing to my distraught friend when convincing her to crash her ex’s wedding, but still.

Kayla and Cam sit down and he starts telling her he has reservations. CAM! Am I going to have to take back all of the nice things I said about you last week? I’ll do it. I will. Okay, let’s see why he thinks they aren’t a match. She doesn’t like the ocean and he does. LOL. She gets motion sickness easily, and he likes to drive. LOL. She doesn’t like Donald Trump and he does. Oh. Okay. So that one could legit cause some big problems. HUGE.

Over in the kitchen, Andrew and Lauren seem to be getting along. He tells her he only wants one wife. And also a motocross bike. Okay Andrew, this isn’t a f*cking Christmas list. Take that one up with Santa at a later date. He should also add sunscreen to that list because he still hasn’t figured out how not to get burnt. SPF 50 pls, Santy!

OMG Lauren just asked Andrew if he could go for a blonde and he told her “absolutely, my mom is blonde.”

Lauren and all of America:

It is literally still nighttime, and now the crew has moved to the pool and is playing a friendly game of truth or dare. Cali dares Nutsa to play “nervous” which apparently is a game where you grab a guy’s d*ck? I don’t get the point. Do I need to call HR? Anyway, she chooses to grab Daniel’s. Samantha is not pleased. She starts yelling at Daniel and telling him it was disrespectful for him to let another girl grab his d*ck in front of her. I mean that’s fair, but like, you’re on an MTV reality show where you basically have to hook up with multiple people to win, so the normal rules of etiquette don’t really apply.

We have finally made it to morning and the cast is hanging out in the water. I guess Lewis can’t swim, since he’s wearing a life preserver. Maybe they should have given that to Kwasi last week for his surfing date? Unless they wanted him to drown?

Nutsa seems to have decided that her voice is not annoying enough, so she decides to physically assault her crush Brett with a pillow and with her body. Then she decides to chase him. It’s like watching a hamster finally get free from its cage.

Cam and Cali are openly flirting, and it’s causing Kayla enough distress that she has to go talk to herself in the mirror and cry in her bed. Dramatic much? I call that a Tuesday night.

Terry shows up and reminds everyone of his girlfriend, the beautiful fate button. It’s time to choose some people for dates! Fate chooses Zak, Daniel, Bria, and Asia and I guess Bria’s mind control extends to the fate button as well. The house breaks out into applause because they are afraid Bria will hurt them if they don’t clap want to find out if Zak and Bria are a match.

Kayla and Kwasi start vibing and I’m happy for her because I don’t want to see her crying in her bed again. Put yourself out there, Kayla! There are 9 other men in this house that will eventually dump you the second someone hotter comes along.

Okay, Samantha sits down with Daniel and I just had to listen to like, a solid three minutes of her saying she doesn’t trust him and he hasn’t earned her trust and affection for her to then go into the boom boom room with him. Next time spare me the bullsh*t foreplay and let’s get right to it.

Moving on to the date, our couples are going dune buggy-ing. Zak decides to take the wheel instead of Bria, which I think is the safest choice for all involved. They’re taking them on a road, though—I thought these were for off-roading? Does one often encounter dunes on the highway? Our daters pull their buggys up to the coffee shop for the rest of date. So their date is literally a pit stop I made before work this morning. MTV is really forking over the big bucks this season.

Over their lattes, Zak tells Bria that he’s surprised that they were able to pick it right back up and he could see why they might be a match. DUDE! Never before in my life have I seen someone so easily distracted by what’s in front of them. Wait, I lied.

Zac and Bria make out. I’M CALLING THE POLICE. If this isn’t a case of thinking-with-your-d*ck-itis, I don’t know what is.

Back at the house, Terry shows up to earn that minimum wage paycheck. Zak and Bria tell the house that they kissed and Morgan is sad. Don’t worry, Morgan! Once he sees you and remembers you he’ll make out with you too!

Samantha calls out Zak for being a d*ck in front of Morgan. In the interview room she says this about Zak and Bria, “They literally both don’t care how other people feel so maybe they are a match made in heaven. Or a match made in hell.” Truer words have never been spoken, Sam. We applaud you and we thank you.

As expected, Zak and Bria were voted into the truth booth. They both are confident that they’re a match. They should be as confident in their relationship as I am in the MTA’s ability to get me anywhere on time except into an early grave.

And LOL they’re no match. Literally I’ve never been happier to see two people so upset. You would murder each other, you f*cking morons!! Not even the devil would match you up because he doesn’t want to see Bria in hell any earlier than he has to!

Bria is sobbing and Zak tells the camera he needs to move on. LOL what a douche. I’m going to set his house on fire.

Naturally, Bria comes back looking for a fight. I’m sorry, a debate. She was on the debate team, y’all remember? Immediately she moves on Kwasi, who told them that they suck when they returned from the truth booth. Zak immediately ditches. LOL what a douche. Bria is screaming at Kwasi, so naturally he gets heated. God, Bria, have you heard of a joke? Did they not teach you about those in the hellmouth you crawled out of?

Now Asia is jealous that Bria gets to do all the debating so she decides to start sh*t with Nutsa when our poor little hamster friend just wanted to get some food! I literally do not even know what this fight is about. GOD where does MTV find these people?? I honestly think that they go to the trashiest bar in Tampa, find the girl that just punched another girl, walk right up to her and say “hey, wanna be on our dating show?” Bria, let me know if I’m right.

Moe is turned on by Asia’s bullying, so he follows her outside to tell her he’ll always be there for her. You say that now, Moe, but just you wait until one day you are just walking to the kitchen to get food and she jumps down YOUR throat.

SHOCKER! Zak wants Morgan back. He pulls her aside and says he doesn’t want to be with Bria and he’s actually into Morgan.

Zak: So what are we?
Morgan:

Bria sees them talking and strolls out hand in hand with Kwasi. I guess they’ve made up. Kwasi finally calls Zak out in front of both Bria and Morgan and asks him who he would want to pursue a relationship with outside the house. He panics. Might I remind you, he LITERALLY JUST TOLD MORGAN HE DIDN’T WANT TO DATE BRIA.

Zak finally decides that since he already knows he’s not a match with Bria, he’ll say Morgan. Bria loses her sh*t and gives them all a lecture, telling them they’re not better than her. Oh, Bria. Honey. I know a cockroach that’s better than you.

Zak and Morgan take it to the boom boom room for one last f*ck before Bria kills them. Morgan! For shame. Missionary with the lights off is not worth your dignity.

Inside, Cali and Cam are talking. He tells her he likes her because she’s “nature girl” and he’s “nature boy.” OH REALLY. Why do I get the sense that Cam’s idea of exploring nature is drinking a Natty Light in his backyard with his bros?

We’ve finally made it to the matchup ceremony and it’s a guys night to pick. They decide to go with their hearts instead of with strategy because last week strategy didn’t work. I wonder if anyone took a minute to think perhaps they just came up with a bad strategy? No? So just me then? Cool.

Okay am I missing something? Where’s Daniel? And Bria? They’re sitting next to each other but they never showed him picking her. Why didn’t he pick Sam? I’M SO CONFUSED. It’s like he wants his d*ck cut off.

The group gets four beams! Papa Terry is proud and this week he tells them to go take a shot for him. Oh they will Terry, they’ll each take nine of them.

Back at the house, Cali reminds everyone that only two couples repeated tonight and it was her and Tomas and Morgan and Zak, which means that only one of them is a perfect match. Cali and Tomas are convinced it’s them and that’s enough to get them to the boom boom room, but apparently not enough for Tomas to get it up.

Back outside, Kwasi and Kayla are talking and Cam is shocked. YOU TOLD HER YOU DIDN’T THINK YOU WERE A MATCH! Of course she is talking to someone else! And now you’re jealous? That’s not how it works.

Cam pulls Kayla aside and he tells her he doesn’t want to be made a fool of. This conversation basically goes nowhere and Cam goes back into the house to confront Kwasi, who quickly turns into Kwasi Beast and throws himself across the room to attack Cam. We end the episode with the guys holding Kwasi back and me imagining the tongue lashing they’re going to get from Papa T.

See you all next week!