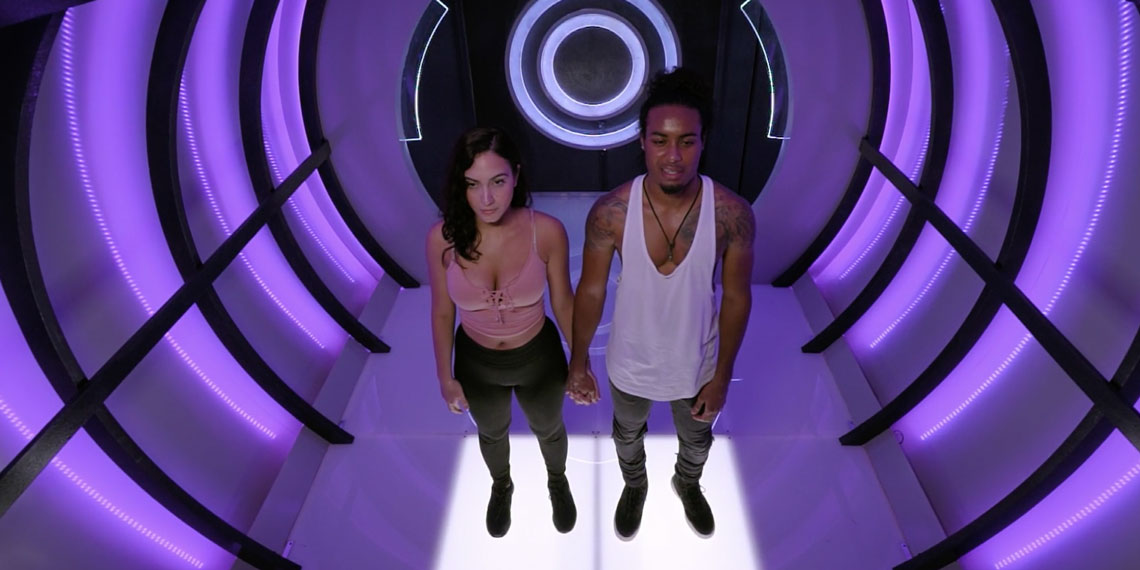 ‘Are You The One?’ Recap: Fate Intervenes

Hi friends! Welcome back to another week of Are You The One: We’re Tricking Morons Into Believing Fate is Real. Shall we dive right in?

We’re back at the house right after the matchup ceremony, and immediately this show is testing my very shaky sanity because we have Zak and Bria both claiming they are officially done with one another.

In an attempt to prove they are over each other, Bria declares she has respect for herself and then immediately licks chocolate sauce off another girl’s crotch, while Zak unsuccessfully tries to make out with Sam in the pool. Sadly for Zak, Sam was born with the entirety of her brain intact and she figures out he’s just trying to make out with her to piss Bria off. Who, him?! Poor, innocent, misunderstood Zak?! Never!

But seriously, let’s keep our eyes on Sam here. She’s literally the Stephen Hawking to these court jesters.

Maria and Shamoy are talking about how they’re into each other in the kitchen, and Andrew, the grown man who forgot to put sunscreen on in Hawaii, thinks they are a match. So it’s definitely going to be true.

We move on to a really weird shower scene between Maria and Shamoy. Guys, just take your own shower or shower together. It’s not a hard decision! It’s like when me and my friends are trying to decide where to go to dinner and no one will actually give their opinion and we end up at Chili’s again. Except for in that scenario no one is naked.

We’ve made it to the next morning and no one had to have their stomach pumped. Blessings.

Asia decides to wake up Lewis at 8am after a night of heavy drinking and tell him she made him breakfast. That’s sweet and all, but like, you couldn’t wait until the sun came up? Nobody wants an early riser for the rest of their life. *shudders*. Lewis earnestly tells Asia she’s the real MVP as she spills his coffee everywhere. A little coffee for Lewis, a little coffee for the counter, a little for Lewis, a lot for the counter. A real housewife in the making, ladies and gentleman.

Brett and Cali finally get some screen time and they choose to use it to discuss what kind of animal they would be. Brett says a monkey and I’m just going to assume he means Marcel from Friends because that monkey lived, you know?

Brett also admits he is into Cali and they tell each other something no one in the house would know about them. Brett has had three surgeries, but apparently no haircuts ever. Cali admits to loving spicy food and how it makes her sh*t her brains out; she calls them “spicy poops.” Ah, young love. Is anything sweeter than talking about your bowel troubles? I have to admit I appreciate this conversation between them because at least I don’t have to figure out a new way to write “and then Bria went crazy.”

Over by the pool, Tevin and Asia are chatting. Tevin spills the beans that Kenya gave head to Asia’s beloved Lewis. He says she “topped him off.” Is that what the kids are calling it these days? Needless to say, Asia is pissed. She didn’t top off Lewis’s coffee to have someone else top off his d*ck.

Samantha, Cali, and Morgan are sitting around talking about how they’re into Daniel. Sam says he’s her first choice and she’s really into him because he’s sweaty. SWEATY! SAM. Do you want me to take back all the nice things I said about you?

Terry shows up and reminds them of the fate button. It’s cute how he shows off the fate button like it’s a brand new Kia on The Price is Right. It’s almost like he knows he’ll need a fallback plan when this show is inevitably cancelled after someone dies of alcohol poisoning.

The Devil Fate chooses Lewis, Shamoy, Maria, and Lauren. The whole room is pumped up because they want Shamoy and Maria in the truth booth. How FUNNY and COINCIDENTAL that the fate button chose a couple that the producers want to get in there. Isn’t fate just so CRAZY?!

The date is a horseback ride but it’s super foggy. Is it just me or is this giving off serious Sleepy Hollow vibes? Maybe someone will lose their head!

Lewis is nervous about riding and Lauren tells him he better calm down because horses can smell your fear. And I would remind you so can the homeless man on the subway mumbling about what color you see when you die. And that’s today’s public service announcement.  Anyway, as everyone who has even briefly encountered me knows, I had a bad experience with a horse named Huckleberry many years ago, so to Lewis I say, RUN! Get out now!

OMG Lauren’s horse freaks out and she falls off, and I am getting serious flashbacks here. Is this f*cker’s name Huckleberry?! I thought he’d be dead by now.

Meanwhile, everyone back at the house and safely on the ground is picking Maria and Shamoy to go into the truth booth.

Maria and Shamoy are enjoying their date and are into each other. She tells him she wants him to be more aggressive. I’m sure this will come back to haunt us all.

Meanwhile, Asia is walking around telling everyone in the house that Kenya gave Lewis a good ol’ BJ. She’s definitely the friend you tell a secret to and say “but don’t tell anyone,” and then she goes and tells everyone she knows.

Sweaty Daniel fashions up some makeshift fishing poles and takes Samantha on a little date to catch crabs with meat. He literally just said “I hear this is the best time to catch crabs.” Ironically, that’s exactly what Sam says to him later when she convinces him to use a condom.

Terry comes in and announces it’s time for the truth booth. To no one’s surprise, Shamoy and Maria are heading to the little shack that will tell them if they are meant to be.

And they’re a perfect match! I’m shocked TBH. Which producer did Maria have to seduce to get that result?

The house celebrates, and I told you that Maria’s directive to Shamoy to be more aggressive would come back to haunt us, as he begins to dry hump her on the couch to everyone’s delight. And this is the part where I clawed my eyes out so I’m gonna have to end this recap right here. Bye!

Cali screams out “You know what this means? This means that fate is f*cking real!” And that’s how I know they’ve all drank themselves into brain damage.

Brett and Cali make out in the hot tub and then Cali briefly goes inside, I assume to have a spicy poop, and when Brett comes in he sees her talking to Zak even though she was supposed to come back out to the hot tub. What he doesn’t hear is that Zak literally just told Cali that she reminds him of his sister. Which I think means he’s not hitting on her? Unless he thinks his sister is hot. Can someone pls confirm?

Brett immediately loses his sh*t and starts screaming at Zak and Cali.  Lol I appreciate that Cali is straight-up like “I’m pretty drunk so I forgot I was supposed to meet him in the hot tub.” Same girl, same.

Brett and Cali start yelling at each other, but no one is making much sense because they are both very inebriated. Brett tells us in the confessional that he doesn’t usually lose his cool, and I believe that as much as I believe myself when I look in the mirror  in the morning and say “today is going to be a good day.” Especially since I’m staring at the words “The Jealous Type” right under his name. The jealous ones are never the chill ones. The jealous ones are the ones that are incarcerated.

Cali continues to call Brett “Zak” during this argument and I’m distressed because we do not need Zak’s ego getting any bigger at this point.

We’ve made it to the morning and Brett is feeling a little stupid over what happened the night before. I’ll tell ya what Brett, get yourself a pork roll, egg, and cheese, and verbally abuse yourself for about 7-9 days and that guilt will clear right up. Trust me, I know.

Outside, Tevin is trying to clean up the mess he created. He’s admitting to Kenya that he told Asia that she hooked up with Lewis.

Tevin: I think I might have started some sh*t
Me:

Lewis pulls Asia aside, because he doesn’t really understand why she’s so pissed. Kenya comes over and starts yelling at Asia, so naturally Lewis invites her to sit down. Asia is basically mad that no one ever told her the two of them hooked up. Kenya tries to defend herself by saying “well it wasn’t romantic it was just a blow job.” Did she get that line from my ex?

Kenya claims that Asia never told her or Lewis that she liked Lewis in that way. And Lewis is just sitting there with these two hot girls fighting over him like this:

Lewis is just now realizing that perhaps Asia has feelings for him and he’s not sure she’s his match, which basically just means he wants to swap bodily fluids with more girls in the house before settling down. When we leave the convo all is well between Asia and Kenya. And now we have finally have world peace!

We’ve made it to the matchup ceremony, and Terry is thrilled because these dummies have figured out a perfect match. Ryan Devlin would never show so much emotion about something so stupid, Terry. Pull it together, man!

This week the guy’s pick their perfect matches, and I’m sure they won’t f*ck this up at all.

Lewis picks Asia. Now that she’s wearing an outfit that shows off her labia I guess he’s finally into her? Asia then tells Terry about the Kenya and Lewis hookup because he’s the only person on Earth besides her mom’s sister’s cousin who she has left to tell.

Brett is next, and I swear that thick hair is cutting off the oxygen to his brain. He picks Cali, but she’s clearly not over the other night. The whole exchange goes like this:

Brett: My perfect match is Cali.
Me: Cool cool cool.

Moe picks Nutsa and she complains that all he does around the house is clean and cook and I’m wondering how that’s a bad thing? Like, could Moe come to my house pls? I’ve got pizza boxes that aren’t going throw themselves out.

The crew gets three beams again (including the perfect match beam of Shamoy and Maria) and Papa Terry is not pleased. But he does have a surprise for them. Terry announces that instead of four people going on a date next week, they will all be going on an overnight relationship rehab, which I’m pretty sure is just code for a bang fest. Everyone heads back to the house to pack their lingerie, whipped cream, and condoms.