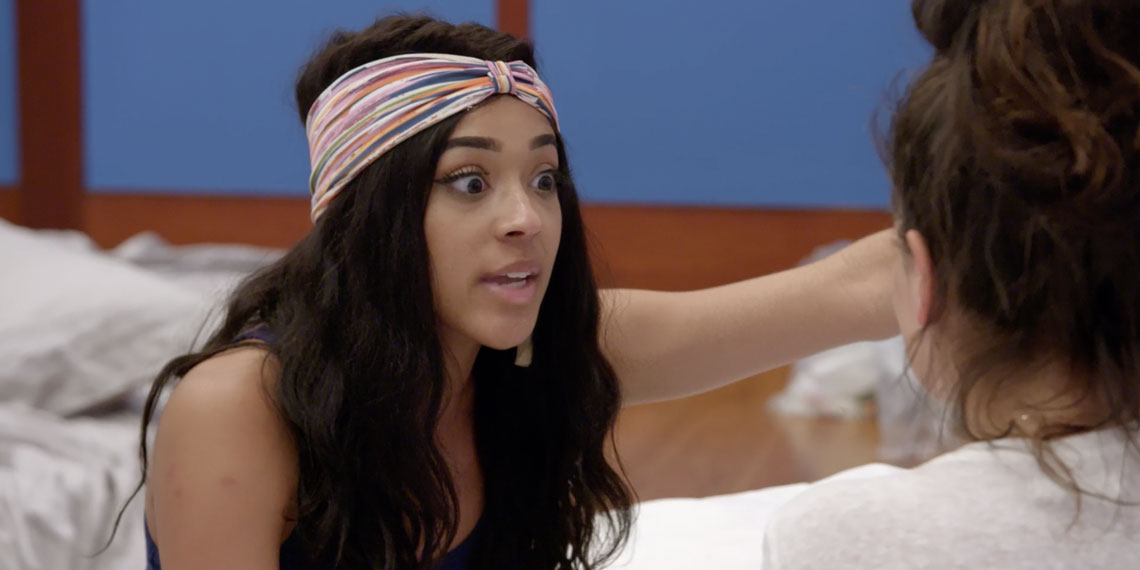 ‘Are You The One?’ Recap: Andrew Forgot His Sunscreen

Hi friends! We’re back for the Are You The One season 7 episode 3 recap, and I, for one, am on the edge of my seat. Will Zak continue to hit on every girl in the house? Will my eardrums sustain permanent damage from Nutsa’s voice? Will Bria skin Zak and wear him as a suit? Let’s find out!

We open on Bria screaming, and already I’m traumatized because I had a rough subway ride home today. It also involved a lady screaming “you can suck my dick!” Although in her case, I think she was just trying to get me to give her money. Bria is actually insane.

In the other room Nutsa is telling Zak he deserves better than Bria, and in the confessional Morgan is telling us that Nutsa isn’t right right for Zak. There is some major girl-on-girl crime going on here.

Asia decides to spare us all a reenactment of the red wedding, and attempts to give Bria a pep talk. She tells her she needs to move on from Zak and will physically not let her back in the house until she calms down.

Bria is grunting and heavy breathing like someone deeply in need of an exorcism as Asia leads her back to the house. She crab walks right up to Zak.

Bria: *voice dripping with depression and sorrow* Listen to me, it’s done
Zak:

Moving on to our second most f*cked up couple of the house, Tevin and Kenya. Tevin is whispering to Kenya, asking what she did in the boom boom room with Lewis. He says he’s whispering to preserve his voice, not because he wants to keep their sexual exploits private or anything.

It’s all highly disconcerting. They leave this conversation agreeing they are still into each other, but only one of them leaves with vocal chords that are fresh as a daisy.

Bria is icing her hand because she injured it in one of her rage blackouts. She is also wearing Zak’s shirt even though I THOUGHT WE WERE DONE WITH THIS, GOD! Samantha tells Zak that it’s basically like a dog peeing on something to mark its territory. Oh, Sam. I’m sure Bria did that too!

Okay now Sam is talking about how she and Zak are similar and she thinks he might be her match. I’m starting to wonder what it is about this dude that makes him female kryptonite? Is he actually a slice of pizza underneath his clothes?

Sam thinks they connect intellectually, and I’m wondering if they’re not showing us the parts of the day where Zak walks around reciting Yeats from memory cause otherwise I DON’T SEE IT.

Now we transition to Andrew, who is declaring that everyone has made a connection and there are a lot of playboys there and he just doesn’t have that game. You mean the ladies aren’t impressed by the diamond studs in each ear, Andrew? I am shook!

Andrew is using the precious few minutes of screen time he has to talk about the weather with Asia. Apparently he got sunburned because it was overcast out and he “just didn’t think.” Well, Andrew, us fair-skinned folk need to be vigilant about the sun. Always wear sunscreen! Melanoma does not discriminate, although I’m sure it would pass over your diamond-studded self if it had the choice.

I honestly never thought I’d say this about someone on this show, but Andrew definitely needs to consume more alcohol. This conversation is so awkward and the only way to get past that is by drinking so much your ability to feel shame goes away.

Morgan is letting Nutsa do her makeup even though they are both crushing on Zak. Morgan better watch out because Nutsa has a crazy look in her eye and a lip liner that looks suspiciously like a shiv.

Morgan immediately runs from her conversation with Nutsa to tattle on her to Bria. She tells Bria that Nutsa is petty but she is GREAT AND PERFECT AND WILL BE PURSUING ZAK. And isn’t it honorable that she’s telling Bria before she does it? In the confessional, Morgan lets us know that she told Bria about her crush on Zak because she’s afraid of her. Same.

Morgan goes right over to Zak and greets him vag first. He accepts with open arms.

Morgan tells Nutsa that she went to Zak to tell him to respect her. Then she tells us in the confessional that she lied. I’m very into Morgan’s use of the confessional. She knows what it’s about. Also she might want to avoid everyone from the show now that this is airing. Save yourself, Morgan!

Can I just take a brief moment here to discuss the living accommodations MTV provides for the cast members? It’s literally mattresses thrown on the floor with a comforter on top. They look like they’re squatters. Did MTV even pay for this house or did they make the cast members break into a vacation home that wasn’t currently being rented?

Cut to Cali and Brett in some sort of khaki-colored hammock contraption. I’m having a hard time figuring out what’s going on here because everything is the same color. The people are tan, the hammock is tan, Brett’s shirt is tan. I think they’re making out. They seem to like each other. Cute.

Terrence J shows up. Is the J an extension of his first name, or is it his last name? Do we think I can drop it by now? Is Terrence too familiar for a man I’ve never met? Eh what the heck, let’s go with Terry.

Terry shows up. He reminds them that one week and seven hangovers ago they got three beams at the matching ceremony. Papa Terry was very proud. He shows off his beloved, the fate button, which will again pick the dates this week.

The producers Fate picks Nutsa and Asia as the women going on the date. For the second week in a row, Bria threatens the life of the fate button if it picks Zak. I really fear this this button is not long for this life. Luckily, the fate button is spared this week because it chooses Cam and Andrew. Don’t forget your SPF 50, Andrew!

So for this date they are zorbing. Zorbing is a word I just learned that means rolling around in a plastic ball like a drunken hamster. How nice of MTV to send the cast to Hawaii and let them do something I could do at I Play America in central Jersey. Really spending the big bucks! I hope someone suffocates.

Nutsa spends the day telling the boys she’s not into them. Gentlemen, this is a blessing. You don’t need that voice in your life.

Oooh now I see what Andrew was talking about with his sunburn. That baby’s gonna peel. A pink-tinted Andrew tells Asia he would be interested in her if he saw her walking down the street. Asia says she thinks he has a wallflower personality and is wary of him because he seems shy. Wow, I never knew shy was a dealbreaker. So ladies, we’re into rage issues, cheaters, and unemployed losers, but we draw the line at shy? This is where we are now?

Andrew convinces Asia that he would never be so disgusting as to be a shy dude, and she believes him enough to think they might be a match.

Back at the house, Terry is there to announce who is going in the truth booth. Asia and Andrew admit they’re feeling each other, and the house thought they might be too. They’re headed to the Truth Booth.

And it’s no match! Looks like Andrew was lying about being shy and the experts just blew up his spot, huh? They seem a little upset at first but then Andrew starts yelling “That’s information! That’s information!” which is basically what I do after every late-night Wikipedia deep dive.

Post-Truth Booth, Kenya approaches Jasmine for saying she would pop off on her. I must have missed that part, but apparently it’s a big issue. Kenya screams at Jasmine and then peaces out. Jasmine trying to calm herself down right now is me after anyone asks me to do a simple task at work. I ALREADY TOLD YOU TO ADD YOURSELF TO THE DISTRO LIST, LINDA!

Nutsa pulls Zak aside and asks him what he likes in a girl.

He also mentions he wants a woman that’s loyal. So loyal like you were to Bria with Morgan and Nutsa and Samantha, like that kind of loyal? Nutsa eats it right up and says she thinks they could be a match.

Bria then comes in and pulls Zak away from this sweet conversation and legit pulls him into the boom boom room and jumps his bones. Oh so like this kind of loyal, Zak?

Nutsa then asks Samantha where Zak is.

Samantha! I want only good things for you! My kindred spirit.

Before Bria lets Zak leave the boom boom room, she squeezes his balls until he says she can trust him. I believe Zak about as much as I believe myself when I say I’ll come out but just for one drink.

We have finally made it to the second match-up ceremony, and no one is dead yet! That’s how I’m measuring success on this season. Who even cares if they get the million dollars this year? At this point if they all make it out alive I’m calling it a win.

Tonight is ladies choice! So many eligible bachelors, how will they ever decide?

Terry remembers at this point America’s favorite host Ryan Devlin would start stirring up shit. So he asks Tevin if he would prefer to be standing up there next to Jasmine. Tevin’s mouth says he’s “happy” but his eyes say “call the police.”

Bria says Zak has been talking sh*t on all these girls that like him, and he even dared call  Nutsa “ditzy.”

Zak then calls Bria trash, which is funny because I was just thinking the same thing about him. Also can we get a rewind to about 5 minutes ago when he said she could trust him?

Sam still picks Zak, and I hope this is all some sort of elaborate John Tucker Must Die plot.

Sidenote: I do appreciate that Zak is playing the game. The whole point of Are You The One? is to get to know the other people to find your match. But Zak, you do not have to promise every girl you won’t hook up with anyone else. No one has a gun to your head! Sorry. Only Bria has a gun to your head! Just be open and honest and let the ladies know you want to swap bodily fluids with everyone, mmkay?

They get three beams again! Terry is already scolding them because they didn’t do better than last week. The gang heads back to the house to “get to know each other” and I head back to my dark place, attempting to come to terms with the state of the singles left in the world.

See you fools next week!