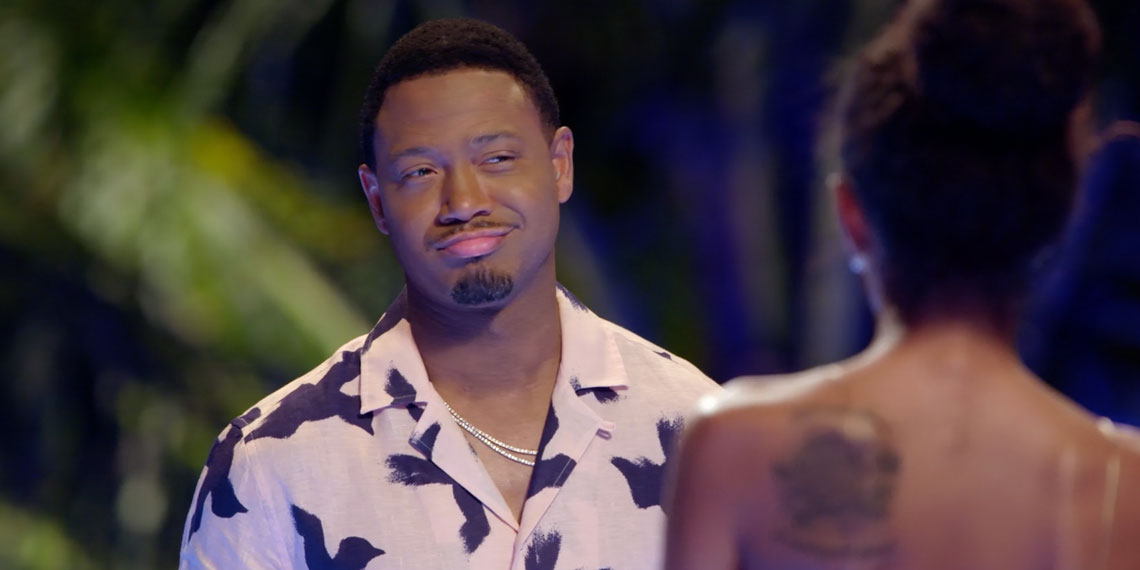 ‘Are You The One?’ Recap: No One Has Any Idea What They’re Doing

Hello, friends! Welcome back. You know what time it is! Time for me to spend hours finding creative ways to say “and then they got black out and hooked up.” Let’s see what I come up with this week, shall we?!

We immediately return to the truth booth, scanning Tevin and Kenya for STD’s to see if they’re a match. And they’re a perfect match! The crowd goes wild! Kenya climbs Tevin like a tree! The heavens sob and say “we didn’t mean for this to happen.” True love is dead.

Okay serious question though. Kenya went on this show because she is bad at finding love, right? She needed matchmakers to help her find her perfect man. And the man they picked out for her…looks exactly like her ex-boyfriend? How does this make sense?

In honor of their second perfect match of the season, the gang decides to party. Kayla declares that “love is in the air! It’s everywhere!” No, honey. I think that’s someone’s bodily fluids.

All the girls are asking Kenya the secret to love, as she is now an all-knowing love guru who definitely didn’t suck someone else’s d*ck while dating her perfect match. Kenya tells Sam the key is to “be vulnerable” and Sam is skeptical. Remain skeptical, Sam. Do not trust Kenya. She is a fugly slut.

The next morning, Kwasi sets up a picnic for Jasmine to show her how much he wants to bang her cares about her. And by sets up a picnic, I mean throws some producer-paid-for champagne in a basket to loosen Jasmine up. Kwasi asks her “so, will you be my girlfriend?” which was mildly cute but follows that up by saying he “still has the beast in him” and I’d like to nope right out of this conversation.

In the kitchen, Sam is making food for Daniel. I’m sorry, but is she cooking frozen french fries in a skillet? Is that a thing? I wouldn’t know because I haven’t touched a pan since Seamless was invented years ago, but it still feels wrong. Chefs, hit me up in the comments pls.

Now it’s time for the matchup ceremony. Papa T and his bird shirt welcome us and remind us that they are here to find love and sell their souls to the reality TV devil to win one million dollars. It’s the ladies’ week to pick.

And the gang gets four beams! The two perfect matches that they already know, and two new matches. They all hang their heads in shame. Papa Terry is upset, and he reminds them they only have 2 more weeks to get it right. Papa T won’t yell at them, though, he will just stand solemnly by and let Maria ream them out. Things sure must look easy from that honeymoon suite at the motel six, huh Maria? After that light verbal abuse, Papa T sends them back to the house to do work.

The entire gang wants to strategize when they get back, in hopes of salvaging what is left of this sinking season.

Cali during this whole interaction:

And then Morgan goes and bangs Zak in the boom boom room. I swear, Zak is the luckiest man alive.

In the morning, everyone finds out and they’re all pissed and claim Zak’s ruining the game. Asia is also pissed at Morgan and is screaming at her for banging someone who she thinks isn’t her match. Alright Asia, can you stop bullying people for like A SEC and maybe find your own match? Mind. Your. Business.

Papa T shows up and reminds them about the fate button with a giggle. At this point in the season even he can’t say it with a straight face, and he spent many years training at Juilliard for this very moment. That’s how dumb it is. Fate picks Jasmine, Samantha, Cam, and Tomas to go on the group date.

Tomas is already a negative Nancy, convinced neither of these girls are his match. What lucky ladies to be on a date with this charmer!

Sam and Cam get to talking and they realize they could be each other’s match. And I hope they are, because there’s nothing I love more than a rhyming couple. Just ask my best friend Devon and her husband Kevin. It’s precious.

Now Cam is talking to Jasmine, and I actually think these ladies are lucky to be on this date because they got Cam. So you can go shave your back now, Tomas.

They all get back together in the house and Papa T wants to hear about the dates. Cam admits that he and Jasmine did kiss and now the Kwasi beast is roaring. Papa Terry doesn’t care because he’s just so happy people are opening their hearts!

The group voted Sam and Cam into the truth booth. Every time I type this I want to write trooth booth so my apologies for any typos you’ve noticed over the course of this season. Sam and Cam head on into the booth and they want to see perfect match because duh, MONEY. They know no love they find with a fellow trash bag on MTV will ever be worth more than the couple grand in their pocket if they win.

And they’re not a match! Truth Booth: 1, Rhyming Couples: 0. Everyone is ready to black out again!

After the truth booth, Jasmine apologizes for hurting Kwasi’s feelings, but she does not apologize for playing the game. She starts crying and says she didn’t want to put “all her pebbles in the same f*cking thing,” which is DEFINITELY the correct phrase. Kwasi can not forgive her because he has a myriad of issues, especially ANGER.  He leaves Jasmine there crying, and Nutsa, the brightest light in a lacy bralette, comes to give her a hug and cheer her up.

Kwasi ends the night screaming and losing his sh*t, sobbing outside into the lap of a producer wearing bunny ears (?). Guys, did I just accidentally take shrooms or is this something that actually happened? I guess we’ll find out next week!