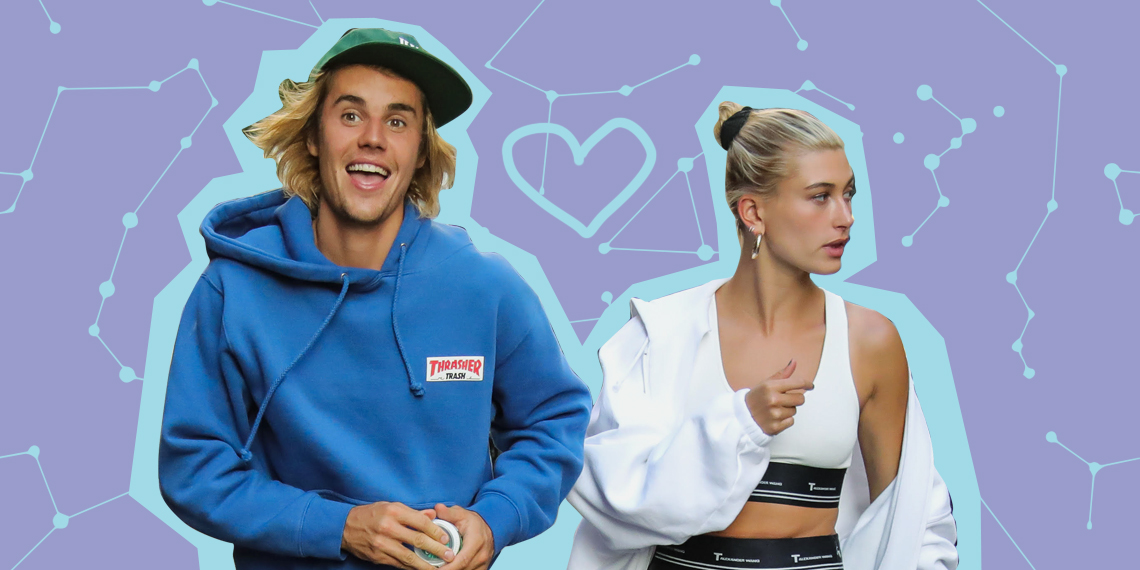 Am I the only one who can’t seem to process the fact that Justin Bieber and Hailey Baldwin are in fact husband and wife? Is this some sort of sick joke? OK, cat’s out of the bag, betches. I am obviously a ride-or-die Jelena fan, and well, some of us are still hoping this wedding falls under the fake news of 2018 bucket. (I can’t be alone here.) However, from the looks of it, the Bieber-Baldwin newlywed PDA is just as real as it is obnoxious. OK, I’m done being a Debbie Downer. Let’s cut to the chase, and talk about the astro compatibility of these two love birds, because believe it or not, it’s a vibe.

For starters, let’s get one thing straight, and it’s that we can’t judge a book by its cover. As you know, Justin Bieber was born under the dreamy sign of Pisces, and Hailey Baldwin has her sun in the sign of the adventurous archer. Right off the bat, we know that these signs aren’t compatible, considering water (Pisces) and fire (Sagittarius) don’t typically mesh well by nature. That’s not all we should be taking into consideration, but sadly, we don’t have Baldwin’s time of birth. (Not to worry, betches. We’ve got Bieber’s birth time on deck, as per astrotheme, and I’ll get into that in a minute.)

In the meantime, let’s go over the basics. Pisces and Sagittarius are both mutable signs, which means Bieber and Baldwin do in fact have some similarities, in the sense that they’re both adaptable, changeable, and prefer going with the flow. However, keep in mind, looking to see if two sun signs are compatible is merely scratching the surface. Nevertheless, the newlyweds are both ruled by expansive Jupiter, and this caught my attention from the very beginning. Lucky Jupiter rules Sagittarius, and it’s also Pisces’ traditional ruler in astrology.

Since we don’t have Baldwin’s birth time, I have to point out that the 22-year-old model was born on the very first day (and degree) of Sagittarius. TBH, she very well might have been born on the last degree of Scorpio, considering the sun changed signs on her birthday. Either way, she’s still a Scorpio-Sagittarius cusp, and FYI the Biebs has a sh*t ton of Scorpionic influence in his chart. Although, going back to these two being children of oh-so-gracious Jupiter, there’s really nothing this celebrity couple wouldn’t do together. Their contagious optimism is constantly flowing, and their larger-than-life personalities clearly thrive off the PDA.

The Dark Side Of The Biebs

Word. Now let’s talk about the Biebs for a second, because this Pisces is a lot more complex than you think. For starters, he was born with a smoldering Scorpio rising, AKA ascendant, conjunct his Pluto and North Node in Scorpio. Holy sh*t and a half. Intense is an understatement, betch. FYI: Pluto rules Scorpio, so having this sexy Voldemort planet sitting directly over his Ascendant, only magnifies its power. There’s more. His Pluto is also sitting alongside his North Node, which represents his “spiritual path,” in this lifetime. One thing’s for sure: themes related to power, transformation, sexuality, sacrifice, karma, and universal compassion are prominent themes in Justin Bieber’s life.

The Biebs has definitely gone through some intense rebirths, and TBH, marrying Hailey Baldwin still feels like a Scorpio rising fixation (or perhaps revenge?), but again, that’s just the vibe I get. On another note, Bieber most definitely benefits from Hailey’s Sagittarius-like qualities, considering Pisces’ energy naturally struggles with taking initiative, and getting things done. In other words, Baldwin’s fiery energy most definitely compliments Bieber’s ambiguous waters. Also, as per astrotheme, Hailey’s sun conjuncts her Pluto in Sagittarius, which means she, too, has an air of Plutonian mystery to her, which obviously drives Bieber wild.

Besides, who are we kidding? Hailey Baldwin is hot AF.

Bieber’s sun in Pisces is directly opposed Baldwin’s Mars in Virgo, which can definitely cause some friction in the relationship. The sun is proud and Mars asserts itself; meanwhile, both of these planets are at odds. Now, this could also ignite a surge of passion, but those red-hot feels could also spark disagreements within the relationship.

Moreover, these two have something extra cosmic, in regards to their compatibility, and it’s called a Moon-Venus conjunction. Baldwin has her Venus in its home sign Libra, and the Biebs has his moon in the same sign. FYI: Venus thrives in the sign of Libra, as it is its sign of rulership, and the planet of love, beauty, and relationships. The moon, however, represents our emotions and sense of nurture, so can you imagine the deliciousness of Moon-Venus in Libra? TBH, I dare to say that this aspect is what ultimately sealed the deal. Aside from their Jupiterian love story, of course. Thanks to this, these two have no issue showing affection towards one another, let alone connecting on an emotional level.

You could be the judge of that.