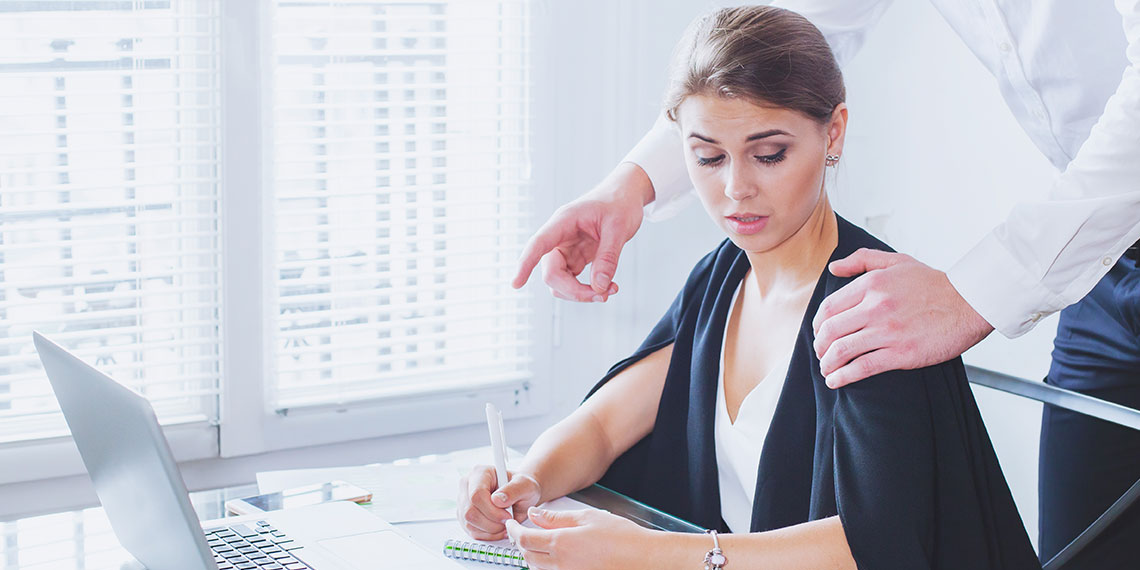 The past few months have been big for change. Companies have been called out for systemic racism. The Supreme Court gave LGBTQ workers federal civil rights. Sexual predators are having a renewed #MeToo moment. Powers-that-be are being held to account. That’s phenomenal for social progress. It’s also horrible for workplace sexual harassment.

Sorry to be the bearer of bad news (amidst an already heinous 2020), but you’ll want to beware of increased sexual harassment when you’re on the job, as harassholes hate this new world.

Here’s the skinny: Workplace sexual harassment is a power play. Basically, harassers are insecure people who want to make you feel small because they find you threatening and/or seek a power boost.

Don’t get it twisted, though: Sexual harassment doesn’t have to be sexual. What matters is that you’re being targeted because of your gender or sexual identity.

Harassholes may try to “put you in your place” by using typical sexualized come-ons, like ogling your goodies in the office, jumping in your DMs to ask you out for the umpteenth time, or promising you a promotion in exchange for a Netflix and chill. Or, harassholes may leverage hostile put-downs that humiliate you, like calling you crude names on conference calls, cutting you out of morning meetings, berating you for not dressing the way a woman “should” dress. The displays of disrespect are limitless.

Now that our new world is pushing for greater respect for marginalized persons, women included, harassholes see our world as a less hospitable place for their antics. They’re frustrated about not being able to mistreat you and others with impunity, and they’ll try to reclaim their sense of power by stepping up their harassment game. Protect your purse and your mental health by being prepared.

You may be a butterfly, but harassholes aren’t very unique. They tend to have shared traits, among them being gender. Men make up some 90% of harassholes. In addition to that, they’re more likely to embrace these characteristics:

⭐︎ Believe men and women should be segregated

You can spot these traits by listening to what a harasshole says about gender and sexual identity. For instance, harassholes often think men are better suited for traditionally male jobs and leadership positions whereas women should be in “pink careers,” stay-at-home moms, or in supporting roles. Harassholes use activities and terms typically associated with women to demean other men, such as calling a man a “pussy” or promising to wear a dress in public as part of a bet. These are the dudes who use stereotypes about women as punch lines.

The thing is, there’s nothing funny about harassholes. Keep an eye out for them and remember—just because someone isn’t a harasshole to you, doesn’t mean they’re not harassing another colleague. Harassholes are shady shapeshifters.

Your records of what happened are essential to beating workplace sexual harassment. Why? Memories fade. Plus, there’s a 99% chance that the harasshole (and your employer) will lie. Avoid the he said, she said situation by documenting what went down. On your personal computer or encrypted email, maintain a log of the who, what, when, where, and how of the experience like you’re writing a bland yet detailed screenplay. Also, attach supporting documents such as text messages, emails, DMs, and notes.

You’ll want to have it all, especially if you ever need to speak out or if you suffer retaliation. Documentation can make the difference between getting the heave-ho with nothing and getting out of a company on your own terms with solid references and a strong severance.

Pay attention to that still small voice that echoes within when you’re uncomfortable. Never try to override your instincts with rationalization. You know what you’re sensing, what you experienced, and what you need not tolerate. Don’t ignore it.

Do ignore gaslighting and shade-throwing coworkers. As much as I hate to say it, research shows that some coworkers will try to discourage you from speaking out about sexual harassment and many will distance themselves from you for fear of being mistreated by your employer too. That’s a bummer. But it doesn’t mean you should “take one for the team” by keeping quiet. Real friends won’t insist you be disrespected and won’t try to deny your reality.

Stick close to your instincts, demand to be treated with respect, and do you. You may not be The Boss, but you are a boss and you deserve to work in a harassment-free workplace.