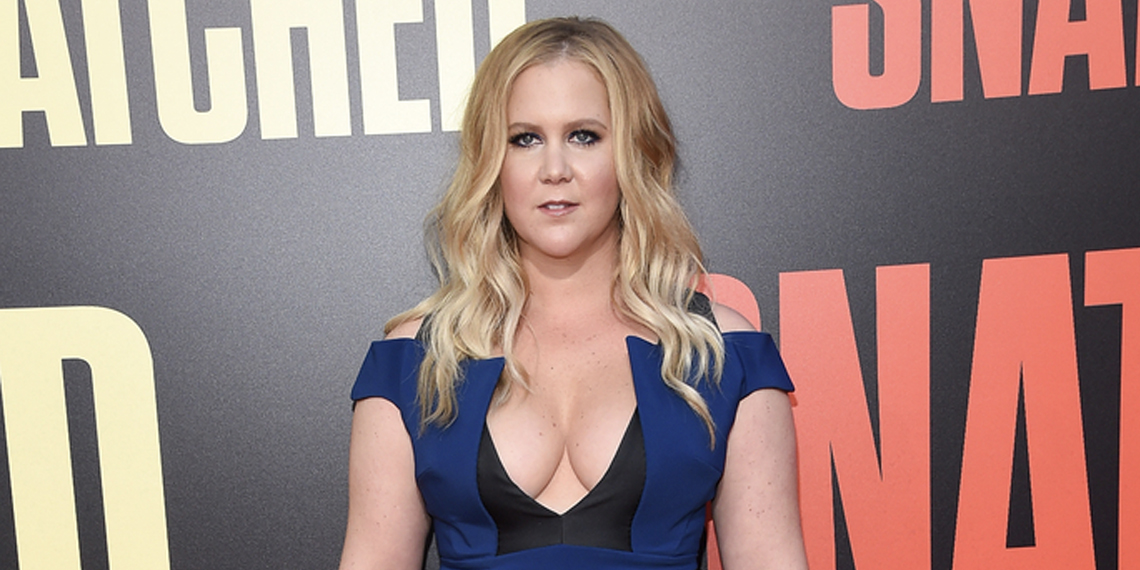 I actually can’t believe I’m typing this right now, but Amy Schumer is married. Like, there was a wedding and people came and now she has a husband. I need to say it again: Amy Schumer is married. Sorry, I’m still working on collecting my thoughts, as you can tell. While we’re still living our trash lives like her character in Trainwreck, Amy tied the knot on Tuesday with Chris Fischer in Malibu. If you didn’t even realize she was in a relationship, join the club.

The wedding came just three days after the first public confirmation of their relationship, when Amy posted a picture of the two of them kissing on Instagram. The photo was most likely taken at Ellen DeGeneres’ 60th birthday party, which I really feel like I should’ve been invited to, but whatever. Amy and Chris have only ever been seen in public together twice, once at a dinner last fall, and once in January when they attended a taping of Saturday Night Live. Basically, they did the relationship version of how Kylie did her pregnancy: super secret, with no social media, and then BAM. Amy was previously dating Ben Hanisch, who she met on a dating app. So basically, you won’t marry the dude from Tinder, but you might marry the dude after the dude from Tinder.

Happy Birthday @theellenshow thank you for having us!

So because we’ve had so little time to get oriented, here are five important things to know about Chris Fischer, the guy Amy Schumer is married to. (Still sounds weird.)

1. He’s A Chef And Cookbook Author

Tbh Amy might only be with him for his cooking. He won a James Beard Award (like, super prestigious) for his cookbook The Beetlebung Farm Cookbook: A Year of Cooking on Martha’s Vineyard, which sounds bougie AF and we’re into it. This is 2018, so it’s only right that a man cooks for a woman every once in a while. Or all the time #gendereequality.

2. He Grew Up On Martha’s Vineyard

Is it just us, or does growing up on a tiny island 100 miles off the coast of Massachusetts have to mess you up in some way? Chris’ family has been living on the Vineyard for 12 generations, and I’m no genealogist but that has to be what, like 1,000 years? I really just need to know, does this Vineyard have a lot of wine?

3. The Obamas Love His Restaurant

Fischer’s restaurant Beach Plum is located on Martha’s Vineyard, and it’s attracted attention from some pretty A-list guests. The Obamas are reported to be repeat customers, so like, goals. If we’re ever just casually on Martha’s Vineyard, we’ll make sure to stop by and hopefully catch a glimpse of Amy digging for clams out back.

4. His Sister Is Amy’s Assistant

Reportedly, Amy Schumer’s personal assistant is Chris’s sister, which probably explains how they initially met. Okay, but isn’t that weird? Like, is this poor girl responsible for scheduling their date nights? Does she see all their emails? It’s like kind of cute that they met that way, but his sister is probably trying to get the fuck out.

Be prepared for Amy to have like, six to nine children, because Chris is definitely a big family kind of guy. He has said that growing up, it wasn’t uncommon for as many as FORTY family members to gather for a normal lunch. Like, please pause for a second and think about that. I barely have 40 people I would ever eat lunch with, let alone 40 people that I’m actually related to that are all in the same room at the same time. My mind is blown. His family also had a set dinner time at 6:30 every night, which is just a little too stable for me. Where are his daddy issues??

So like we obviously wish Amy and Chris the best with their marriage, even though it’s extremely rude that they didn’t give us more advance notice. Next time, please just send us a save the date! And also an invitation, and a plane ticket to wherever the wedding is, and a hotel room, and yes we will be crashing the wedding.