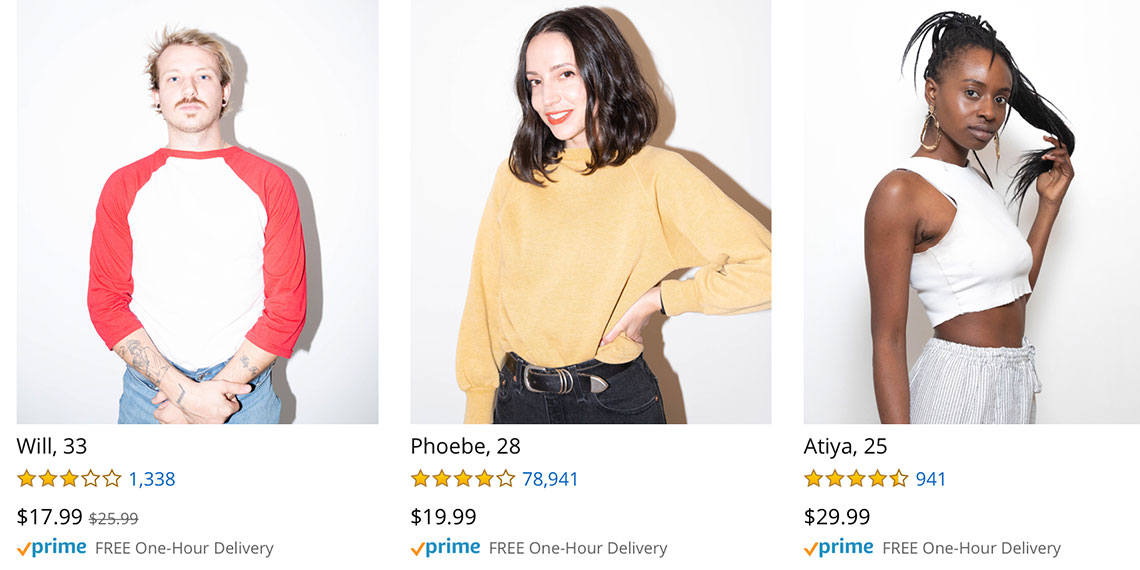 UPDATED: Amazon Has A Dating Site & We Have A Lot Of Questions

UPDATE: Though this Amazon Dating site looks pretty much identical to Amazon.com and Amazon Prime, we’ve learned that it is in no way actually affiliated with Amazon. The freelancers behind it created it only as a way to make fun of the current dating mess that is our unfortunate reality. TBH, I now find this whole thing way funnier and also way more impressive—like, damn, you really had us convinced. And I think it’s a creative idea knowing now that the freelancers behind it have no involvement with Amazon on a day-to-day basis. I’m glad the tech nerds at Amazon are sticking to what they know best (coding?) and that Amazon Dating is the brain-child of people who are original and actually have something to say. Now don’t go getting any crazy ideas, Jeff!

Do you ever wish that the monopolies that control our day-to-day lives could also play matchmaker? Like, Netflix would have a section like, “here’s a list of singles near you who also binged The Office 6,700 times last year? Or Uber could give you a list of eligible bachelor(ette)s within your Uber Pool route? Or that Facebook would—never mind, you know Facebook Dating exists, right? Well, now the latest corporation to try to control your love life is Amazon, with Amazon Dating—well, sort of.

Upon my regular Prime perusal, I discovered that Amazon created a fake dating site called “Amazon Dating.” It’s organized just like Amazon Prime, where you can buy products—or in this case, buy time with people—for a certain price. You can select people based on their “Love Language” and height. It even says “FREE One-Hour Delivery” under each person. Here’s what it looks like:

Omg Amazon, so witty! …except not at all. Firstly, I’m just confused since it’s not even April Fools’ or anything. I kept clicking around looking for answers as to why Amazon all of a sudden decided that dating jokes were in their wheelhouse. But with each click, I felt more confused, creeped out, and embarrassed for Amazon…and for our generation for making this wretched company that owns literally everything feel empowered to make bad jokes. Dating is bleak enough as it is without Jeff Bezos getting involved.

Now, before you go trying to order your next boyfriend off Amazon Prime with two-day delivery, the “About” section of Amazon Dating states, “This is a joke. Amazon Dating was spearheaded by creative duo Ani Acopian and Suzy Shinn and built by Thinko, with help from Morgan Gruer.” Lol, how groundbreaking to literally just take Amazon Prime, sub out those handy paper towels and toilet paper options, and instead place real-life HUMANS in there! Real out-of-the-box thinkers! I wonder how many meetings it took to bring this to life. And how many pitch meetings, which could really have only went like this:

“So I have this idea. We’re going to play a JOKE on our audience that we’ve come out with a dating site. It will have inappropriate undertones and completely objectify the people on it. It’s not really interactive—people will be so confused. And that’s it. That’s the joke.”

So basically, Amazon Dating exists because a couple people who probably get paid more in a year than you’ll make in five got too bored at work. Meanwhile, their warehouse workers are forced to pee in water bottles because they don’t have enough time to take bathroom breaks. But sure, let’s spend company time and resources on a fake dating site.

My favorite question in the “FAQ” section is, “How does it work?”, with the answer being, “It doesn’t.” Cool, we get it, this isn’t a real dating site, but again, what is the purpose? Is it a warning sign? A cultural commentary on the commodification of dating culture?

What would really be funny is if we put Jeff Bezos on there, allowing us to each contribute an imaginary racy text we think he’d send his girlfriend, instead of a boring ol’ review. Now THAT’S a million-dollar idea! You’re welcome, Amazon.

Probably the best and creepiest part is the actual people listed on the site.

Let’s take “Phil.” Phil is 32 years old and definitely is a regular contributor on the r/niceguys subreddit. His reviews are stellar, just take this one!

“By no means am I a sex toy connoisseur but my wife and I have no complaints thus far. We have used it twice and she was very pleased.”

Lmfao, yikes. Also, “Like sitting on several hard lumps”? Did we just body-shame Phil? Phil, you don’t deserve this!

And that’s not where it ends. Here are some other good ones:

“I bought this as a birthday present to my single self in November. Had a good life, really enjoyed, easy to hold. But it died just last month! it was working at like half strength. it was extremely weak and then it died completely. I expected a reliable product but it’s not worth the buy if it dies only a few months later. Very disappointing!”

Okay, first of all, I’ve got to question the motives of anyone “buying” an elderly person to date/have sex with. Also, did she DIE?? This is so f*cking dark, Amazon.

“I finally found a woman that listens and can be controlled. (Just kidding) Excellent product.”

Have I said YIKES enough times yet? Need I remind Amazon, there are men out there who actually think like this. Horrifying.

The funniest part is that if you are really into this idea, you can apply to be on the Amazon Dating site, according to their FAQ section.

I think I’ll just stick to my mom setting me up with all her coworkers’ tragic-looking sons who happen to be around my age, thanks.

I think the bottom line is that while I can sort of appreciate what Amazon tried to do here, the reality is, dating as a millennial is enough of a joke as it is, and if I need a good laugh, I’ll just open up my Hinge recommendations. Amazon, just stick to what you’re good at: delivering my cleaning supplies in two days or less.