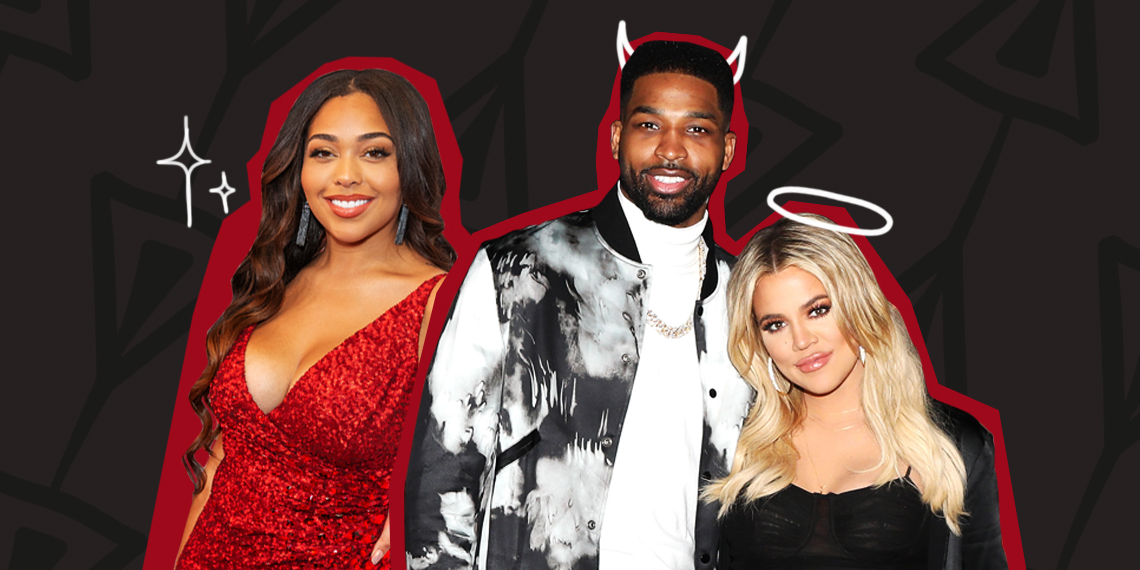 As most Americans with a working Internet connection know by now, Tristan Thompson and Jordyn Woods are currently set up to be the most hated people in America. Khloé Kardashian reportedly dumped Tristan Thompson last night—not, y’know, because he cheated on her days before she gave birth. It’s because he cheated on her once again—this time, with Kylie’s BFF Jordyn Woods. Apparently, Thompson flew into town for Valentine’s Day (aw), but then spent Sunday at a house party “snuggled up” with Jordyn. TMZ reported they were “all over each other” and “making out,” (TBH, grateful we at least don’t have to hear about Thompson “making out, grabbing junk, motorboating” again. As I’m sure Khloe is too.)

Look, no matter what happened, I’m sure we can all agree that Khloé should dump Tristan’s ass once and for all. But given how close Jordyn is to the family (remember that recent series of her and Kylie in blackface matching bikinis?), I’m obviously very excited concerned to see what kind of rifts this incident could cause. Here’s what the Internet has to say so far, and all the hints we’ve gathered that the cheating rumors are true.

#PostAndDelete : #TristanThompson tweets #FakeNews after reports surfaced that he allegedly cheated on #KhloeKardashian with #JordynWoods — He deleted his tweet shortly after ??? — A source close to #JordynWoods is also denying the allegations. We spoke to people close to the Kardashians who says this denials are “cover ups”.

While many of us might take that as confirmation the reports are false, if we’ve learned anything from James Kennedy (or Trump, for that matter), when someone calls something “fake news”, that means it’s incredibly likely to be real news, and furthermore, that there’s probably proof of it. (Otherwise why would his publicist demand he take down the tweet? Famous men have lied their way through worse…)

Confounding this “did Jordyn Woods hook up with Tristan Thompson” sh*tstorm is this recent Instagram from Jordan, but more importantly, this comment by Khloé.

This photo was uploaded two days ago, after the alleged cheating would have occurred, and still Khloé commented “baby girl”. If Jordyn did hook up with Tristan, would Khloé really be commenting cute things on her Instagrams? Then again, if the timeline of the incident is to be believed (which I will get to in a second), this comment could have occurred literally right before Khloé found out about the alleged cheating.

Next up in the “they really hooked up” evidence, we have this incredibly cryptic tweet from Jordyn—posted Sunday, the day she and Tristan allegedly hooked up.

I could love you and still cut you tf off.

In it, she says “I could love you and still cut you tf off.” Which yeah, is one way to announce to your close friends that you’re a cold-blooded sociopath who will hook up with the father of their children at any point. Though in her case, it’s really more the Kardashian/Jenners who have the ability to “cut someone off” here—by which I mean Jordyn is dreaming if she thinks her career is not taking a hit from this. You don’t mess with America’s royal family and come out on top, honey. You can talk to Blac Chyna about that.

While Jordyn and Tristan are busy being shady on Twitter, the Kardashians and their allies are sharing their feelings with another time-honored social media tradition: the telling Instagram comment. In a now-deleted post by Hollywood Unlocked, founder Jason Lee puts forth a pretty damning series of claims about the incident.

#PressPlay One of our contributors was at #TristanThompson’s house party and saw what went down! @kyliejenner we need you to address some thangs with @jordynwoods ? Anyhow, #JordynWoods stayed at his house until approximately 7am. Who needs to go?! Comment below!

In the video, Lee confirms the entire thing. He says one of his writers was there, and reported to Lee that Tristan “took everybody’s phone” (yikes), then Jordyn came in and “was all up in lap,” “ was all over her,” “touchy-feely,” and—the kicker—“you let the girl stay the night until seven in the morning.” Honestly, I’m feeling like this is all the proof I need—and Khloé and her friends seem to agree.

We’re as shook as you are. #CommentsByCelebs

Thanks to Comments By Celebs doing the lord’s work out here, you’ll notice Malika Haqq (Khloé’s BFF) commenting “STRONG FACTS,” Larsa Pippen (another family friend) commenting “Amen!!!” and Khloé herself just adding shouting emojis. If I were Khloé, my entire brain would just be shouting emojis at this point, so I really feel that. Malika goes above and beyond to prove herself as bestie of the year (to be fair, the bar just got way lower), and commented on another post about the situation saying “These hoes ain’t loyal.”

Now THIS is what we call a national emergency. #CommentsByCelebs

So…Malika in, Jordyn out? While Kylie hasn’t officially responded to the rumors yet, a source told E! News that “the whole family is writing Jordyn off,” and adds that Kylie “was in denial for days.” For now, it doesn’t seem like the Kardashians have taken action—Khloé and Kylie still follow Jordyn, and in other mildly suspect news, Jordyn and Tristan don’t follow each other.

And there we have it. Tristan Thompson and Jordyn Woods are over, cancelled, done.  Can’t wait to see what kind of pointed inspirational quotes Khloé posts on her Instagram for the next month, and really can’t wait for a Revenge Body: Part II. (In that one, she gets Hulk-strong and beats the sh*t out of all her exes).