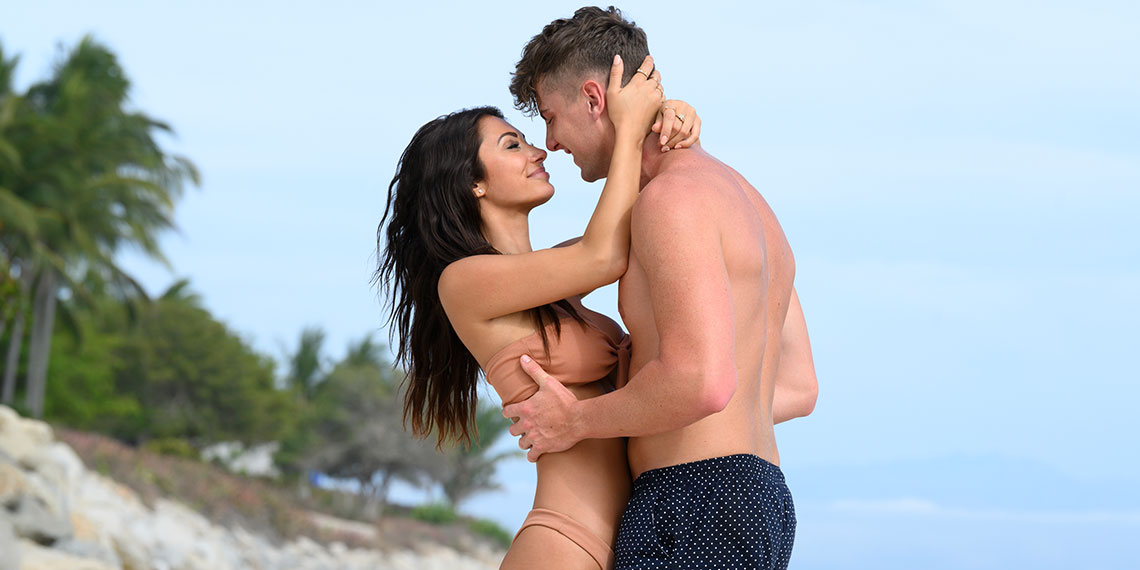 There’s no better thrill in this world than when Netflix drops a brand new series. These days, I’d say that feeling is second only to pretending my computer’s video function is broken during a Zoom meeting so I don’t have to show my coworkers what a disgusting piece of sh*t I’ve actually become during the pandemic. Which is why I was over the moon when I learned that over the weekend Netflix had dropped their newest dumpster fire of a reality TV show: Too Hot To Handle. For those of you who haven’t heard of this show, I urge you to drop the banana bread you were thinking about making and instead dedicate the next 8-10 hours of your life watching human evolution happen in reverse.

The premise of the show is this: 10 hot people from all over the world have been selected to be secluded on a remote beach retreat. They think they’re there to drink-bottom shelf liquor and see how much sand their gynos will have to scrape out of their cervixes after this. Not so! Instead these emotionally stunted circus animals, who have no concept of genuine human connection, have been thrust into this retreat and DENIED SEXUAL CONTACT OF ANY KIND in order to learn it. The phrase “emotional growth” is thrown around no less than 100 times throughout the entirety of the season, which made me think: did any of the contestants actually grow as people? With that in mind, I’ve decided to rank the contestants’ emotional growth on a scale of 1-10, with one being a basic human being allowed to mingle with the rest of society, and ten being someone who remains a dancing monkey.

*Note: Since we initially only wrote our season predictions for the original 10 cast members, those are the people we’ll be ranking now AND I DON’T WANT TO HEAR BOO ABOUT, MMKAY?

I will go to my grave defending this thesis, but here it is: Haley is not a human being. I won’t believe it. I have seen kitchen appliances show more human emotion that this sorority girl from Florida. So it’s not hard to fathom how Haley earned her last place status. In fact, Haley didn’t even make it half way through the season before getting the boot from the animatronic lamp named Lana. I’m sure that will be fun for her to explain to her potential employer. I’d say never change, Haley, but we both know your programming makes you incapable of that!

Francesca is a modern-day enchantress, and watching her systematically bring financial ruin upon her roommates one over-the-clothes handjob at a time was absolutely riveting to watch. Even though 80% of her identifying features are made up of silicone, she was one of the more attractive girls this season, and the men went into an absolute FRENZY upon her arrival at the retreat. She ended up hitting it off with Aussie Harry and they were one out of the two couples to be established during the show. When she wasn’t hypnotizing him with her tits, she was manipulating the f*ck out of anything else with a penis. Francesca gets second to last place because even though she left the retreat with a boyfriend, I’m pretty sure the only thing she learned throughout this entire experience is how much she should actually be charging for her sexual acts. I can’t wait to see what you do in the future, Fran!

Matthew started out the show by claiming he couldn’t date anyone long-term because he doesn’t believe in marriage, even when “long-term” was later defined as “like, four weeks.” With this sad, romantic rock bottom in mind, you would think the only place he could go is up, but after several weeks on the show his idea of having a meaningful conversation was talking dirty to a robot cone named Lana. The single men of America, ladies! Matthew left the show early because it was time for him to move on. But don’t worry, ladies! He says he will be taking what he learned from the retreat and applying it to his future relationships, which I’m sure means he’d be willing to commit to five weeks with one lucky lady instead of four. We’re not worthy!!

On night one, Harry declared that he was below average in every sense of the word, which is why he does so well with women—and that was the lightbulb moment my therapist has been hoping I’d have for years. At first, I couldn’t put my finger on what made him so attractive to me. Why did I so badly want a 6’5″ man-child rocking a modernized bowl cut to call me his naughty little possum?? Who knew that average attainability could be so attractive? I’m ranking Harry in sixth place because even though by the end of the show he was a reformed f*ckboy ready to move across the world to be closer to Francesca, he was sort of manipulated into doing it. I’m pretty sure if a less hot girl asked him to be monogamous, he would have been gone faster than the 20K he spent in the private suite with Francesca.

Nicole had zero hookups, love interests, or quotable lines during her time on the show. In fact, sometimes when she wore her hair curly, I thought a new contestant had shown up on the beach altogether. I was inclined to give Nicole the benefit of the doubt regarding her growth since I can hardly pick her face out of a crowd, let alone recall significant details about her personal life. Then I remembered the one challenge where they painted themselves with the  negative comments people have said about them, and the most insulting thing she could come up with was “skinny.” What other horrors do people say about you, Nicole? That you’ve got a face for modeling?

I struggled with where to put Rhonda on here but, in the end, 4th place felt right. While she did show tremendous personal growth on the show, I’m not convinced that she wasn’t a decent human being to begin with. She seemed to have a good head on her shoulders and only pursued romantic connections with the least douchey men on the island. Congratulations, Rhonda, you aren’t trash!

I think this will be a controversial pick as well, but there’s something about Chloe that has me rooting for her. Though she has the emotional density of a plastic grocery bag, I was actually impressed with her when she cut things off with David after realizing that their connection was only physical, and when she called Francesca out for her two-faced behavior. Plus, she never cost the group more than $12k so that makes her a winner in my book.

This is a man whose opening line on the show was “I’m most proud of my penis” and by the end of the retreat, he was in a committed relationship—without having sex!—and FaceTiming his girlfriend’s kid because it was important to her. If I had a heart, it would have started beating again for this sh*t.

And last but not least, we have British David ranking in at number one for the biggest emotional transformation. When David first graced my television screen, he looked like the type of person who would have spent this pandemic building a bunker out of bulk orders of protein powder and dumbbells. Little did I know that David was a human cinnamon roll hiding in a CrossFit acolyte’s skin suit! When David decided to quit pursuing his romantic connection with Rhonda—a woman who brought him to tears just staring into her soul!!—because he valued his friendship with Sharron too much, I may have actually cried. Though he didn’t end up with anyone by the end of the show, he was constantly lifting his cast mates up and just genuinely being the cutest human on planet earth. David: CALL ME!

And there you have it! The definitive ranking of emotional growth from the Too Hot To Handle cast. Now, if you’ll excuse me I’ll just be sliding into David’s DMs and asking him if he’d like to be my naughty little possum. Ttyl!