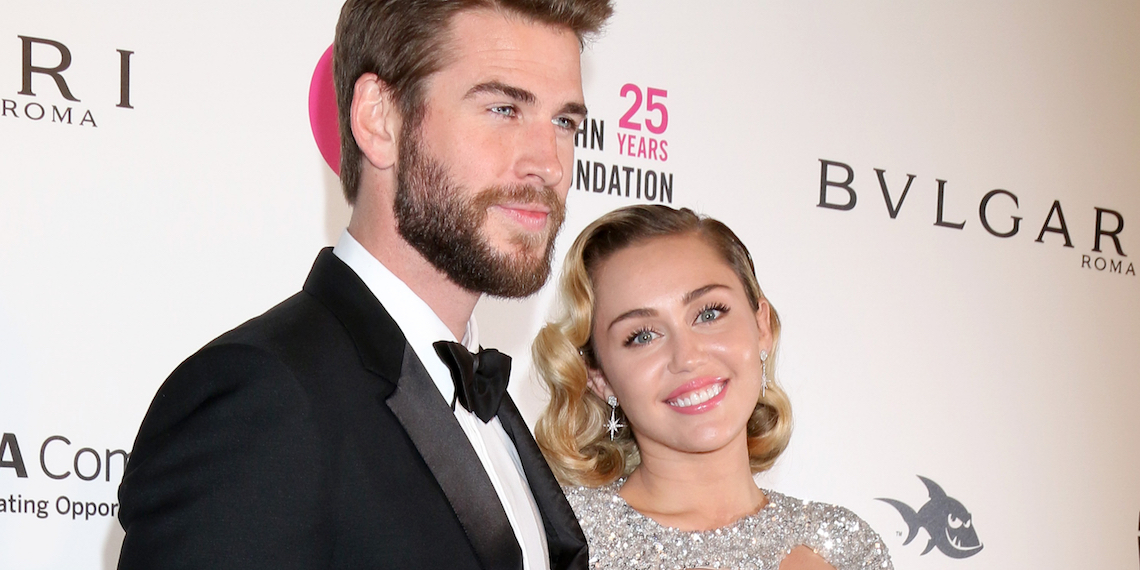 In case you missed it, a Christmas miracle took place last weekend, and I’m not even talking about my mother uttering the words “you were right” in my presence. No, last weekend Miley Cyrus and Liam Hemsworth GOT MARRIED in a private ceremony held in their Nashville home. That’s right, the woman who made twerking a national pastime and the second-hottest Hemsworth brother are married. Are you squealing yet? BECAUSE I AM SQUEALING. I don’t know about you, but I’d say this is definitive proof that you can get your ex back after miming a sex act during your VMAs performance and it’s a win for delusional girls all over the world.

Now, if you’ll recall, the couple met in 2009 on the set of The Last Song, way back when Miley had brown hair and was still legally allowed to associate with the Disney Channel. Ah, simpler times. They first got engaged in 2012, before calling it off a year later so Miley could go through that wild phase.

Sure, Jan. Whatever you have to tell yourself to sleep at night.

But they reconnected in 2015 and seemed to be really happy, despite the fact that it made her new music only subpar. (Sorry, but it’s true.) Personally, I’ve been rooting for these two for a long time. And I’m not just saying that because after a drinking a bottle of moscato I used to drunk dial my ex and belt “Wrecking Ball” into his voicemail box. No, I’m genuinely rooting for Miley and Liam as only a complete stranger with no personal or emotional ties to them can. And now they’re married!! So to celebrate the occasion, I thought it would be fun to revisit her exes in what I like to call “Thank U, Next: The Miley Cyrus Edition.” Let’s get started, shall we?

If you’re wondering who this person is, you’re not alone, because I had to Google him as well. According to his IMDB page his greatest claim to fame is playing Romeo in Taylor Swift’s “Love Story” music video. So basically he’s about as relevant as my Juicy tracksuit Plato’s Closet passed on last weekend. They dated for about nine months when Miley was 15, and broke up right before she went to film The Last Song. Some say they broke up because she rekindled her friendship with Nick Jonas, and I guess 20 year old Justin felt threatened by a 14-year-old boy with a straightening iron, but I think it’s because she realized he was going about as far as Nashville’s Broad Street. Last place for you, Justin.

I have nothing to say about this relationship mostly because I don’t think there was a relationship. There were rumors that Miley and Stella Maxwell were dating in 2015 because they made out a few times in public but, like, what’s your point? If I had to formally acknowledge every person I make out with I would legit need witness protection. Nah, I’m not buying it. This was also the year that Miley and Liam reconnected, so let’s call this what it is: too many vodka crans. Next.

Lol. I know, right? According to Popsugar the two dated for “a day when they were 11 or 12” and a day is all it takes for me to be jealous of any b*tch lucky enough to date a Sprouse. For those of you who read my Riverdale recaps, you know The CW has been making me feel things about a Sprouse that is legit making me question my mental health. And even though Miley only dated the twin whose most successful business venture since The Suite Life has been opening a “meadery” in Williamsburg, I’m still ridiculously jealous.

Technically, Liam was her ex at some point so he makes the list. He’s not number one because although I root for him, there’s someone else who tops the list. SORRY NOT SORRY. Which brings us to my favorite Miley ex…

Nick f*cking Jonas. That’s right, people, I still stan this relationship and I will stan this relationship until either one of them releases a song that’s better than “Before The Storm.” I’m sorry but “Standing out in the rain /Need to know if it’s over /Flooded with all this pain /Knowing that I’ll never hold her /Like I did before the storm”?? F*cking iconic. I don’t care that Nick gave his purity ring to Priyanka Chopra or that Miley and Liam have been together for ten years, 14 year old me is still hoping Disney will pull their contracts out and make them contractually obligated to write another teenage love ballad. PLEASE IT’S ALL I ASK FOR.

But, like, every happiness to you and Liam, Miley!