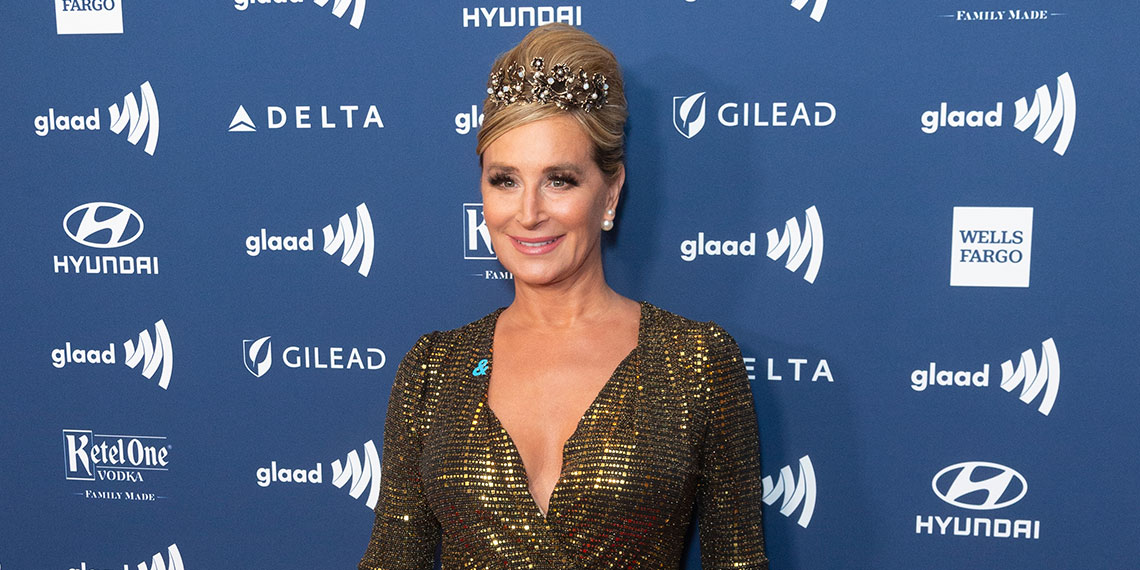 There are so many things I love about watching The Real Housewives franchise that it’s impossible to name them all. (Well, it is possible, but I have a job and a social life that I’d like to get back to at some point.) Besides the goldmine of drama that presents the perfect contrast to my boring life, and the insanely rich lifestyles and fabulous wardrobes that have me crying tears of jealousy, my favorite thing about watching the Real Housewives is seeing them go to embarrassing lengths to chase their dreams. Whether it means pretending they can sing in front of an audience of millions (they can never sing), or slapping their name on the nearest bottle of alcohol, it’s always fun to see what these women will come up with to grab a little more cash on top of their Bravoc checks.  I mean, you gotta have a fallback plan once Andy Cohen gets bored and fires you! And since we can’t all be SkinnyGirl, you’ve probably forgotten about most of these businesses—which is why I’m here to remind you, in all their glory.

Pop Of Color By Kristen Taekman

Kristen Taekman was only on RHONY for two seasons, but she wasted no time diving into the beauty business, launching her own line of nail polish called Pop of Color (inventive name). And by launching her own line, I mean her husband Josh bought her a business. And by bought her a business, I don’t mean paid for her start-up fee for some MLM company, unlike every other girl from your high school who pushes her nail polish wraps on Facebook. In classic Housewives fashion, Kristen’s business venture caused drama, when Bethenny called her dumb for not trademarking the name of her company. I mean, was she wrong? If anyone knows about being housewife with a successful business, it’s Bethenny.

Gretchen Rossi was an all-star OC housewife for five seasons, and she made sure to kickstart her personal brand before getting booted from the show. What started out as a handbag line that was definitely just a manufactured plot line for the show has become a lifestyle brand featuring jewelry, cosmetics, and hair tools. Gretchen Christine Collection was recently acquired by a global portfolio of luxury brands, so hopefully she cashed a nice check to make up for Slade not having a job. She shared the news on her Facebook page, giving full credit to God for the line’s success: “So today and always I will say thank you Lord for blessing me and my business because I remained faithful even during the difficult times.” Yes, God definitely ignored the needs of the poor and sick to help your handbag line become successful. These days, Gretchen spends most of her time Facetuning her baby, and desperately wishing Bravo wanted her back.

Melissa Gorga was not the first Bravolebrity or housewife to attempt a singing career (@Scheana and @Countess) and she certainly wasn’t the last. Melissa’s impending music stardom was a plot line for like, two whole seasons of RHONJ, and it’s wild to remember that she literally performed for Ryan Seacrest. What a time to be alive. The most interesting part of this storyline was actually Joe’s insistence that Melissa not leave the house, prompting him to build her a recording studio in the basement. It’s like Beauty and the Beast, but with sh*tty dance singles instead of books. Low-key, I still listen to “On Display” more than I’d like to admit, so I’m always hopeful we’ll see Melissa return to the studio… which is theoretically still in her basement?

There have quite literally been too many Bravolebrity alcohol brands to count, but not all of them are created equal. For every SkinnyGirl Margarita or Vanderpump Rosé, you’ve got half a dozen brands that once served as a plot line, never to be heard of again. Take, for example, Adrienne Maloof’s red velvet-flavored vodka, the thought of which makes me throw up in my mouth. Marked by an extravagant launch party, at which Adrienne’s soon-to-be-ex Paul dressed up as one of the naked tree statues (2012 was crazy), no one ever really expected this to be a hit. But the final nail in the coffin for Zing Vodka? Chris Brown was the creative director. Lol, I’m f*cking done.

The RHOA alum’s athleisure/jogger/sweatpants collection has basically been in the works since Kim Kardashian was married to Kris Humphries. From hosting a “fashion show with no fashions” to clarifying the launch date as “September/Spring/Summer,” we’ve been waiting on SHE by Shereé for a full decade, and there’s no end in sight. Currently, her website just features a homemade video of Shereé and some models wearing athleisure, and an about page that claims the line is coming “by 2022.” Basically, this sh*t doesn’t actually exist, and it probably never will. Her “Who Gon’ Check Me Boo” t-shirt (which is actually a Hanes shirt, lmao) is listed on the Nordstrom website, but it’s sold out. Classic.

Amelia Earhart, the lost island of Atlantis, the death of Jeffrey Epstein. These are just a few of the world’s greatest mysteries, and Sonja Morgan’s toaster oven might be the most curious one of them all. On the show, we saw Heather Thomson help her with the branding and logo, we saw a photo shoot that involved a prototype, and in 2016, she even told Forbes it was still in the works! Personally, I have my doubts, and I’m not the only one. The RHONY ladies were pretty relentless in asking her about the toaster oven progress, but never really got a straight answer. Let’s just agree that it’s never coming out, and move on with our lives. Sonja has always been a hustler, with other business including her clothing line, her event planning company, and the controversially-named Tipsy Girl Prosecco debuting to varied levels of success. Whatever, she’s delusional, and we love her for it.

Honestly, Alexis Bellino is an icon, and watching her launch a dress line with absolutely no fashion knowledge was a f*cking delight. Sure, she had no design background and couldn’t even give a solid definition of the word “couture” on the show, but she did the damn thing anyway. Actually, I’m not sure that the company ever really got off the ground, but she sure talked about it a lot. Alexis Couture was even less successful than her painful Fox 5 hosting segments, which is saying something. God, I love this woman.

Teresa Giudice has always been a hustler, and she’s on stranger to slapping her name (or one of her daughter’s names) onto a product that makes no sense. Her hair care line was one of many products that screeched to a halt when she got indicted for fraud, but not before she got sued for copyright infringement by a company called Milani Hair Care, which just happened to be run by Alexis Bellino’s friend. It’s all one vicious cycle. Other *chef’s kiss* businesses from Teresa include her failed Italian restaurant with her brother, her many cookbooks, and of course…

Don’t ever let anyone tell you Teresa isn’t a mogul. Teresa tried her own hand at the alcohol business, with Fabellini, a line of peach- and raspberry-flavored Prosecco. I never had the privilege of trying it, but that honestly sounds like it would make me throw up. The business shut down in 2014 due to Teresa’s legal issues, but thankfully we can still enjoy the incredible Fabellini commercial. It’s full of flavor!

Housewives love the chance to slap their names on an alcohol bottle, and the OG of the OC is no exception. Vicki decided too launch a vodka brand with Brooks Ayers (yikes), and shockingly, it wasn’t a success. I guess the world just didn’t need another reality star’s sh*tty vodka. Ultimately, the vodka business failed, and Vicki and Brooks were sued by their partner for breach of contract. I have a feeling Brooks’ business dealings are just as shady as his fake cancer.

Around the same time that Vicki was launching her vodka, she was also partnering with Tamra on a wine subscription service, Wines by Wives. Because why make your own wine, when you can just pick bottles to send to people?! The wine service provided a weak excuse for a “trip” to Malibu in season 8 to taste wines, but Vicki and Tamra got in a fight because Tamra said Vicki was prioritizing her vodka over the wine club. You love to see competing businesses!

Lisa Vanderpump has had a ton of success with her restaurants, but I’m not sure her shoe line ever actually got off the ground. Originally announced in 2011, The Vanderpump shoe was “a suede and Swarovski crystals closed-toe combination that stands on a five-and-three-quarter-inches heel in pink or black.” Sounds very 2011. The shoe was supposed to retail for a disgusting $900, but it’s unclear if they ever actually made it to retail. Personally, I’d rather wear a Maloof Hoof.

Kathy Wakile was never a business titan like her cousins Kathy and Melissa, but she still tried. On RHONJ, we saw her develop a line of DIY cannoli kits, because that’s apparently something people want? Idk. Kathy is actually still selling the cannoli kits on her website ($40 seems kind of expensive?), but they’re actually from another company, and QVC sells the same one. I have no idea if Kathy is making any money off of this, but I really hope so.

We’ve seen tons of Bravolebrities do clothing lines, but none were quite as ridiculous as LeeAnne Locken’s L’Infinity Dress. The base dress was a cute LBD, but it came with snap-on attachments that allowed it to be worn 175 different ways. Most of them are ugly AF, but whatever. Of course, true fans will remember the Thailand trip, when D’Andra showed up to dinner in the dress, and caused some major drama because she made fun of it. As of today, the L’Infinity website doesn’t seem to be working, so maybe that business stalled along with LeeAnne’s career as a housewife…

I could literally go on for days about these failed business enterprises. I mean, just the alcohol brands could be an article by themselves—looking at you, Ramona, Brandi Glanville, and plenty of others. And that’s just Real Housewives! Who could forget Jax Taylor’s Just Add X drink line? Everyone, that’s who could forget. As long as these desperate women stay on TV, they’ll keep coming out with these low-effort, high-embarrassment business ventures, and I, for one, can’t wait to see what comes next.