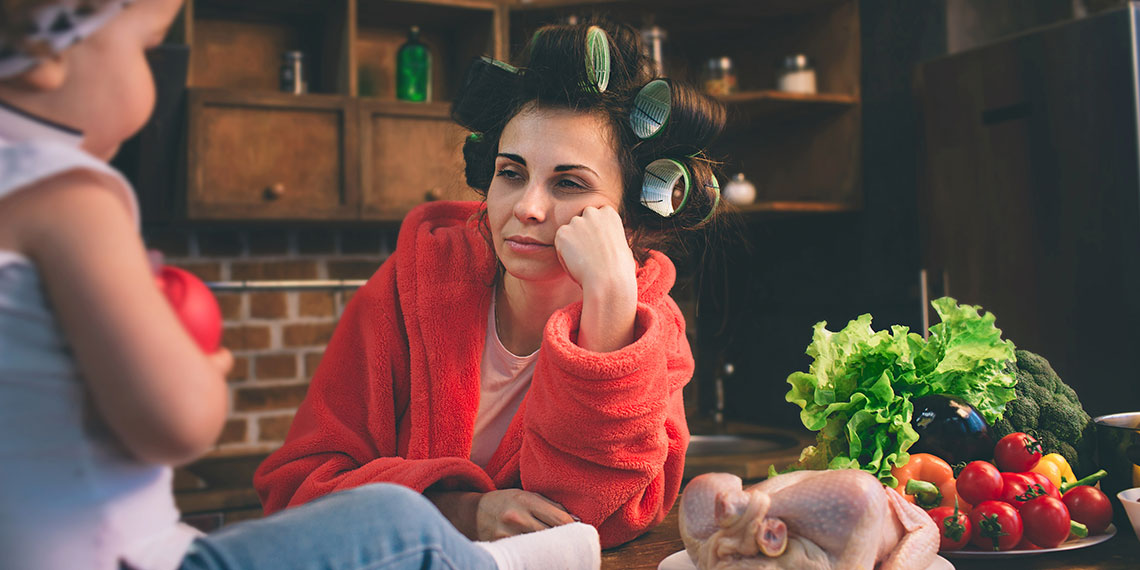 There’s pretty much nothing better to do these days than wake up and scroll through Instagram. Like every day, as a new mom, after I feed my kid and make sure he isn’t starving, dirty, or going to fall off of something, I sit and scroll through memes to waste time until he demands attention. I know that when many people thing of “mom Instagrammers”, they think of the perfectly polished women who lost their baby weight immediately upon giving birth, are always feeding their children home-cooked vegan meals, and are nothing but grateful for their little rays of sunshine. No shade to those superwomen, but that’s not reality for everyone. If your kids sometimes make you want to tear your hair out, there are a lot of hilarious, down-to-earth moms who use Instagram to post the less-than-pretty realities of motherhood. From memers who poke fun at the weird sh*t their kids say and do, to influencers who don’t only show the highlights, here are some of the realest and funniest mom Instagram accounts to follow.

This Insta account run by Anna Macfarlane is full of memes and hilarious submissions about how kids are f*cking horrible sometimes, and how being a mom means you’re tired, can’t remember the last time you took a shower, did you hair, and felt human, and when you last had an adult conversation. But hey, this makes me forget about all that for five minutes.

Mazzy and Mike challenged Harlow and I to a baking competition. BIG MISTAKE. Turns out, Harlow and I have actually learned something from all of that baking we do, and Mike and Mazzy (very ambitiously coming out of the gate with a four layer chocolate cake) ended up making a mistake that Harlow and I made back in Harlow’s Baking Show Episode 3— you need to cut off the curved top of the cake before you start to frost and layer. While Mike wanted to throw the cake in the garbage, Mazzy had other plans. Apparently, she has been listening to Harlow’s other baking advice— i.e, “everything can be fixed with sprinkles” and “if you make a mistake, JUST EAT IT.” Mazzy stuck that CAKETASTROPHE in a big bowl, put some sprinkles on top and then topped it off with a pink fondant bow. #swipeleft It was DELICIOUS. I also reminded Mazzy that her original idea for a show was “Mazzy’s Attempt to Make Something Show” and this was all very ON BRAND. #nailedit (Harlow and I still won though.)

New York mom Ilana Wiles gives you a glimpse into her day-to-day life as a mom, which includes dogs on countertops, kids occasionally being cute, and day drinking. Yay! Plus, she has a crazy cute puppy that I live to see pictures of.

NY Times best-selling author Karen Alpert’s Insta is all about helping other parents out by showing how f*cking hard it is to take care of tiny, sticky people. It isn’t always laugh-out-loud funny, but it is insanely relatable. Oh, and it has some nice feel-good sh*t too, for those of you that like the mushy stuff sometimes.

Hello, it is me. Your resident dumpster fire of a human. Follow my girl @themotheroctopus

This account is for those of us who love f*cking cursing, love our kids, and also absolutely want to lock them in a closet (only sometimes) so that we can watch anything other than Spongebob for like, one hour. This is definitely the account to follow if you love memes and miss your ho-in’ days.

When your hair becomes the main source of toddler entertainment so everyone else can eat their har gow in peace.

If you never watched her Netflix special Baby Cobra, which she filmed while she was 7.5 months pregnant, get on that sh*t. Ali’s Instagram account is full of toddlers behaving badly, trying to keep her sh*t together, and occasional glamor. She’s one of us, guys.

Sara Buckley is super body positive while keeping it f*cking real about her marriage and kids. Plus, I’m kind of jealous of her amazing hair and lashes while she’s in f*cking quarantine with kids. Like wtf? I’m over here with my hair in a weird bun, rocking the same pair of leggings on day four.

Alone time is Self Care.

Messing with her kids by making them bother their dad while reminding them they’re awesome is kind of Cydni Beer’s jam. She posts a lot of screen grabs of her Twitter account, which is f*cking hilarious. If you’ve ever wondered how to argue with your kid about how not to do something that you yourself JUST did, this is the account for you.

To the neighbors who stand outside as we take our 400 daily walks, I apologize for what you’ve heard about my crack hole.

Part of the Moms Moving On podcast, Michelle Dempsey describes herself as a parent and author. On her Instagram, you’ll find her simultaneously posting hilarious memes, workout pics, and, obviously, hilarious sh*t her kids do.