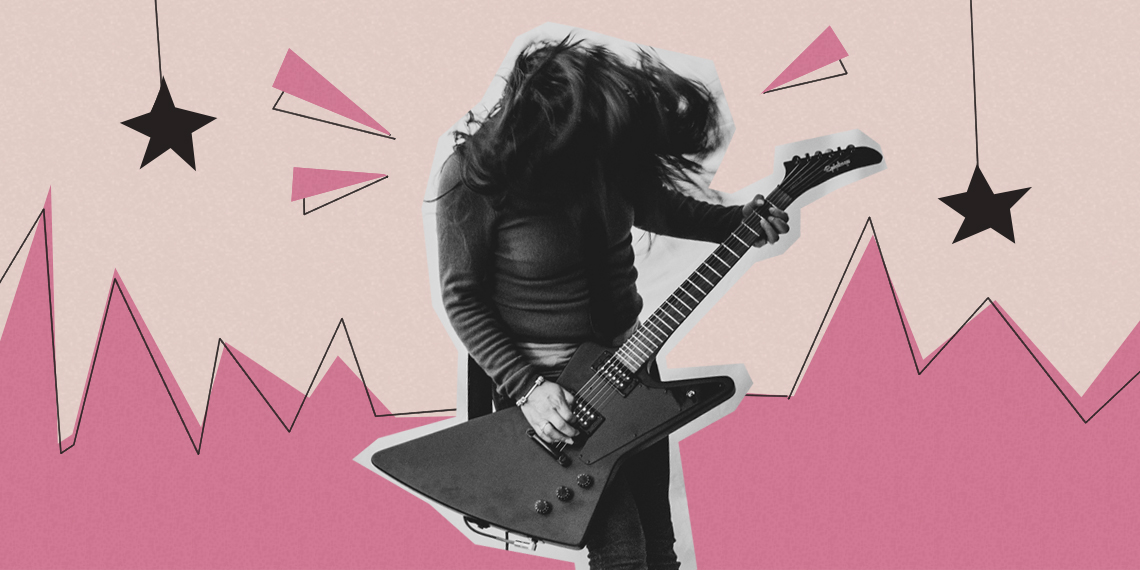 8 Female Musicians You Need To Know About

It’s no secret that the music industry (like most industries) has historically been dominated by men. In our largely misogynistic and patriarchal society, it’s easy to completely overlook female musicians, or even worse—to compliment them with the tired old adage, “she’s good for a girl!” I personally have had enough of that bullsh*t. There are so many immensely talented instrumentalists who have inspired me that deserve recognition—not only as songwriters and artists, but as guitar players in their own right. So, here is my (admittedly hipster) insight into some sick female artists you should be listening to RIGHT NOW.

St. Vincent (Annie Clark) is my personal hero. She is the first woman to design her own signature model of an electric guitar for the mass market. In terms of technical ability, she is nearly unmatched amongst her peers. St. Vincent just won the Grammy for Best Rock Song for “MASSEDUCTION,” the leading and eponymous single from her most recent album, co-written and co-produced by the sensational Jack Antonoff (who famously also co-writes and produces for Taylor Swift and Lorde.) This video is a really cool interview in which she explains the process of designing her signature guitar with the Ernie Ball / Music Man team, and touches on the marginalization she felt as a young guitar player.

Nai Palm, from one of Australia’s hippest bands Hiatus Kaiyote, is one of my favorite technicians. She has an innate ability to effortlessly float over her guitar strings while simultaneously executing complex vocal melodies, especially in live performance. The first time I heard Hiatus Kaiyote’s 2015 album Choose Your Weapon, I spent nearly a month trying to learn all of the songs note for note. It’s a masterpiece. In this live and stripped down performance for Paste Magazine, Nai Palm’s guitar prowess really shines as she plays “Atari,” a trippy song inspired by the legendary video game. Nai Palm also recently graced the cover of She Shreds Magazine, a publication devoted to showcasing female instrumentalists.

Ah, Queen Mitski. If you’ve been sleeping on her, you better wake up fast… Mitski is one of the most lyrically prolific and sonically unique artists of the last few years. She is also a multi-instrumentalist and plays both bass and guitar on her records—though her live shows have evolved into very choreographed stage performances complete with manic pacing and disconcerting arm movements. Her most recent album, Be The Cowboy, is a highly stylized piece of art with songs that clock in under three minutes and feature esoteric titles such as “A Horse Named Cold Air.” In this video from 2016, Mitski and her band perform the song that put her on the map (thanks to mad love from NPR), “Your Best American Girl.”

The Japanese House, the indie/electronic solo project of English singer/songwriter Amber Bain, just released one of the coolest albums of 2019 – Good At Falling. Featuring her signature auto-tuned/vocoded vocals, clean guitar tones, and rhythmically complex percussion, listening to Good At Falling is like sinking in to 40 straight minutes of gut-wrenching pop bangers. “Nothing feels good, I can’t fix it, it’s not right.” The dichotomy in her use of both colloquial and obscure language adds a complexity to the album not often found in music by her contemporaries. This stripped down video, however, is from a live performance of her song “Still” for BBC Radio, in which Amber has the opportunity to showcase her solid guitar playing abilities.

Brittany Howard is an absolute powerhouse. I remember seeing Alabama Shakes live for the first time at Bonnaroo Music Festival in Tennessee back in 2015, and literally losing my mind while watching this woman shred on guitar. The authority with which she plays her instrument is like that of a stern school teacher—both loving and tender, but still cheekily disciplinary. Alabama Shakes’ debut album Sound + Color, produced by Blake Mills, won them a Grammy right off the bat. Brittany uses some nasty distortion and can solo with the best of them, which are elements I try to incorporate into my own music.

Brandi Carlile was the most nominated female artist at the 2019 Grammy Awards, and a three-time winner. She has been releasing music for over a decade, but is finally now receiving broader recognition for her art. Her playing isn’t flashy. However, in its understated nature, it is the perfect companion to her profound lyricism and vocal mastery. I also straddle the line between rock and folk, and as a songwriter, Brandi has been a huge inspiration to me. She is a powerfully soft force to be reckoned with. This video is from her recent performance of her nominated song, “The Joke,” at the 61st annual Grammy Awards.

The last eighteen months have been busy for industry sweetheart Phoebe Bridgers. She has toured all over the world in support of her 2017 LP Stranger in the Alps, she released an EP and toured with her trio boygenius (comprised of Phoebe and her two friends Julien Baker and Lucy Dacus,) and she most recently released a self-titled album as Better Oblivion Community Center with fellow indie rocker Conor Oberst (Bright Eyes,) for which they are currently on tour. Known for her confessional songwriting and understated production, Phoebe is quickly becoming a household name in the folk and indie rock spheres. This video is from a dope live session done on KEXP and features my favorite song from her record, “Motion Sickness.”

Fresh off of touring with Grammy Winner Kacey Musgraves, indie rocker Liza Anne is one of my favorite artists right now. Her 2018 album Fine But Dying was my soundtrack last summer, with gritty emo-bangers such as “Paranoia” and “I Love You, But I Need Another Year.” The whole album is drenched in distorted guitar tones and introspective lyrics. This video is from a live session recorded for Paste Magazine and features a lovely stripped down performance of one of my favorite songs by Liza, “Take It Back.”

Leah Capelle is a pop/rock singer-songwriter from Chicago and is currently based in Los Angeles pursuing a B.S. in Music Business at USC Thornton School of Music. Earlier this year, Capelle released a visual for “Settle Down,” a dauntless feminist ballad exploring identity, acceptance, and empowerment. Watch it below.

Leah Capelle is a pop/rock singer-songwriter from Chicago and is currently based in Los Angeles pursuing a B.S. in Music Business at USC Thornton School of Music. Earlier this year, Capelle released a visual for “Settle Down,” a dauntless feminist ballad exploring identity, acceptance, and empowerment. We see Capelle completely vulnerable and exposed while also carrying a weight on her - a myriad of paint colors symbolizing societal projections and expectations placed mainly on women. The single - produced by Grammy-winning Jeff Bova (Eric Clapton, Celine Dion, Cyndi Lauper, Yoko Ono, Billy Joel, and many more) - dropped ahead of the new year along with Capelle’s Giants EP. Often compared to early icons like Alanis Morissette and Fiona Apple as well as buzzworthy artists such as Phoebe Bridgers, boygenius, and Molly Burch to name a few, Capelle has grown her fanbase to nearly 20K on Facebook independently thus far and is using her platform to make her voice (and yours) heard.