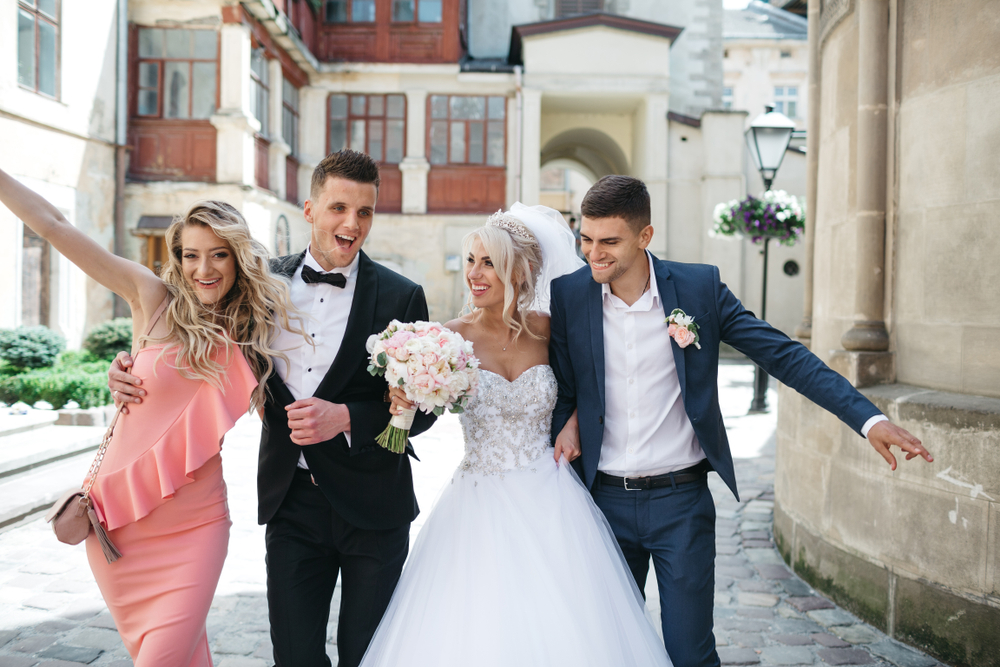 The Golden Rules Of Hooking Up At A Wedding

When it comes to attending weddings single, you have two options: You can either pout at the single table and get hammered alone, or you can put yourself out there and have an amazing time with a really hot stranger. (Moment of silence for how Carrie Bradshaw-esque that just sounded. Ew.) Anyway, while hooking up with another single wedding guest is probably the best case scenario (you bought a fucking toaster and paid to have your hair blown out, you deserve to get laid), there are a few rules regarding wedding hookups you should follow to avoid total disaster. Here’s how to hookup at a wedding without accidentally ruining anyone’s life.

1. Stay Out Of Plain Sight

While you totally have the right to the pursuit of a good time and wedding hookups, keep in mind that this is someone’s most important day of their life. It’d be kind of a vibe killer if the bride’s great aunt Agnes caught you acting nasty with one of the groomsmen in a coat closet. Make sure that there are no chances of someone old AF walking in on you and having, like, a heart attack or something.

You are not Snooki, this is not MTV, and you do not need to be Jersey Turnpiking on the groom’s college roommate on the dance floor. By all means, have a shit ton of fun dancing all night long, but don’t make it gross just to get the attention of a dude you want to hookup with. *Drake voice* This a place for families! Who drive Camrys! And go to Disney!

Obviously, I’m not saying you need to bring, like, your Huda Beauty highlighter palette, but you might want to throw some blotting papers in your clutch or something. At a heavily photographed event, you probably don’t want to be galavanting around with smudged lipstick or runny eyeliner. And hey, even if there are no wedding hookups to be had, you can use your supply kit to fix your makeup after going fucking HAM at the dessert table. Win-win.

Weddings are one occasion where you’re probably fully strapped with every optical illusion-creating, red carpet-ready product available. Between Spanx, chicken cutlets, and whatever random objects you have taped to your body to create the best version of yourself, you have, like, a million hookup disasters waiting to happen. I’m definitely not suggesting you do anything drastic like diet or workout so you can look good in a cocktail dress. I’m just saying maybe, like, sprint into the bathroom and pull off your Spanx so the rando you’ve chosen doesn’t have to watch you drunkenly struggle with them later.

5. Make Sure You’re Not Related

Okay, so. You have your cousins, and then you have your first cousins, and then you have your second cousins. That’s not right. Is it? It’s pretty gross that I even have to mention this, but if you happen to have a really huge family, it probably doesn’t hurt to slip into the lobby and do a quick Facebook creep to make sure you’re in the clear. I know this piece of advice is borderline hillbilly, but you’re better safe than sorry.

6. When It Comes To The Wedding Party, Proceed With Caution

If you’re a bridesmaid, maybe don’t decide to hookup with a groomsman after the rehearsal dinner when you have bridesmaid duties all the way until the end of the farewell brunch. If it happens, it happens, but I’m just trying to save you from any unnecessarily awkward moments. Plus, you’ve already made it through the nightmare that was the planning process. Don’t throw away months of dealing with shared Pinterest boards with a smile only to piss off Bridezilla on her wedding weekend.

7. Don’t Be A Stage-Five Clinger

Sure, there are probably a million made-for-TV romantic comedies about people meeting at a wedding, but let’s be realistic here. Casual wedding hookups are probably not the best way to meet your soulmate. Sorry. I cannot think of a more tragic scenario than ruining a perfectly executed wedding hookup by doing something insane like trying really hard to catch the bouquet in front of him moments later. Do yourself a favor and leave your crazy eyes at home for once.