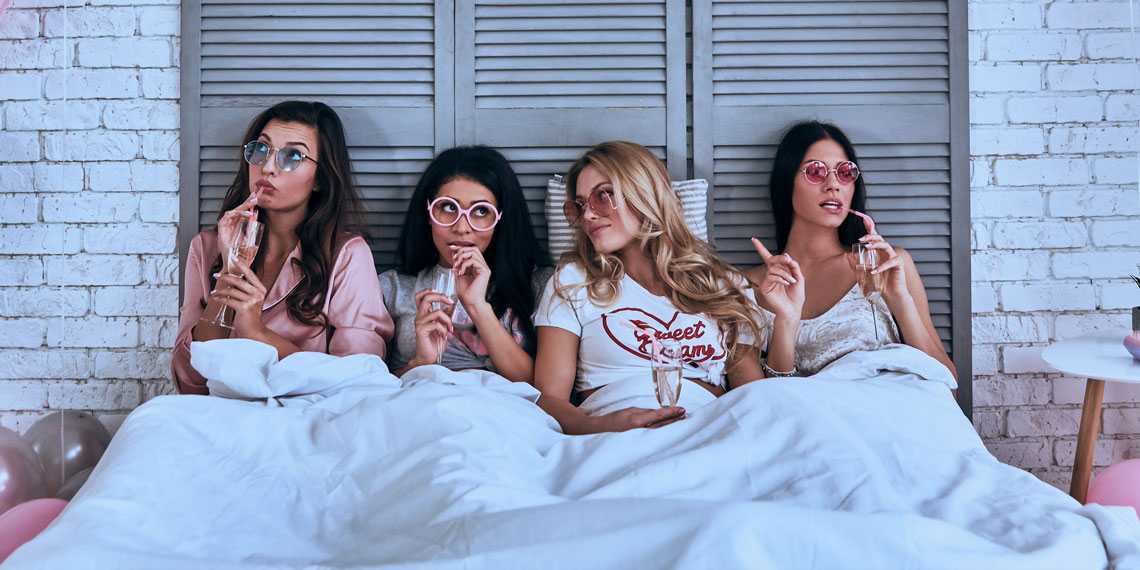 When it comes to planning a bachelorette party, sometimes it can feel like you’re trying to reinvent the wheel. Like, there are only so many options, and chances are, you’ve already been to Vegas for a Bachelorette party, whether you wanted to or not. But by the time your wedding comes around, you might be sick of Vegas or Nashville (epitome of first world problems, we know). But that doesn’t mean you have to sit around drinking wine coolers in your friend’s basement. There are still plenty of options out there that aren’t super overdone. For your own bachelorette party, mix it up with one of these unique but just as fun bachelorette party ideas that are not something you and your group have done a million times already. Jenna Miller, Creative Director at Here Comes the Guide, and the blogger girls at Inspired by This outline their fave picks below.

There is no shower quite like the one you take after a 3-day festival. That is THE shower.

If you are one of those people who has to post Instagram Stories of every concert, hit up a music festival for your bachelorette party. Just like Vegas isn’t your only option for a good bachelorette party, Coachella is NOT your only option for music festivals. There are plenty of local festivals going on year-round, featuring all different styles of music.

But if you’re into festivals but less so for music and more so for food, hit up a food festival instead. Events like Feast in Portland or LA Food Fest allow you to wine and dine your way to bachelorette bliss. Again, every city will likely have a million festivals, and these events are so common, but not all of them are good. So make sure you do your research beforehand. You actually want to have a good experience and not end up at the Fyre Festival of pizza festivals.

“What happens in Vegas stays in Vegas” so we’ve had a difficult time procuring enough data for a proper comparative analysis. But we’ve learned the bachelorette party options out there are Chippendales and Thunder from Down Under. We’re not sure which one came first, but they’re pretty much the same concept: You watch guys dancing on a stage. If you’ve ever seen the movie Magic Mike, which is a semi-autobiographical film about Channing Tatum growing up in the 90s, you’ll know this was a popular concept back then… in the 90s. Obviously, it still exists to some degree but probably in its twilight years.

You’ve probably seen, and envied, a caravan of drunk bridesmaids pedaling down a busy city street. Companies like Nashville Pedal Tavern and Denver Patio Ride allow you to sightsee, blast music, and pedal down the street while enjoying some tasty libations.

Bottomless mimosa brunches are delightful. But when you can enjoy your boozy brunch with great music and fab female impersonators? You have yourself an epic bachelorette party. Unleash your inner diva at the world famous Drag Brunch in New York and Miami.

Grab your bridal party and take a group mixology class, because it will definitely come in handy later in life to know how to mix more than a vodka soda. Companies like Urban Matter in Chicago and EatWell DC invite you to stir, shake, and sip as you learn how to make some creative cocktails.

Who doesn’t love a booze cruise?! If you visit a location with a nearby body of water, this is such a fun way to spend an afternoon—or all day! Kill a couple of hours enjoying the fresh salty air with a drink in hand. If you’re in L.A. book with a company like Pacific Ocean Charters and watch your worries wash away with the waves.